Would my ancestor have noticed an Irish connection on 17th March as he grew up in London in the middle of the eighteenth Century? Almost certainly, yes. Dean Swift in his Journal to Stella demonstrates that the wearing of crosses on this day was not confined to Ireland and that the custom had travelled abroad with its citizens as they crossed the Irish Sea. Writing in 1713 he remarks that in London “The Irish folks were disappointed that the Parliament did not meet today, because it was St Patrick’s Day; and the Mall was so full of crosses, that I thought all the world was Irish”

The traditional St Patrick’s Cross differed  according to gender: the one worn by men and boys was made of a square of paper, each side about three inches long, on which a circle was drawn. Using a quill pen and the index finger as a rough pair of dividers the circumference of the circle was used to create small arcs inside the circle. These would then be coloured, often by the children, traditionally using egg yolk for yellow, chewed grass for green – and a pricked finger for red! An alternative pattern was to draw an inner circle, ringed along its edge with six smaller circles. The whole would then be set within a larger circle and each of the constituent parts of the pattern would then be coloured. The resulting equivalent of an intricately designed Celtic cross would then be pinned to the cap and worn throughout the 17th  March.

For the girls there was a different custom: a cross was made of stiff card and pinned onto a circle of silk. The arms of the cross would then be decorated with ribbons and bows, with a rosette of emerald green silk  attached to  the centre.

The decorated cross would then be pinned beneath the wearer’s shoulder on her right hand side.     (Illustration  courtesy of National Museum, Dublin).

And the wearing of the shamrock? Well that was certainly already a custom in the 1700’s. In 1727 the botanist Caleb Threlkeld identified the shamrock as the white clover (‘Trifoleum repens’) and remarked “This plant is worn on the 17th March yearly, which is called St Patrick’s Day, it being a current tradition that by this three-leaved grass, he emblematically set forth to them the mystery of the Holy Trinity. However that be, when they wear their seamar-oge, they often commit excess in liquor, which is not a right keeping of a day to the Lord; error generally leading to debauchery.” He goes on to describe the break in Lenten fasting as being called “wetting the shamrock”

Others have identified the shamrock with other plants from the same family. But whether it was the clover or oxalis or the common trefoil, tradition had it that when the last drink was about to be drunk, the wearer removed the leaf and placed in St Patrick’s Pot (‘pota Pádraig’), delivered a toast, and then having emptied the pot or bumper, threw the leaf over his left shoulder.

So, there we have it – the day was celebrated by young and old alike, at home in Ireland but also wherever they congregated overseas, and it invariably ended up with the consumption of alcohol. It also was a pretext for abandoning the rigours of Lent for one day – observers of St Patrick’s Day felt able to eat meat instead of the wretched herring on which they had subsisted for the previous few weeks!

But those who were not of Irish extraction were always happy to use the Saint’s Day as an excuse for ribaldry and frankly racist behaviour, as shown by a newspaper report from March 1740 : 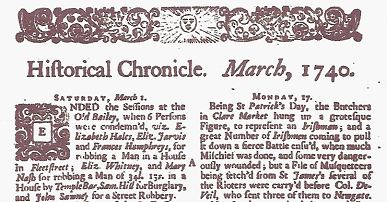 “Being St Patrick’s Day, the Butchers in Clare Market hung up a Grotesque Figure, to represent an Irishman; and a great Number of Irishmen coming to pull it ’down a fierce Battle ensu’d, when much Mischief was done, and some very dangerously wounded; but a File of Musqueteers being fetched from St James’s several of the Rioters were carry’d before Col De-Veil, who sent three of them to Newgate”.

By 1803 the celebration of  St Patrick’s Day seems to have become rather more fun …. (shown courtesy of Lewis Walpole Library). 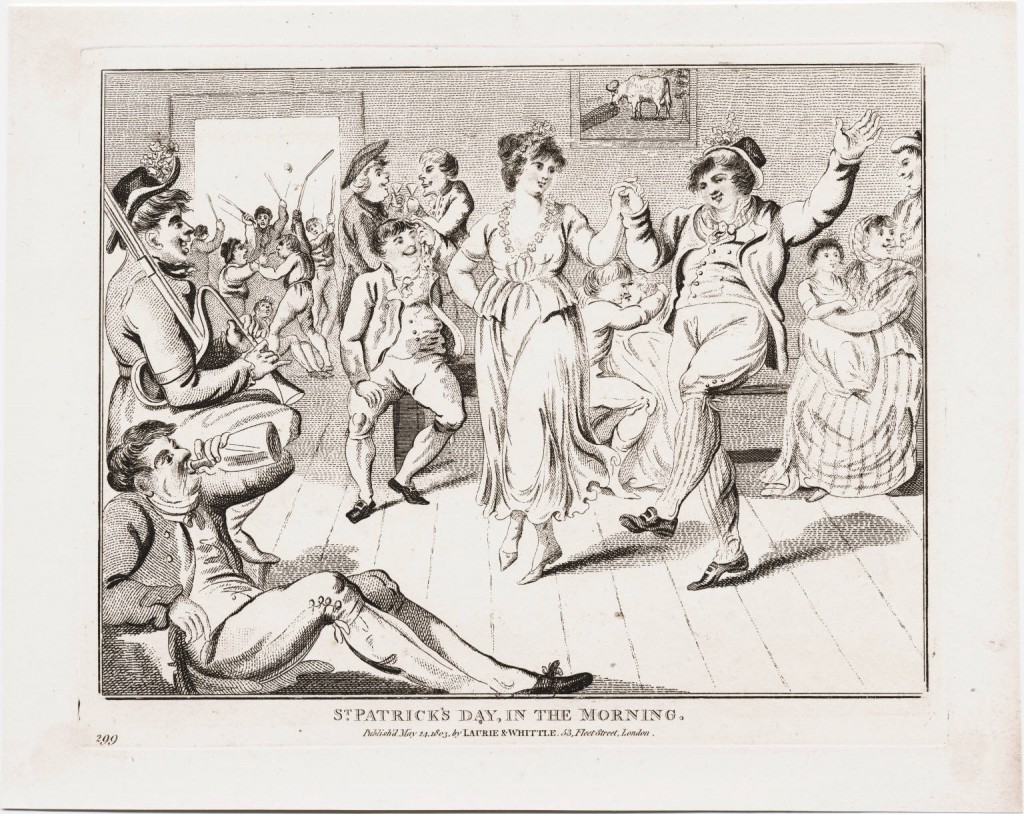 P.S. Why 17th March? Because that was the day in 432 that St Patrick, a bishop, was captured and carried off to Ireland as a slave.