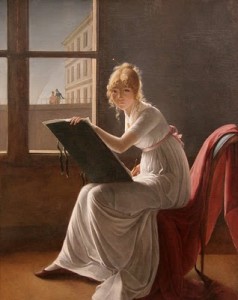 I don’t know why but I find this picture rather haunting.The subject Victoire Lemoine is also the artist, but by a nice conceit the picture suggests that it is the viewer who is the sitter, not the artist herself. Her intent stare follows you as you move.

Marie Victoire Lemoine was a Parisienne, born in 1754 and like her two sisters Marie-Denise Villers & Marie-Élisabeth Gabiou she became a painter.

She was part of a generation of women who were able to enjoy considerable success as professional artists. Before this time, women were rarely able to become artists, with a few exceptions who were all sisters or daughters of artists. This was the first period in history where a female artist was not an obscure oddity, and she was one of the first women artists to come into prominence in Paris once the official Salon was opened to women in 1791. She produced miniatures as well as oils and genre paintings.

Lemoine studied with Menageot and is thought to have been a student of her heroine Vigee LeBrun. This picture is believed to be a painting of LeBrun by Lemoine, who pays homage to her by showing herself as the pupil. Entitled Interior of the Atelier of a Woman Painter and exhibited at the Salon in 1796 LeBrun is shown palette and mahlstick in hand, pausing from work on an Antique-inspired subject, a votary of Athena, goddess of wisdom and patron of the arts, while her pupil makes a copy of it. It can be interpreted as eulogising  Vigée LeBrun as the original ground-breaker, the high priestess of female artists. The picture is exhibited at the Metropolitan Museum of Art in New York.

Lemoine waas admitted to the Academie Royale in 1783, aged 29.

I find many of her paintings too ‘soft and gentle’, just a bit too mushy. Some of the portraits are a bit ‘samey’ and with interchangeable heads – particularly of children, but here are another two I like: 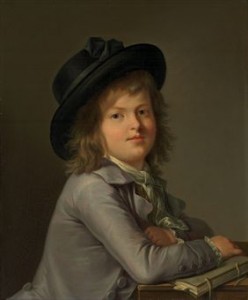 The un-imaginatively entitled ‘Boy in a black hat’ showing an unknown lad leaning on a portfolio. Shown courtesy of Christie’s, it made $23,750 when sold at auction last year.

And finally, one which really is quite striking,  showing  Zamor, page boy to Madame du Barry (the last mistress to Louis XV). It is shown courtesy of the Cummer Museum in Jacksonville, Florida. 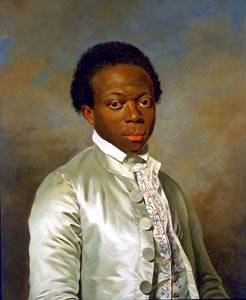