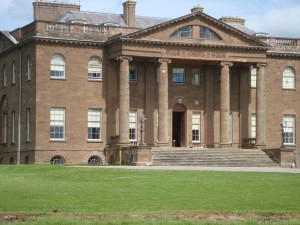 In between packing for a trip to Canada and Alaska I found time this week to get to see Berrington Hall, set in the rolling Herefordshire countryside. I had driven past the grounds, laid out to designs of Capability Brown, on many occasions while travelling between Leominster and Ludlow, but had never been in to explore the National Trust property.

It meant a seven-hour round trip by car, but was it worth it? Yes. Your first impression of the neo-Palladian house, designed by Henry Holland in 1770, may be slightly under-whelming – it is “grandeur on a small scale” in the sense that it is nothing like as impressive and in-your-face as some of the better-known and larger Georgian country homes. But then the symmetry and manageability of the house strikes you that it is far more accessible than its bigger cousins – you can walk round it without getting room fatigue, you can enjoy it without huge crowds. It feels almost homely.

And it really is a gem. The National Trust have tried hard to make it of interest to all age groups. There are walks through the parkland setting, with great picnic spots; the vista over the ha-ha separating the lawned area from the sheep munching away in the park is most effective and impressive; there is a lovely walled garden; there are boxes handed to youngsters filled with replica Georgian and Victorian toys so that they can see what their predecessors would have played with. But it is inside that the house comes alive. The rooms are beautiful and stuffed to the gills with items of interest. And, if like me, you have always wondered what it felt like to wear panniers around your waist, making you so wide that you have to sashay sideways through a door when entering or leaving the room (while wearing a two-foot high blonde wig perched on top of your head) this is the place for you! Because here you are encouraged to don panniers and wigs, and see for yourself what it was like to dress like an elegant Georgian! And no, photographs of the Georgian Gent in drag will not be released! 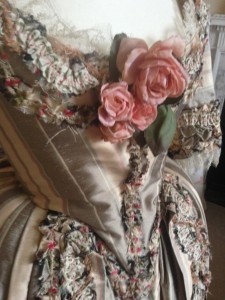 The particular reason for the visit was the exhibition of costumes from the film The Duchess. It was fascinating to be able to see the wedding suit worn by Ralph Fiennes, or the gowns sported by Keira Knightley, including the rather lovely one which is called the “drunken dress”( i.e. the one in the scene where the inebriated duchess sets her head-dress on fire by bumping into the naked flame of a candle). There is her wedding dress and a riding outfit, and you can get up-close-and-personal with the shoe buckles, the hats, the accessories which are so evocative of the times. And when the present display ends at the end of the month it is quickly followed by a new exhibition, this time showing costumes from the BBC’s 1995 production of Pride and Prejudice. 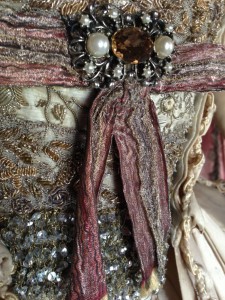 But for me the really impressive thing about the items on display was the staggering collection of costumes collected by Charles Paget Wade. This extraordinary man built up an amazing eclectic collection of costumes, furniture and effects – anything which satisfied his demands for colour, design and good craftsmanship. A few, just a tiny few, of the tens of thousands of items are shown on display at Berrington Hall – at the moment it is mostly Georgian waistcoats, exhibited under the title of “Wearing the Garden,” but hopefully other boxes will be unpacked to reveal other jewels as the season progresses. The National Trust have organized all sorts of specials to attract visitors – there is an exhibition called “Big Bottoms and small waists” opening at the start of July and running through to the end of August. There is a two-day 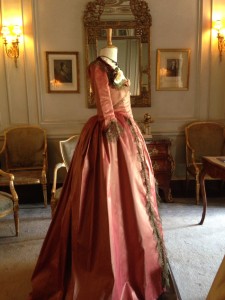 demonstration called “Dressing and undressing a Georgian Lady” by stay-maker Ian Chipperfield on 12/13 July, and with the male counterpart, the Georgian gentleman, being dressed and undressed the following week. Mmm, sounds like a busy schedule, although I stress that this particular Georgian Gent will NOT be offering his services as mannequin! 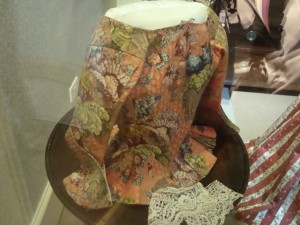 The house was originally built for Thomas Harley. He had made his name, and fortune, as a politician in London, becoming a Member of Parliament and, in 1767, Lord Mayor. Harley Street is named after him. But he retired to Herefordshire and built this stately pile, and I am rather glad that he did. It really is a Georgian gem, and with so much going on I will certainly try and visit it again during the summer.

Thanks to the National Trust for many of the close-up images – the blurry longer distance images are of course my own!