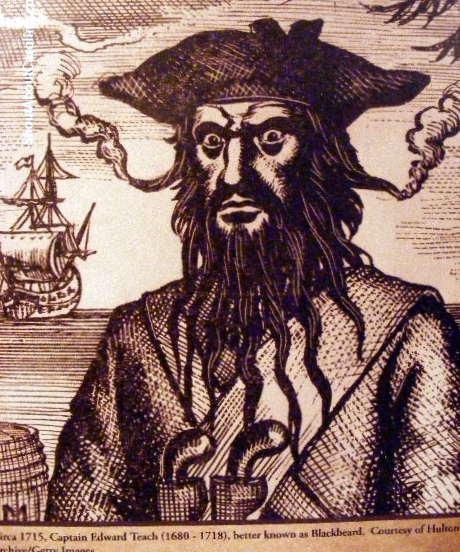 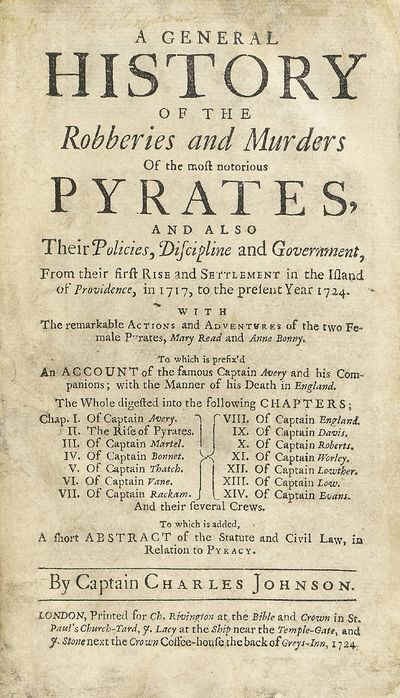 Of all the pirates in the so-called ‘Golden Age’ none typified the image of the swash-buckling buccaneer better than Edward Teach – the man known to history as ‘Blackbeard’.  Much of what we know about his exploits comes from Johnson’s History of the Pyrates, and the ten pages in that book which are devoted to Blackbeard help paint the picture of a man of ‘uncommon Boldness and personal Courage.’

Johnson states that Edward Teach was born in Bristol and was in the Royal Navy during the War of Spanish Succession, and did not hold a command until ‘he went a pyrating’ towards the end of 1716. Johnson helps show him as a man of appalling depravity, mentioning his fourteen common-law wives, the last of whom he married when she was sixteen. After he had lain with his wife all night, it was, says Johnson, Blackbeard’s custom ‘to invite five or six of his brutal Companions to come ashore, and he would force her to prostitute herself to them all, one after another, before his Face.’ No wonder genteel English readers were fascinated, but horrified, by his wanton behaviour.

Johnson also pays much attention to Blackbeard’s image – and in particular his beard – saying that it was ‘like a frightful meteor, which covered his whole face’ and that it frightened America more than any Comet that had appeared there for a long time. ‘The Beard was black, which he suffered to grow of an extravagant Length’ and apparently he twisted the ends and tucked them in behind his ears. At times of battle, he was stated to have threaded slow burning fuses into his knotted beard. ‘… his eyes naturally looking fierce and wild, making him altogether such a Figure, that imagination cannot form an Idea of a Fury, from Hell, to look more frightful.’ This perhaps was Blackbeard’s secret: he looked the part. He did not have to behave with extreme cruelty, he just had to look ferocious, sword in hand, three brace of pistols ‘hanging in Holsters like Bandoliers’ and with oily smoke swirling around his dark face. No wonder that on many occasions his victims gave up without a fight.

His surname was variously given as Thatch, Thack, Theach and Titche; the wide range of monikers may have been an attempt to ‘protect the good name of his family’ or may simply reflect the fact that in an age of widespread illiteracy, spelling accurately was not especially important and even legal documents often used different spelling in the same official deed. He may well have been living in Jamaica when he started off as an apprentice to  the pirate Hornigold. He moved his operations to the Bahamas and while working with Hornigold captured a French merchant ship called La Concord. At the time the vessel was just a hundred miles off Martinique, on a mission to deliver slaves to that island. She was able to offer little resistance when Teach appeared on the scene, because the French crew had already suffered a number of casualties (including 36 suffering from scurvy and dysentery). Teach, in command of two sloops, one with 120 men and a dozen cannon, the other with thirty men and eight cannon, quickly captured La Concord with the minimum of damage caused. The cabin boy on La Concord informed Teach where the captain had hidden a cache of gold dust – and was rewarded by being allowed to join Teach’s crew. Three other crew volunteered to join Teach, and a further ten were forced to join – pilots, cooks, carpenters and surgeons. Teach was happy to allow the remaining captives, including the captain, to continue their journey on one of his own sloops – Teach had his eyes on converting La Concorde into a fighting machine the likes of which had not been seen in the Caribbean. 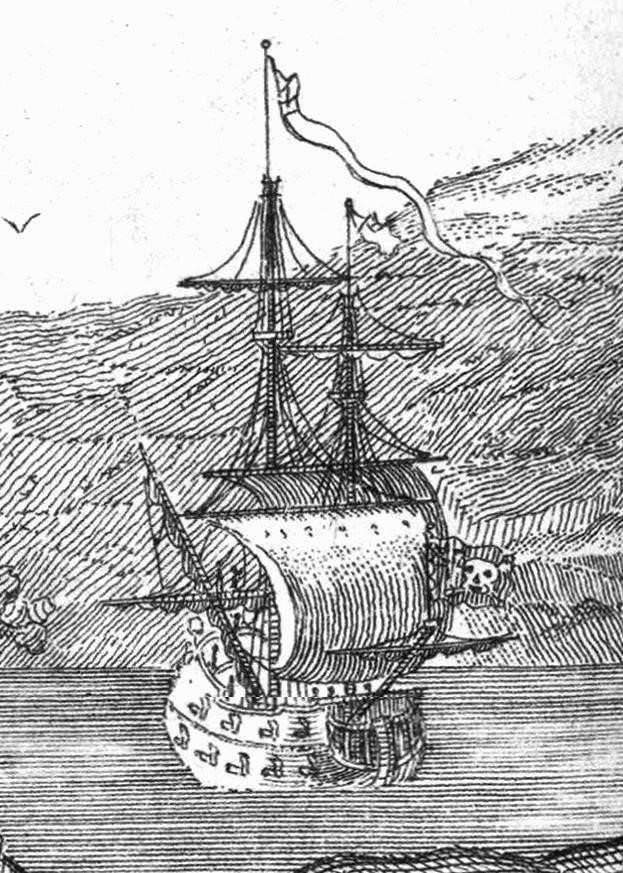 She was refurbished as a battleship, armed with forty cannon, and re-named the Queen Anne’s Revenge.  On his new flagship Teach caused mayhem as he sailed northward up the Lower Antilles, from Bequia to St. Vincent, St. Lucia, Nevis, and Antigua, seizing shipping along the way. By early December 1717 he had reached Puerto Rico. Four months later he was in the Bay of Honduras, and while there captured the sloop Adventure, under the captaincy of David Herriot. The reluctant captain was forced to join the pirates as they sailed in a small but powerful flotilla up past the Caymen Islands towards Cuba. Teach then settled on a really audacious plan – to sail up to the major South Carolina port of Charles Town and to blockade it, holding it to ransom. In particular he was in urgent need of medical supplies. The blockade lasted a week, during which time a number of vessels, including the Crowley were captured. Teach then threatened to kill all the prisoners taken on board the Crowley unless a medicine chest was delivered to him. The ‘ransom’ was brought to him, and the prisoners were released unharmed, leaving Teach to sail northwards towards Old Topsail Inlet (now known as Beaufort Inlet) in North Carolina. 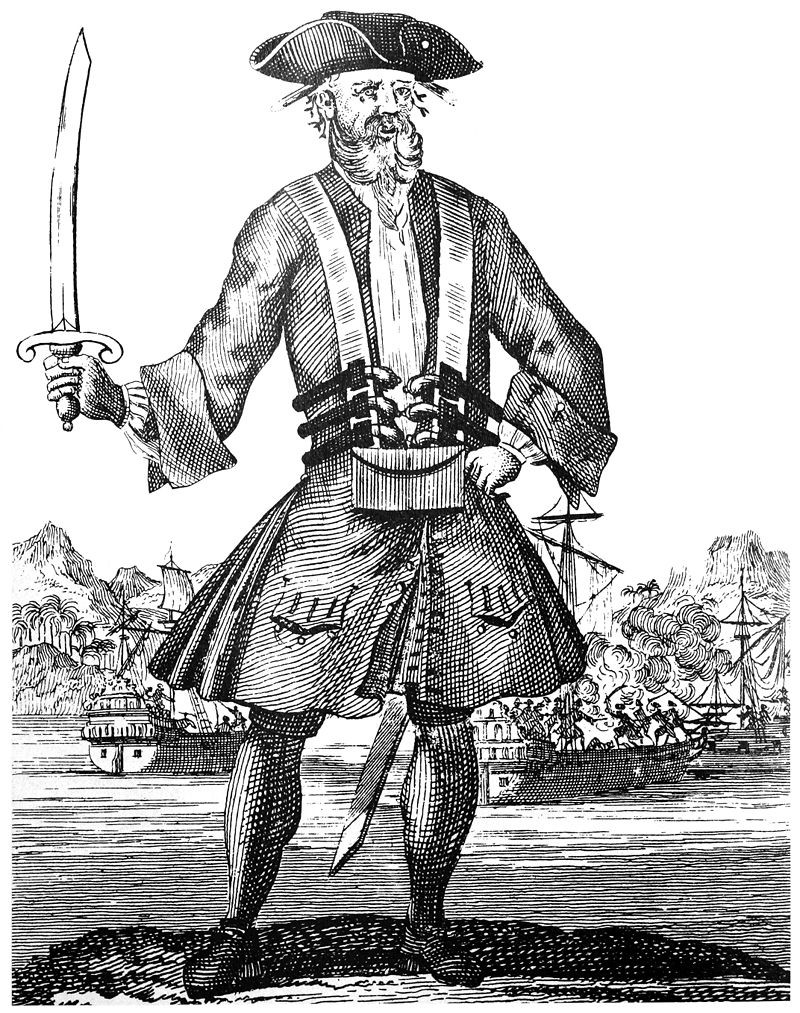 What happened next is clear enough – both the Queen Anne’s Revenge and the sloop Adventure ran aground. ‘Why’ is not so clear – the captured Captain David Herriot later stated that he thought that the grounding, on a sand bar across the front of the inlet, was deliberate. By then, Teach’s followers numbered more than 300 men, and he may have been keen to retain the plunder himself, casting many of the crew  ashore. Whatever the reason, Teach was able to sail away from the inlet with all of the spoils and a very much smaller, hand-picked, crew.

A few months later (June 1718) Teach and perhaps twenty of his crew reached Ocracoke Inlet, in North Carolina. Sailing up-river some fifty miles to the small town of Bath, Teach appears to have decided to settle down and to abandon his piratical ways.  It was at Bath that he bought a house, and according to Johnson in A General History, took a young girl as his common-law wife (as mentioned earlier). He also applied for the King’s Pardon and this was granted by the Governor, Charles Eden. It is far from clear how far the Governor was in cahoots with Teach, and certainly some have suggested that the two were close friends at this time. What is known is that Teach quickly became bored with shore-based life, and decided to resume his old career. When he re-appeared in the colony with a French merchant ship in tow he apparently told the governor that she had been found ‘abandoned’ – albeit with a cargo of sugar. The Vice Admiralty Court which was promptly called by Governor Eden came to the conclusion that the ship was derelict and hastened to award the cargo jointly to Eden (sixty hogsheads of sugar) the President of the Court (twenty hogsheads) and to Teach and his crew (whatever else remained of the cargo). This certainly suggests an element of corruption and collusion may have been present.

After a brief but boozy reunion off Ocracoke Island with his old colleagues ‘Calico Jack’ Rackam and  Charles Vane, Teach was beginning to alarm the authorities – not just in North Carolina but in Pennsylvania, and Virginia, where law-abiding folk took a dim view of large numbers of former pirates apparently wanting to settle in their midst. People had serious doubts about whether the men were complying with the terms of their Pardon, and were not convinced that Governor Eden and his cronies were willing to take appropriate enforcement action. In the end it was Governor Spottswood of Virginia who financed what was technically a raid on North Carolina territories. After a ferocious struggle Teach was killed on board his ship 22 November 1718; his head was then cut off and hung from the bowsprit of the ship commanded by the victorious Captain Maynard, Royal Navy pirate-hunter, and taken back as a trophy and as a warning to others.

In the aftermath, mass hangings of the captured pirates took place, and the news that Blackbeard, the most infamous pirate of all, had met such a grisly fate at the hands of the authorities (twenty sword lacerations to his body as well as five musket-shot wounds) sent shock waves which rippled throughout the Caribbean territories. Teach is thought to have captured more than forty ships in a career which lasted just over two years, but the manner of his appearance, and his apparent unwillingness to use violence (as opposed to threatening it) ensured his reputation as a heroic and gallant figure. After 22 November 1718 piracy was never going to be the same again, and myth took over from reality….

Edward Teach will feature prominently in a book I have just completed, to be called ‘Plunder – Pirates and Privateers in the 18th Century”. Well, that is its working title but no doubt Pen & Sword will come up with something more catchy (or, do I mean, ‘less obvious’?!). I hope to hand in the manuscript next month, so that I can then get on with my next project, which is a book about lesser-known Georgian inventors, explorers, scientists and game-changers. I have been commissioned to write it  – again, by Pen & Sword – and I need to get into writing mode immediately after Christmas. Watch this space!