Brighton Pavilion, a most impressive example of Regency exotica. 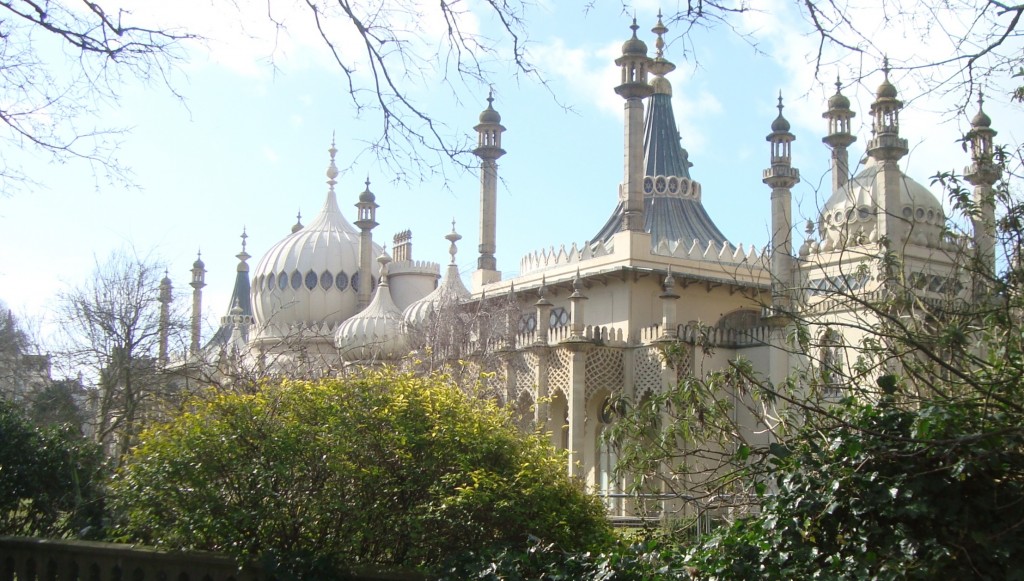 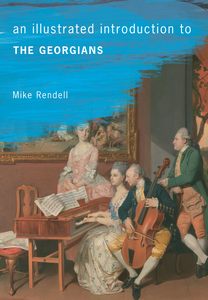 Following on from the publication of ‘An Illustrated Introduction to the Georgians’ I have been asked to co-author ‘An Illustrated Introduction to the Regency’  jointly with Philippa Sutcliffe. She just happens to be my wife, so it means that she gets lumbered with doing the research while I sit back and write what I am told….. well, that’s the theory!

But it does mean that we have the incentive to visit all sorts of Regency venues as part of the research – places such as the fine Regency terraces in Cheltenham, or Royal York Crescent in Bristol, or the splendid Soane Museum in London, about which I will blog separately. But best of all it gave us the incentive to visit Brighton and to go round the Royal Pavilion, and it really is ‘something else’!

Rather than visit Weymouth with his sanctimonious prig of a father (George III) the fun-loving Prince of Wales preferred to shack up with his rakish uncle at Brighton. For ‘fun-loving’, read whoring, drinking and gambling. So when the PoW entered into a form of marriage with the twice-widowed (and Catholic) Maria Fitzherbert he already knew Brighton well, and would escape there to get away from the prying eyes of the King and his courtiers. There are some lovely caricatures of the Prince belting along the London-Brighton road, mistress in tow. 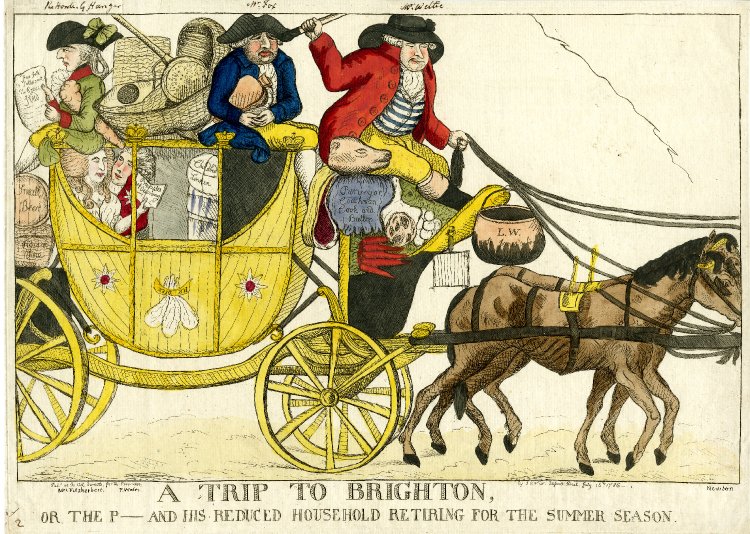 The Prince and Mrs Fitzherbert in  a 1786 cartoon by William Dent, and  shown courtesy of the British Museum. The head-bands of the emaciated horses are inscribed ‘Whim’ and’ Caprice’, and inside the coach Mrs Fitzherbert reads a book called Principles of Oeconomy.” The plume of feathers is upside down, reflecting the parlous state of the Prince’s finances.

The companion to this was ‘Return from Brighton, or A journey to town for the winter season’ and was also by William Dent, published in 1789. Louis Weltje still controls the lead horse, but this time it is a coach and four, and Fox follows on the second pair, propelled by bellows with the words ‘Motion for Increase of Income’. Atop the coach sits George Hangar, still with a shillelagh under his arm,  but this time he is holding plans for finishing off Carlton House. The fortunes of the Prince are on the up  – and his plume of feathers is shown the correct way up. Intriguingly, the first print shows Maria with a pile of  bed-linen for a child,and on their return she is shown with a baby in tow. This would appear to echo rumours circulating at the time that the Prince had fathered a child by Maria – rumours which  continued for many years. The Prince, meanwhile, looks at a paper marked ‘Town Amusements.’ This caricature is on the  excellent Lewis Walpole Library site. 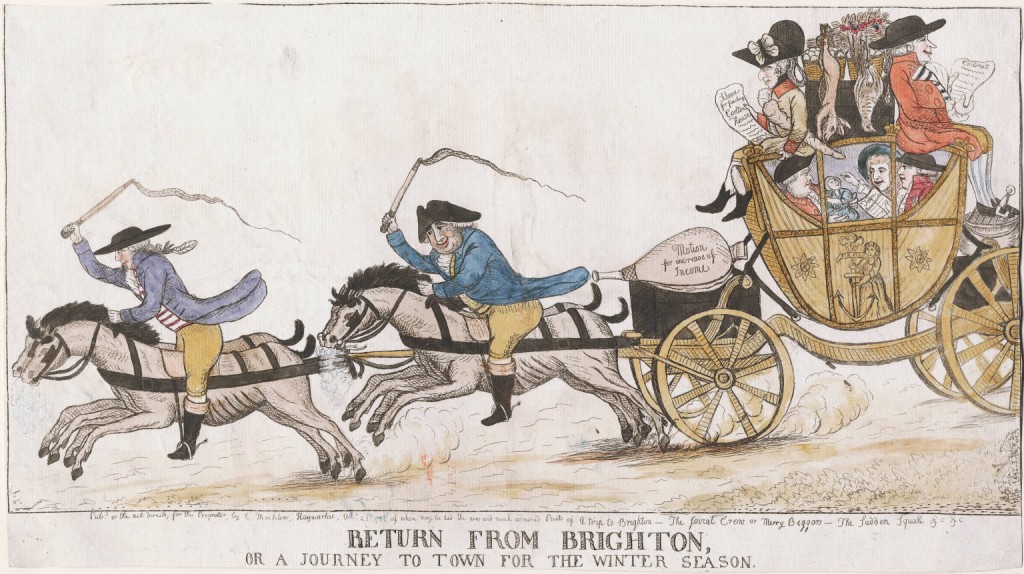 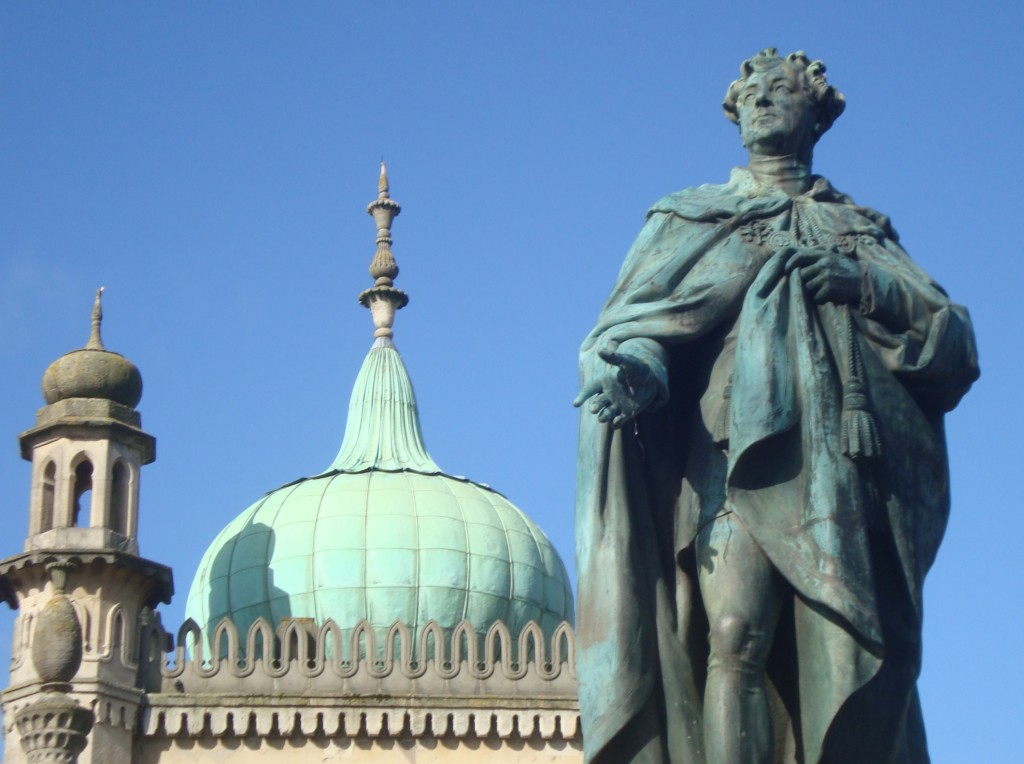 When he was in Brighton, the PoW was able to indulge his love of horse riding by building a most impressive stable building, capable of housing fifty or sixty horses. As someone remarked at the time, the horses lived in rather more comfort than the Prince and his party, who stayed in a small farmhouse. But the Prince had ideas to build a suitable magnificent retreat. Initially he commissioned Henry Holland to come up with a building in the neo-classical style, but all that changed when  he opted for something really way over the top, a building based loosely on designs for Indian palaces from a couple of centuries earlier. Drawings showing Indian palaces had started to circulate in the last two decades of the Eighteenth Century, and influenced architects such as John Nash. He came up with ever-grander plans, reflecting the change of status as the PoW moved from Prince to Regent to King. What is more, the new King seemed to regard himself as being on a par with the great Chinese emperors, so to him it was entirely appropriate that this Indian-inspired edifice (from the outside) should be filled on the inside not with Indian furniture but with chinoiserie. Loads of it, preferably heavily gilded, and hopelessly over-the-top. Here was a man for whom bling could have been invented. Amazing ceilings bedecked with flying dragons, ornate chandeliers, elaborate ‘bamboo’ furniture made out of mahogany and painted to look like bamboo,  and rooms large enough to impress a multitude – they all are concentrated into one building in the centre of Brighton, just back from the sea-front. 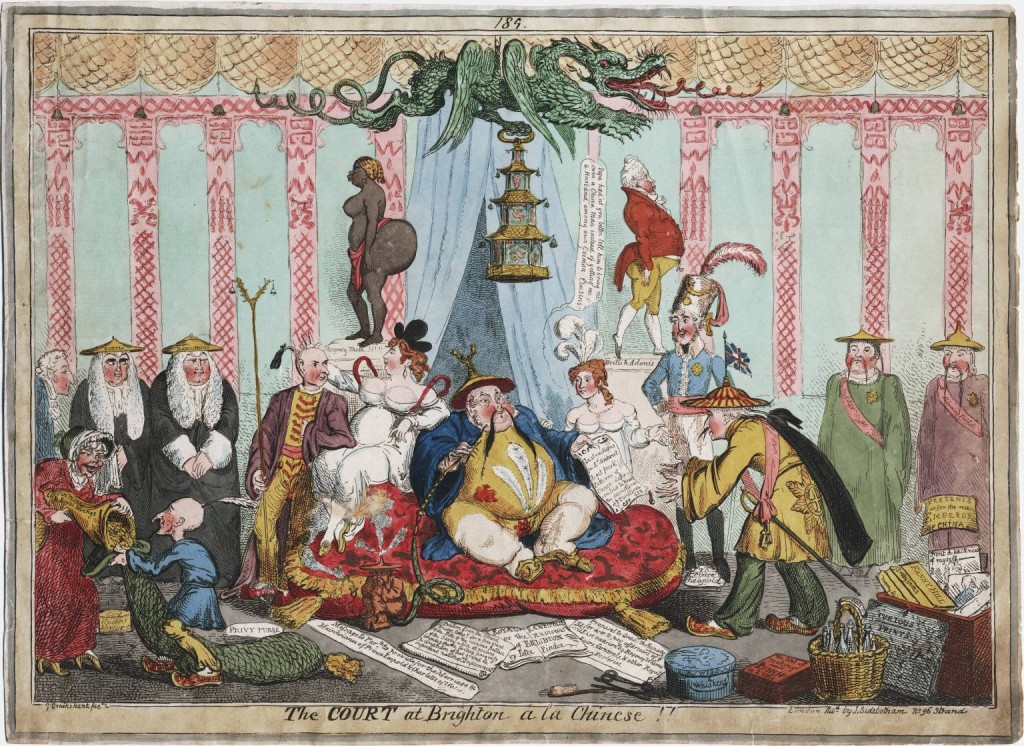 ‘The court at Brighton a la Chinese!!’ by George Cruikshank, 1816, showing the corpulent George IV as a Chinese emperor, attended by courtiers. On the King’s right sits Lady Hertford, mistress to the King until 1819, and on his left his daughter, who is suggesting that she should be married off ‘to a China man instead of getting me a husband among our German cousins’. It appears courtesy of the Lewis Walpole Library.*

I rather like the idea that whereas George IV fancied himself as a sort of Far-Eastern emperor, what the public saw was a corpulent old roué who treated his wife abominably, and spent tax-payers’ money as if there were no tomorrow. If they saw His Royal Fatness (well, his waist did come to around fifty inches….) they laughed. So, to avoid the gaze of the Common Man, the King ordered a tunnel to be constructed leading from the Pavilion to his stables so that he could go riding without being seen. Later, as he got older, the journey down to Brighton got a bit too much for the King, so he retreated to Windsor and became something of a recluse. When he died (1830) it left his brother William to finish off the Pavilion, but of course when William IV died Queen Victoria took one look at it (well, two to be more accurate) and decided that it simply Would Not Do. So she stripped out the usable furniture, and sold the Pavilion to the local authority. For Victoria, it was pointless being so near the sea and yet too far away to see it from the main rooms, and also it was a bit of a bachelor-pad, not really suited to her married status. Besides, the Pavilion is in effect an island, surrounded by roads, which meant that she couldn’t set foot outside of its grounds without being gawped at. Oh, the hardships of being royal… 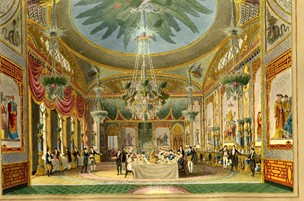 The Banqueting Hall, in a painting from the 1820’s shown courtesy of the British Museum, and showing the immense chandelier dangling from an ornate dragon. 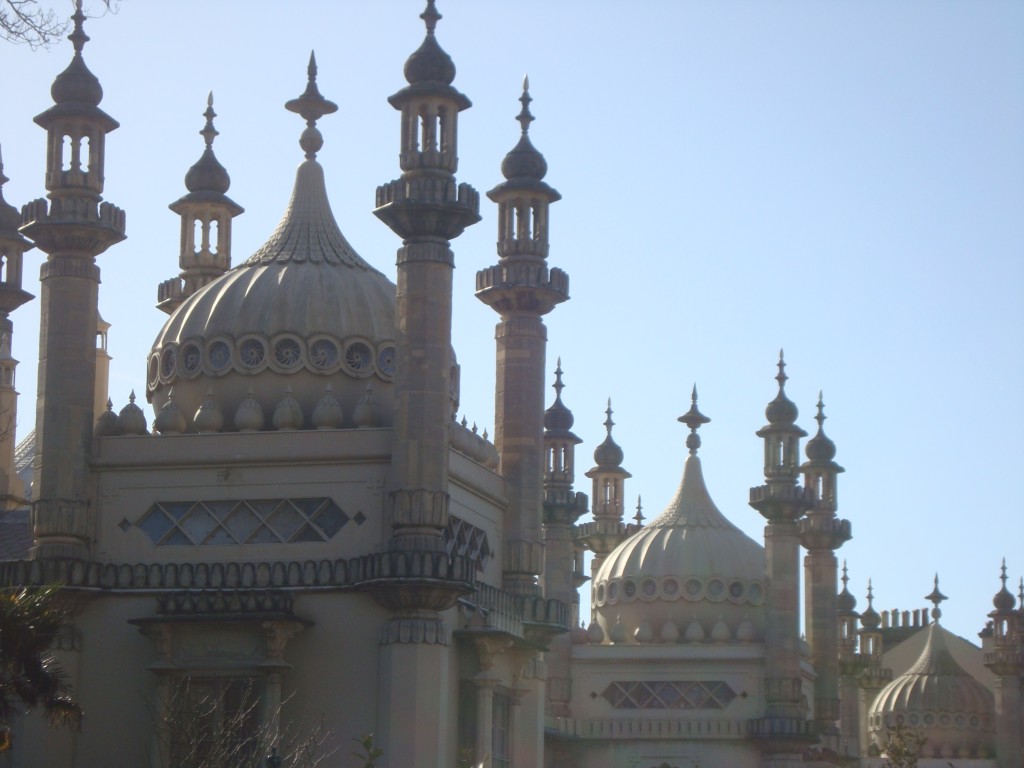 Anyway, it is well worth a visit, as long as you can avoid Brighton’s appalling traffic. I went on a Saturday and spent over one hour crawling the four miles from the outskirts of town  through to the sea-front. I am sure that there are short-cuts for those in the know, but for those of us who simply follow the SatNav and have to wait for every temporary set of traffic lights, and endless road-works, it is a nightmare! And when you arrive, parking is difficult, so next time, I will go by train…

* I assume that the figure of a native woman on a pedestal, shown above the portrait of Lady Hertford, represents  Saartjie Baartman, known at the time as “The Hottentot Venus”.  She spent some years traveling in Britain and later in France, being exhibited in what was in effect a freak show, amidst great interest on account of her prominent buttocks. The poor woman died in 1815. Brief details appear here.

1 thought on “Brighton Pavilion, a most impressive example of Regency exotica.”