In just about every cartoon of Napoleon the Emperor is shown as being of below-average height. Cartoonists loved to belittle the man – and yet he was five feet six inches tall (at a time when the average Frenchman was three inches shorter than this! We even talk of a ‘Napoleon Complex’ (short man, big chip on shoulder) and yet his lack of stature seems to have been a product of British propaganda. Perhaps it stemmed from the fact that he surrounded himself with officers from the Imperial Guard, who were chosen for their tall stature and whose height was then topped by plumed helmets. But I suspect it was all down to an attempt to make Napoleon appear weaker and more insignificant – the equivalent of the Second World War contention that Hitler only had one, and that Himmler was very similar… 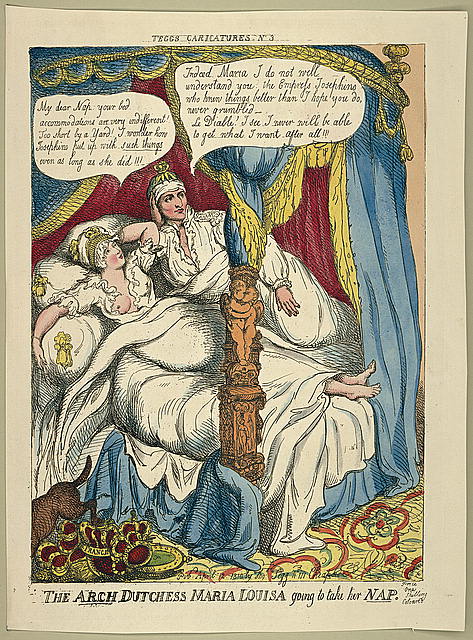 As an example of a beautifully scurrilous cartoon here is one of my favourites: taken from Teggs Caricatures and entitled “The Arch Dutchess Maria Louisa going to take her Nap”. The Emperor had divorced his first wife Josephine, and had chosen as his new bride someone he had never met and who only learned of her betrothal after the French and Austrian governments had already completed all negotiations. Maria Louisa was only nineteen, and had been brought up to detest the French, so her marriage must have been something of a shock to her system to say the least. But ‘she did her duty’ and bore a son within a year of marrying the Emperor in 1810.

The cartoon shows her in bed, feet sticking out at the bottom, while she says “My Dear Nap: your bed accommodations are very indifferent! Too short by a yard! I wonder how Josephine put up with such things even as long as she did!!!” to which ‘Nap’ replies:

“Indeed Maria I do not well understand you: the Empress Josephine who knew things better than I hope you do, never grumbled. La Diable! I will never be able to get what I want after all!!!”

There is of course the underlying implication that Maria Louisa is talking, not about the length of the bed, but about her husband’s manhood. His first wife Josephine knew about ‘these things’ because of her allegedly adulterous affairs, whereas he hoped that the virtuous Maria Louise was a complete innocent! Poor Napoleon: in his first marriage he was ridiculed for being unable to satisfy his wife’s demands (we still chuckle at the thought of “Not tonight Josephine”) and in his second marriage the cartoonists suggest that he wasn’t getting it at all ! It just goes to show, there is nothing new under the sun about making jokes about the lack of sexual prowess of your enemy!

As today, 15th August, is the birthday of the great/little man (depending on your viewpoint) I offer this post by way of an anniversary greeting!