Among the papers listed in Richard Hall´s inventory of items at One London Bridge was a second edition of Dr Buchan´s Domestic Medicine. I still have the book. Buchan was a remarkable man in many ways, and his book had an astonishing success, being reprinted over 22 times and being hugely influential both in the UK and the United States, where it was published in both New York and Philadelphia. 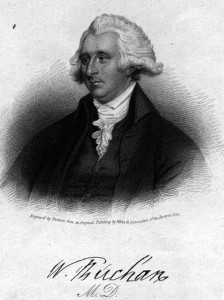 His masterpiece was more than just the 18th Century equivalent of the Readers Digest Book of Home Medicine – it was a ground-breaker in many ways. Buchan had been born in Scotland in the same year Richard was born – 1729. It had been intended that the young Buchan would go into the Church but his interests were inclined elsewhere and he graduated in medicine from Edinburgh University. After a spell in Sheffield he returned to Edinburgh in 1766 and spent a number of years in one of the poorest areas in the country, and was confronted with the ignorance about basic hygiene and cleanliness which he could see was causing pain, suffering and premature death. Indeed he was so upset at seeing that half of all children were dying before their teens, largely through unhygienic conditions, that he determined to end the mystique which went with the job of being a doctor, and encourage the public to understand the importance of hygiene in order to prevent illness. This was revolutionary – until then most treatises were a mixture of witchcraft and mumbo-jumbo. Rather like the Magic Circle trying to guard the secrets of the magician´s trade, the medical profession frowned on such openness. But in 1769 Buchan published the first edition of his Domestic Medicine and it became a runaway success with the public. The book cost six shillings and the 19 editions published in his lifetime sold 80,000 copies. The work was translated into many European languages including Russian French and Spanish.

We may find the advice somewhat rudimentary but Buchan was working at a time when washing was a rare occurrence. After all, Richard Hall´s own diaries record that he only bathed once every three months. Any lesser interval and he states that ´he resumed his bath´ as if it was part of a single process. 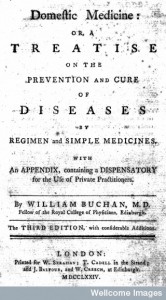 Picture courtesy of the Wellcome Institute

What Buchan was trying to do was to point out that hygiene was something that the public could embrace as a form of self-help. He also called for the provision of pure water supplies, publicly cleaned streets, and advocated the benefits of fresh air. Exercise and a good diet were also a part of his campaign. We may not think of his ideas as revolutionary – but they were at the time. Look at some of his quotations from the Domestic Medicine.

“The want of cleanliness is a fault which admits of no excuse.”

“Diseases of the skin are chiefly owing to want of cleanliness.”

“Nothing can be more preposterous than a mother who thinks it beneath her to take care of her own child, or is so ignorant as not to know what is proper to be done for it.”

“Sufficient exercise will make up for several defects in nursing; and it is absolutely necessary to the health, growth and strength of children.”

“The clothing of infants is so simple a matter, that it is surprising how any person should err in it; yet many children lose their lives and others are deformed by inattention to this particular.”

“A child never continues to cry long without some cause, which might always be discovered by proper attention.”

“Allowing children to continue long wet is another pernicious custom of indolent nurses.”

He even appears to have recognized the problems of inherited diseases, with the advice “A person labouring under any incurable malady ought not to marry.”

Buchan´s book is divided up into chapters for different types of ailment, and contains guidelines on what treatments should be given. He explains, for instance with broken limbs, the diet and regime to be followed by the patient. He lists how to make poultices and plasters; infusions and ointments; what herbs should be applied, and so on. And if we dismiss them as being unscientific we are to miss the point – he was encouraging people to understand about illness from his admittedly 18th century viewpoint so that people could help themselves.

Did the book´s success make him rich? Apparently not, since according to one story he sold the copyright to his publisher for £700 pounds, only to see the publisher recoup as much every single year from sales!

“ In 1778 Dr Buchan moved to London where he gained a considerable practice. He was known for his convivial and social habits, one of which was to frequent the Chapter Coffee House, a haunt of authors and the publishing trade. Full of anecdote, of agreeable manners, benevolent and compassionate, he was unsuited to make or keep a fortune, for a tale of woe always drew tears from his eyes and money from his pocket. It’s little wonder that the Doctor, by then a handsome and genial white-haired Tory, often served as moderator for the “Wet Paper Club”. This band of early morning paper readers assembled daily at the “Chapter”, as it was familiarly known, to discuss the news of the day. The men, as they all were, grabbed the papers as soon as they were delivered, still wet from the printing process, before the coffee house waiters could dry them.”

Buchan died in 1805 and was buried in Westminster Abbey. Intriguingly three years later when the mutineers from the Bounty were discovered on Pitcairn Island it was found that they had kept a copy of Buchan´s book with them, wrapped in sail cloth.

Helpfully the book has now been digitized. One such site containing the work can be found at http://americanrevolution.org/medicine.html

(This post is a re-working of a blog I previously did on Posterous, but I felt it deserved another airing.)