An historic painting showing Calke Abbey before the rot set in…

Talk about going from the sublime to the ridiculous: the day after going round Chatsworth, where millions of pounds are being spent on keeping the building in its glorious splendour, the next day I visited Calke Abbey, an extraordinary edifice which has been neglected for almost its entire 300 year history. It is situated in Derbyshire, right on the border with Leicestershire. It was transferred to the National Trust in 1985 in lieu of some 8million pounds in estate duty, and what they took over was a building which has a remarkable past. So many houses fell into disrepair after the First World War and were allowed to fall down or were destroyed, but this one somehow survived and is being preserved as a sort of time capsule of neglect. If damp has got into the fabric and left wallpaper damaged and in tatters, the Trust carefully removes the paper, repairs the damp – and then reinstates the damaged paper so that to outward appearances it looks unchanged.

We aren’t talking here about ‘shabby chic’ – we are talking plain shabby!

The house was built between 1701 and 1704 by Sir John Harpur, 4th baronet. The Harpur’s seem to have been an odd lot, and by all accounts were not exactly sociable. For a start there is no grand set of steps leading to an impressive entrance on the first floor. Instead, the only entrance is into the servant’s rooms on the ground floor. Clearly, the Harpur’s did not want visitors. Equally they didn’t want change. The telephone did not arrive at Calke Abbey until 1928 It was presumably used in 1962 when a family member asked an electrician to come round. He must have had the shock of his life when he discovered that he wasn’t just doing a spot of re-wiring – he was installing an electricity supply for the very first time.

The rot started, literally and metaphorically, with the seventh baronet. He was a loner, and a bit of an eccentric. He was also in receipt of an income of around £10,000 a year. He rather went against convention by marrying one of the maids, called Nanny Hawkins, and he died in 1819 when thrown from his carriage and landing on his head. Successive owners  inherited his reclusive nature and spent their time collecting things. Dead things mostly, or at least they were by the time they had finished with them. They particularly liked collecting birds, which they then stuffed and put into glass cabinets. There are literally hundreds of these. And if going to bed sharing your room with half a dozen cabinets containing stuffed seagulls is your idea of bliss then this is the place for you. Then there are the sea shells and mineral samples. Room after room after room, crammed full with  assorted rocks and old shells. No attempt has been made to tidy them, The National Trust must be grateful that a previous attempt to pay death duties had meant that many other collections (butterflies, stuffed animals etc) had already been sold.  What remains is an impressive cull of wildlife – there are stags heads and horns everywhere.

I was interested in the caricature room – a small room off the entrance hall where caricatures by Rowandson, Gillray  et al are pasted all over the walls. I had assumed that gentlemen collected these as sets and kept them in portfolios where they could be inspected at leisure, but the Harpurs obviously preferred them as wallpaper. Weird. Unfortunately the light levels are kept so low that you can barely make out the caricatures in the perpetual gloom which pervades the display, but that is true of most of the house. Daylight will otherwise destroy what little  has been left.

The gardens at Calke Abbey

The National Trust have halted the decline and in the case of the beautiful gardens have done a fine job of showing what the place would have looked like. There is I am told a rare early example of an auricula theatre – actually the staging is used to display pelargoniums, and there isn’t an auricula in sight. One of the two gi-normous walled gardens has been brought under control and  has been planted up with vegetables and soft fruit, and work is underway to restore some of the tunnels which were presumably meant to enable the gardeners to move around without ever having to bump into his Lordship. There is a brewhouse, an orangery, and a fine stable block. There is also a grotto and an ice house. And there is a wonderful old deer park full of fallow deer and rotting tree stumps. 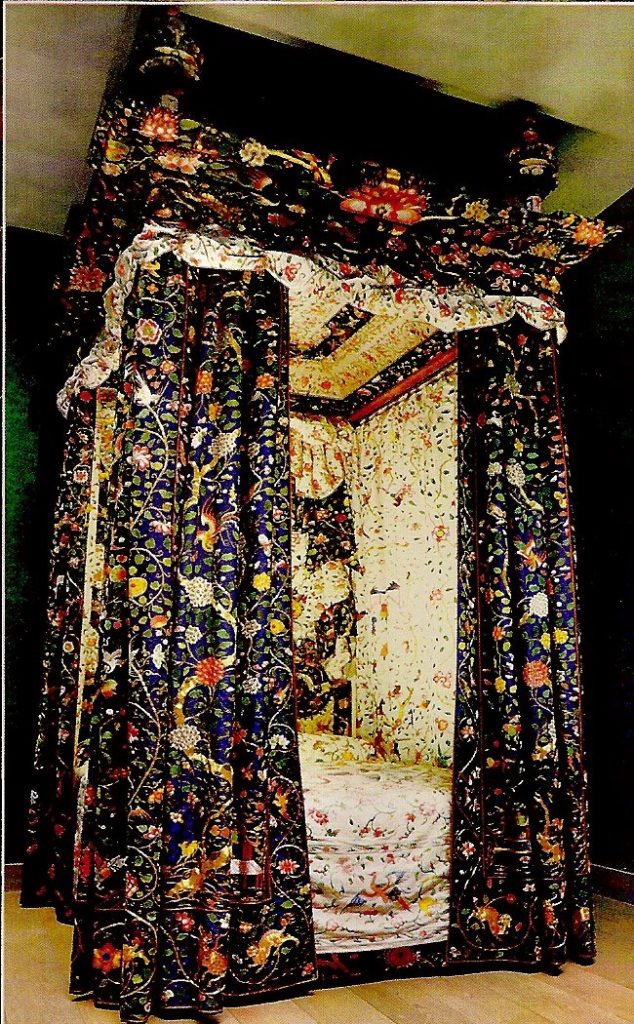 The ornate bed hanging, which has never seen the light of day….

It certainly makes for a different day out – seeing how the other half lived ie surrounded by money but in absolute squalor. But there is one item on display which really is remarkable. When George II got married his bride Catherine of Ansbach had a number of bridesmaids, one of them being the daughter of the Duke of Rutland. When the girl got married, to one of the Harpur clan, the Queen kindly packed up and sent round a wedding present of a sumptuous bed hanging. But there was a problem : the bed needed to display this opulent gift would have been higher than the ceilings in the principal bedrooms, so the gift was packed back into its mahogany cases, and left. It was therefore still in all its magnificent ‘as new’ state when the Trust decided to display it 250 years later. Ironically the one room where the right-sized bed could be accommodated was in the servants’ quarters and so you have this odd spectacle of  passing through from one poorly lit  room to another, filled with junk and servanty-things, before encountering this wondrous bed with all its drapes. I must admit I had to go back to the National Trust shop to buy a postcard in order to see what it really looked like, because you cannot really make out the vibrant colours in the all-pervading gloom, and the images on this blog either come from the NT, or via Wiki.

All in all a strange place to visit. Part beautiful, part melancholy, part impressive and part pointless. But certainly a contrast to Chatsworth. And that bed has to be seen to be believed….