I recently completed a round-Britain lecture cruise on board the Crown Princess, which involved visiting a couple of places in Ireland. Well, three in Ireland (Cork, Dublin and Belfast, but I only visited Cork and Dublin. Somehow Belfast doesn’t ‘do it for me’ so I gave it a miss….)

It reminded me that I had done several blogs linked to Ireland so I thought that I would re-visit some of them. First up – the remarkable story of Charles Banconi:-

For a change, travel back to Ireland and visit  Hearn’s Hotel, at Clonmel, Co. Tipperary. It is the sixth of July 1815, and a small jaunting carriage pulls away exactly on time, heading for Cahir some ten miles or so away. The jaunting carriage was a slightly odd two-wheeled conveyance, unprotected from the elements, where the seats were in a row facing sideways onto the road. This day there were no passengers – the six seats were all unoccupied, and the single horse has no difficulty plodding its lonely journey. The same thing happened the next day, but then the 31-year-old Italian printer whose idea it was to set up a coaching service decided that it was a case of ‘double or quit’. So he arranged  for two jaunting carriages to be ready and waiting at the appointed hour on the following day, both ready to make the journey as advertised to the good burghers of Clonmel. To observers it looked as though there was a competition. That certainly attracted public attention, and before long there were dozens of people queuing to make the two-hour  journey, at a rate of a penny-farthing a mile. It was certainly a darned sight quicker than the five- to eight-hour journey offered for the same trip by boat. 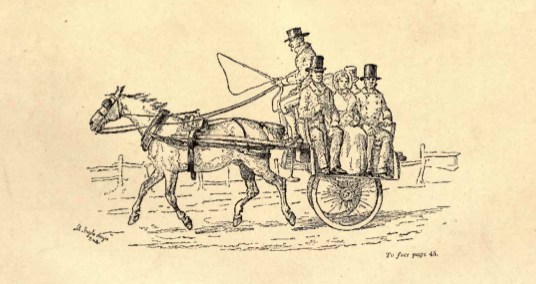 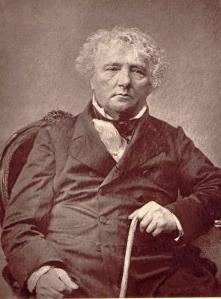 Journeys in Ireland were incredibly slow at the time – the roads were poor, travel was in its infancy, and there was no integrated transport service. It would be another thirty years before rail travel opened up the countryside, and in those thirty years the coach service mushroomed in a most remarkable way. And the man behind it? Charles Bianconi.

Carlos Bianconi, born on 26 September  1785 at Tregolo in what is now Lombardy in Italy, had escaped from his mother country just before it was over-run by the forces of Napoleon. He was relatively poorly educated – the priest at the local school he attended described him as a ‘troublesome dunce’ who left school ‘almost as ignorant as when he entered it and a great deal more wilful.’ As a 16 year old he had travelled to England but then moved across to Ireland, and was apprenticed  to the owner of a print-shop. Selling the prints took him around  Dublin and its neighbouring towns and villages, usually on foot. He would  peddle the prints which he carried in his satchel as he walked from town to town. Eventually he set up his own print and engraving shop in Clonmel, and as the business started to expand he travelled around on the appalling roads to deliver his wares, often stopping to give a lift to pedestrian travellers. No doubt it was this which gave him the idea of providing a public transport service, given that the only alternatives were the prohibitively expensive Mail Coaches. 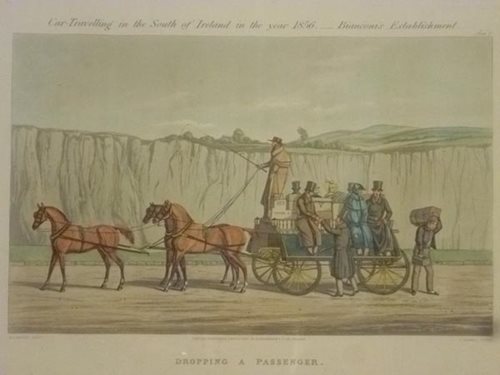 Shortly after he launched a separate coaching business he was fortunate to be able to buy a number of ex-Army horses (no longer needed following the Battle of Waterloo and the end of the Napoleonic Wars). These magnificent animals, well-trained and strong, could be picked up ‘for a song’ – well, for between ten and twenty pounds – and the coach business expanded quickly, with new routes being added until  they criss-crossed the country. Bianconi started to build his own coaches, eventually moving up to a twenty-passenger long-coach. They were known as ‘Bians’ or Bianconi Coaches, and soon became a familiar sight everywhere. Coaches meant coaching Inns, and a network of Bianconi Inns were developed, some of them still remaining to this day.

The business was at times seriously under-capitalised but an interesting account in the Irish Story – an online history blog, comes up with this information:

“In 1826, came the famous Waterford by-election when the Beresfords – landlord family who had dominated that county’s politics for 70 years – were ousted by the Catholic Association party of Daniel O’Connell – campaigning for Catholic Emancipation.  Bianconi had actually been retained by the Beresfords (who were staunchly opposed to Emancipation) to transport their voters to the election, but feelings were running so high that he felt his drivers to be endangered and asked to be released from his contract. The Beresfords reluctantly agreed, and Bianconi was promptly retained by the O’Connell supporting team. He may well have been partly responsible for their resounding success, but from his point of view the important thing was that he was paid £1,000 (perhaps as much as €1,000,000 in today’s values) for his services. This was the capital he needed.”

The scale of operations was remarkable. Here are just some of the statistics:

*  By 1845, Bianconi was one of the largest proprietors of horses and vehicles in the whole of Europe, with a fleet of one hundred cars,  and 1,400 horses.

*  He employed a hundred drivers as well as  130 ostlers to look after the animals.

*  He was  twice made mayor of Clonmel.

* He was renowned for looking after his staff, knowing all of the drivers by name, and when they were too old or infirm to work he provided them with food and lodging in his cellars at his house at Longfield House, Boherlahan, County Tipperary, referring to them as his “fireside fellows”.

*  When the Great Famine came, he famously employed his men to carry out maintenance work at his beloved Longfield House with its 1000 acres of prime farmland, rather than see them starve.

And when the railways eventually arrived, Bianconi wisely arranged his coach itineraries to include the railway stations which his passengers would then use for their onward journey. Oh, and he invested his money in the railways themselves, thereby securing his future when the coaching side of the business declined. He died, a multi-millionaire in today’s terms, in September 1875, at the age of 89. The story goes that as he died the sound of a phantom coach was heard clattering up the long driveway to the house….

I am indebted to the historian Turtle Bunbury for some of the facts used in this article, based on his blog here. Thanks too to Stephen Lombard for first regaling me with the story of Mr Bianconi and his coaches – and for showing me the prints made in the 1850s showing the Biancs in use. It is a remarkable story, especially for  a man dismissed as a dunce. Nowadays, immigrants tend to get a bad press. Here was an immigrant who had the imagination and courage to transform the world around him…

3 Responses to “Revisiting Charles Bianconi – Ireland’s King of the Road.”