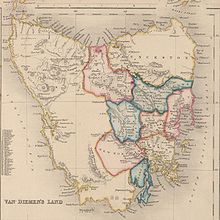 Visiting Tasmania makes you appreciate how hard it must have been for the early settlers towards the end of the Georgian era. Hobart was founded in 1804 under the control of Governor David Collins. At that stage it was still regarded as being ‘Van Diemen’s Land’ and the fact that the island was separate from the Australian mainland had only been discovered  five years before by Captain Bass (after whom the straits are named).

Getting there from Britain involved a journey of at least two months, sometimes longer. And when the settlers arrived, it must have been extraordinarily difficult carving out a livelihood in a land with no infrastructure – no established communities, no roads, no proper medical facilities. Those arriving were met by the gruesome sight of the gallows, where felons were hanged, and the gibbet where the corpses were left to rot. Some welcome! For Tasmania was a penal colony, and miscreants were sentenced to death for a myriad of minor mis-deeds. 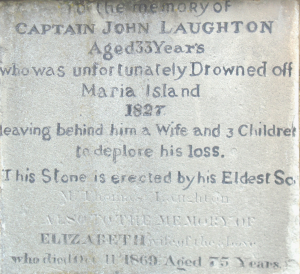 Initially the main  opportunities for employment centred on whaling and fishing. But both were cruel masters. This was brought home to me when I visited the churchyard of Tasmania’s oldest church in Hobart. Here is one – just imagine how Elizabeth, the surviving widow  of Captain Laughton, must have struggled to bring up three children without a breadwinner and no social support! But survive she did, living another 42 years before her death in 1869.

Then there was the infant mortality rate. Look amongst the graves and you will find numerous poignant memorials: Here is one of them: 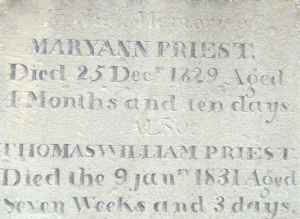 Those arriving on the island of their own free will had to face one other problem – a drastic shortage of female company! This got so bad that a committee was formed to try and encourage female immigration. Advertisements were placed in British newspapers. Finally, in 1851 The Beaulah docked at Hobart, carrying 169 single women. It must have been quite an eye-opener for the women – most of them were good Catholic girls from Ireland! The eligible bachelors waiting for them were neither good nor, in general, Catholic, but somehow or another the newcomers settled in and helped found the family units which struggled to tame the island in the years which followed.

Time and time again you come across records of people who died as children, or as young adults. These are memorials to people who crossed the world to make a new life, generally without support from older family members. A hard life indeed. The gravestone on the left is for a 27 year old ‘free settler’ (to distinguish him from a deportee) and on the right for a 12 year old ‘native boy’ named George Weston who for five years had been under the protection of Charles Connelly. 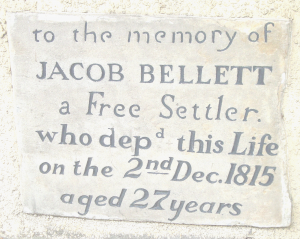 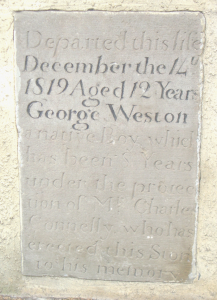 4 Responses to “Colonial settlement in the Georgian Era: Tasmania”