A portrait believed to be of David Cox (per Wikipedia).

The son of a humble blacksmith in one of Birmingham’s poorer districts, David Cox began his career as a painter, selling portrait miniatures and earning  a meagre living as a scene painter at Birmingham’s Theatre Royal, subsequently moving to London to work as a scenery painter at Astley’s Circus. At the age of 21 he decided to embark on a career as a  watercolour painter. He never made a great amount of money from his paintings but supplemented his income by giving drawing classes to the rich and famous, and by publishing a series of “how to paint” books. He also spent more than a dozen years teaching art at a girls’ school in Hereford.

Through the 1830s his watercolours reflected many of the dominant trends in British landscape and watercolour painting during the Romantic era. In particular he was famous for his moodily atmospheric paintings capturing the English weather in all its menacing qualities – lots of vistas with people scurrying to avoid the ominously dark clouds. 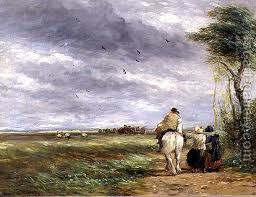 To his contemporaries his landscapes were as significant as those by Constable – but whereas Constable made his name in rural Suffolk, Cox specialized in scenes in North Wales (Betws-y-coed in particular) and Morecambe Bay.

He never even tried oil painting until he was fifty-six, but quickly mastered the  technique. In 1841 he returned to Birmingham.  According to one source “He by no means abandoned watercolour painting, and in these same years his watercolours gained a remarkable boldness, gravity and freedom of technique that set them apart from current fashion. In the last decades of his life he stood out as one of watercolours most original and distinctive practitioners”.

For a man who enjoyed such a good reputation at the time he seems to have disappeared off the graph, except in his native Birmingham. A shame – I find some of his paintings quite evocative. Here are a few I like: 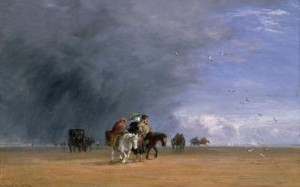 Westminster from London, painted in 1813. 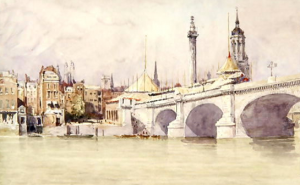 I like this one of the new (Rennie) London Bridge painted in 1831 not least because it shows a great gap where One London Bridge (my 4xgreat grandfather’s house) has just been demolished. I suspect the tenting arrangements were for the dignitaries attending the bridge-opening ceremony.

Many of his paintings are held at the Birmingham Museum and Art Gallery, including this one entitled ‘The 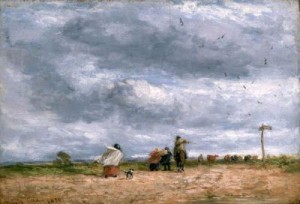 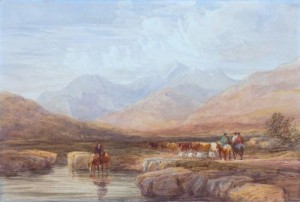 And finally, Snowdonia from Capel Curig:

Happy Birthday David Cox; you may not have been my favourite artist (well, you couldn’t be as you never painted portraits of beautiful women wearing large hats) but some of your paintings are very easy on the eye!