I recently came across the bill submitted to my ancestor Richard Hall by the Funeral Director on the occasion of the death of his first wife Eleanor in 1780. The undertakers (that is to say, the company which undertook the arrangements….) were John Cooper & Co. Here is the bill: 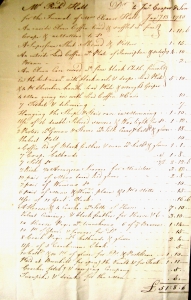 I have included it because it gives some idea of what was involved in a funeral in the Georgian Era in the latter part of the 18th Century. Eleanor Hall had died in her 47th year – she got up and had breakfast as normal on 11th January 1780 at her home at One London Bridge, had a splitting headache at midday, and was dead by six in the evening. In all probability she suffered a brain haemorrhage. It must have been a terrible shock for Richard, who had married Eleanor nearly 27 years earlier, and for their three grown-up children, who all lived at the property.

Richard records her death in his diary “Oh the affliction of this Day. My Dear and Affectionate Wife was suddenly seiz’d with a pain in her head after Twelve at Noon, which issued in a Fit; no Prescription of Physician Avail’d”

Richard was devastated and made this beautiful cut-out in paper as a memorial. The memento is only just over one inch across and is extraordinarily delicate.

He would have employed the firm of John Cooper & Co to make all the arrangements for the actual funeral, which was to take place at Bunhill Burial Grounds (where many Dissenters were buried). Richard and Eleanor were both Baptists and as an additional incentive to choose Bunhill, it was where both her parents had been buried back in 1754. The expenses even included opening up the family vault and constructing a tent over it so as to keep prying eyes at bay. 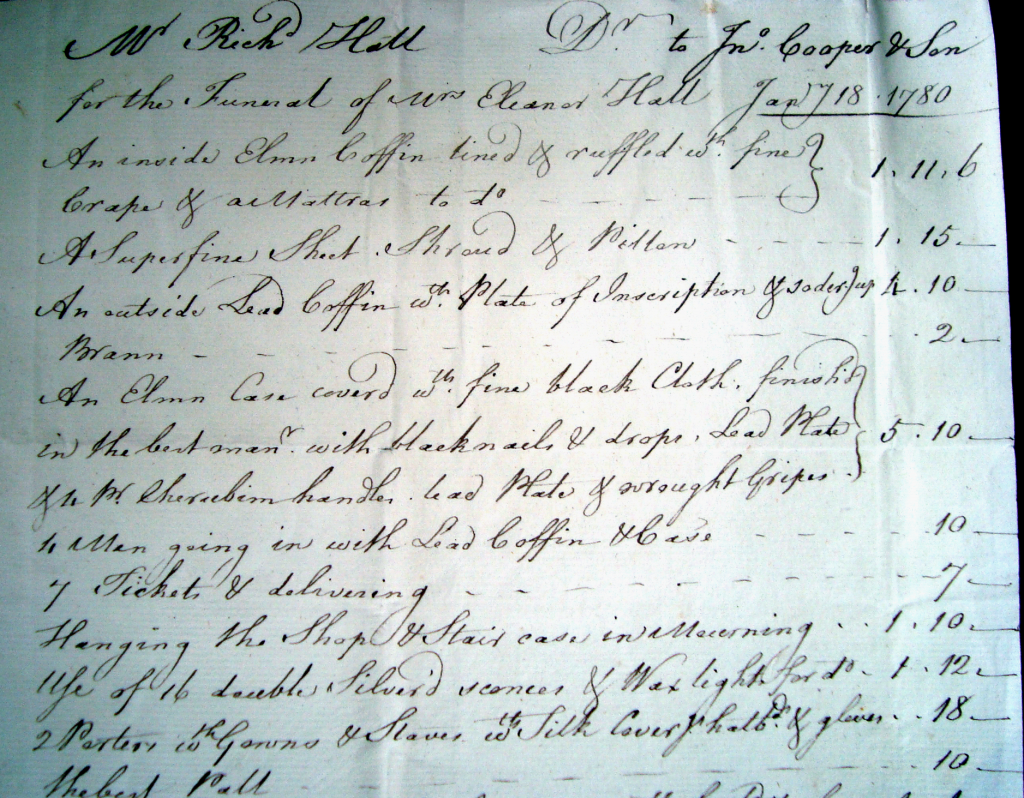 The invoice starts by showing the actual funeral as taking place on January 18th (exactly one week after Eleanor’s death) 233 years ago today.

To start with the actual coffin and furniture:

An Elm case covered with fine Black Cloth, finish’d in the best Manner with black nails and drape, Lead Plate Cherubim handles, lead plate and wrought Gripes (that is to say, grips) (£5/10/00).

Then there were the extras:

7 Tickets and Delivering   –  7 shillings.  (These would have been official invitations to attend the funeral service, sent out to close friends and often in the form of Memento Mori like this one, shown courtesy of the University of Missouri ). 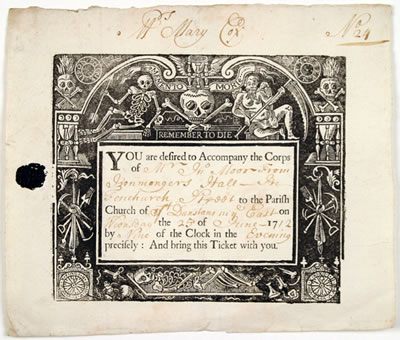 Hanging the Shop and Stair-case in Mourning (in other words, draping black cloth over the entire ground floor and stairs of One London Bridge, from where the funeral procession started its sad and solemn journey)

2 Porters with Gowns and Staves with Silk cover & hats & gloves 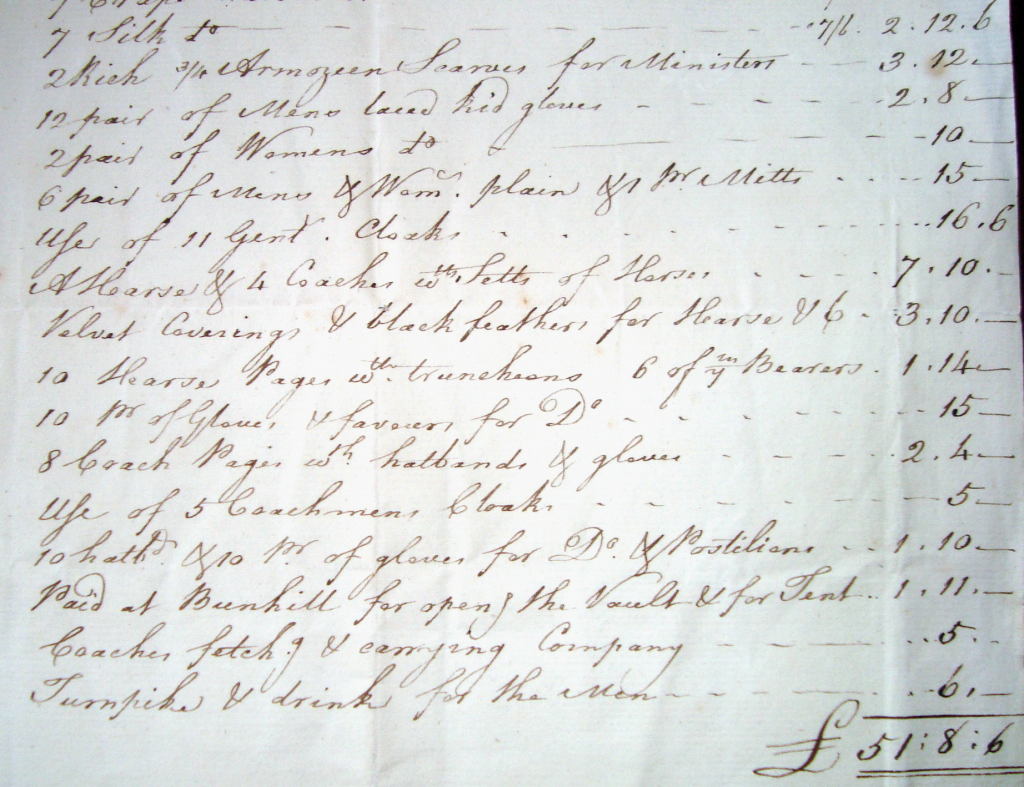 Use of 11 Gent Cloaks

A Hearse and 4 coaches with Setts of horses

Velvet Coverings and black feathers for hearse and six

10 Pairs of gloves and favours for ditto

10 pairs of gloves for ditto and Postillion

Paid at Bunhill for opening the Vault and for Tent

Turnpike and drink for the Men

It must have made a sombre and imposing sight as the funeral cortege wended its way north of the Hall household on its one mile journey to the graveside. As Richard noted in his diary that night, it had been “a very damp day, some part Foggy, not very Cold” You can almost see the black horses with their black plumes, attended by page boys dressed from tip to toe in black, the heavy coats of the pall bearers, the coffin lined with black velvet….