Death of an 18th Century Terrorist: John the Painter

Today I am delighted to offer a guest blog-spot to Geri Walton. By way of introduction: Geri has long been interested in history and is fascinated by the stories of people from the 1700 and 1800s. This led her to get a degree in History and resulted in her website,  which offers unique history stories from the 1700 and 1800s. Her first book, Marie Antoinette’s Confidante: The Rise and Fall of the Princesse de Lamballe, looks at the relationship between Marie Antoinette and the Princesse de Lamballe.

Today she has chosen to introduce us to a man of many names, someone who attained notoriety in the 1770s: 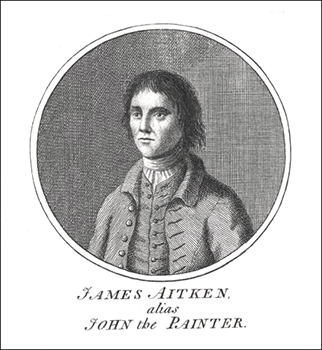 When the American Revolution broke out, there were some colourful people who decided to join with the Americans in their fight for freedom. One of them was an eighteenth-century terrorist*, a Scotsman born James Aitken, who, while working as a journeyman for a painter in Titchfield, acquired the nickname of “John the Painter.” Otherwise Aitken was known by one of the following aliases: Jack the Painter, James Hind, James Hill, John Aitkin, or James Acksan.

Aitken was born in 1752 in Edinburgh and was one of twelve children born to a whitesmith named David Aitken. After his father’s death, Aitken was educated at charitable school and after graduating he decided to visit America. Because he could not afford passage, he became an indentured servant. That did not last long because soon after setting foot on Virginia soil he absconded, and later when life in America did not work out, he returned to Liverpool in May of 1775.

With no money, Aitken took up a life a crime. This included shoplifting, burglary, theft, robbery, and the rape of a shepherdess tending a flock of sheep. Eventually, however, he landed in London and stayed there for four months before leaving for Cambridge in March of 1776. From there he went to Basingstoke, and while in Basingstoke, a conversation occurred with some companions. According to Aitken, the conversation was about the American Revolution, the Royal Navy, and the Royal Dockyards. “It was with satisfaction I heard every one agree, that the safety, welfare, and even the existence of this nation depended on them.”

Afterwards, the conversation would not leave Aitken’s mind. The idea supposedly ruminated and became more and more enticing partly because while in America he claimed to have been “transported with party-zeal” for the American cause. In the end, Aitken reported that the idea of destroying the Royal Dockyards and crippling the Royal Navy proved irresistible:

“The more I considered it, the more plausible was the undertaking, and the more eager I found myself to become the instrument of it. I spent two days in the contemplation of this malicious design and promised myself immortal honour in the accomplishment of it. I beheld it in the light of a truely heroic enterprise, such as never would have been equalled to the end of time. I was persuaded it would entitle me to the first rank in America; and flattered myself with the ambition of becoming the admiration of the world!”

To help put his plan into action, Aitken traveled to Paris, France, where he met with Silas Deane. Deane was an American merchant, politician, and diplomat who served as the first foreign diplomat from the United States to France. At the time, Deane was in Paris attempting to recruit Frenchman to fight in the American Revolutionary War. When Deane heard Aitken’s plan to burn the Royal Docks, he was not enthusiastic. He did, however, give Aitken a small amount of money, and Aitken left excited and enthusiastic believing Americans backed him in his scheme. 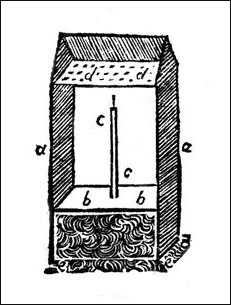 After his return to England, Aitken met with Edward Bancroft, who was an American spy and double-agent. Aitken also began plotting and planning and soon hired a tinman to make “a machine of his contrivance.” This contrivance was similar to a canister. Having worked as a painter, he also used his knowledge of chemicals and solvents to construct crude incendiary devices using the canisters. He then attempted to employ these devices making sure he was far away when they ignited. One newspaper reported on part of his process:

“[H]is mode of making matches was to fold paper double, and cut it into slips; and after grinding charcoal on a painter’s colourstone, quite fine, and breaking gunpowder with a knife, as painters do vermillion, to mix the two in clear water till it came to the consistency of new milk, and then to cover the matches with it: that when so prepared, they would last, according to their length, any given time after they were alight.”

Under the moonlight, Aitken put his plans into effect in Bristol and Portsmouth. The result was minimal damage. However, for a time, the British public was terrified and believed a band of terrorists were carousing throughout England. This was partially because fires that Aitken did not set were being attributed to him. Moreover, with the war in America, the British public became convinced terrorists might strike anywhere, anytime.
Public hysteria about the terrorists became so great that the King ordered the culprits be caught. Sir John Fielding, who helped form the first professional police force known as the Bow Street Runners, obtained a description of the culprit and that is when Aitken came under suspicion. A reward was then offered for Aitken’s capture, which occurred in Andover when he was taken into custody by a Mr. Lowe.

At trial, Aitken had no counsel and pleaded “not guilty,” but his “not guilty” plea was counteracted when witness after witness pointed their finger at him. Moreover, while incarcerated, he incriminated himself by speaking with a police spy. When the jury at last received the case, they found a great number of circumstances were corroborated by testimony or evidence. So, when it came time to determine his guilt or innocence, they asked each other’s o 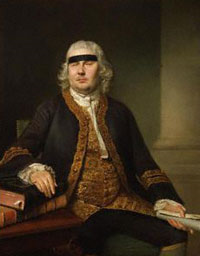 pinion and then “instantly pronounced the prisoner GUILTY.”

Aitken was hanged on Monday, 10 March 1777, near the Dock-Gates, on a gibbet nearly 65 feet high taken from the HMS Arethusa and placed at the dockyard’s entrance. It was the highest gallows ever constructed and it allowed a concourse of witnesses (some say as many as 20,000) to view his execution. After his execution and after his body hung for the usual amount of time, it was removed. His corpse was then affixed to another gibbet at the beach entrance of the harbour.

*Although the word terrorist was not necessarily in use at the time, the idea of terrorism had long existed. However, it would be the French Revolution and the period known as the “Reign of Terror” that would bring the idea of terror and terrorists to the forefront. Thus, sometime between 1789 and 1795, the French word ‘terroriste’ was used to describe those creating terror and the English would see a sharp rise in its English counterpart (terrorist) beginning in 1799.

If you want to know more  about Geri’s book, ‘Marie Antoinette’s Confidante: The Rise and Fall of the Princesse de Lamballe’ : The Princess in question had a unique perspective of the life of Marie Antoinette and the lavishness and daily intrigue at Versailles. It is a is a ‘must-read’ for anyone interested in Marie Antoinette, the origins of the French Revolution, or life in the late 18th Century. It can be obtained through the publishers (Pen & Sword) and is available on Amazon

2 thoughts on “Death of an 18th Century Terrorist: John the Painter”