My ancestor Richard Hall loved to see shows, exhibitions and the like and was in his element when he visited 18 Cheyne Walk Chelsea:

Don Saltero’s, from an engraving in the British Museum. 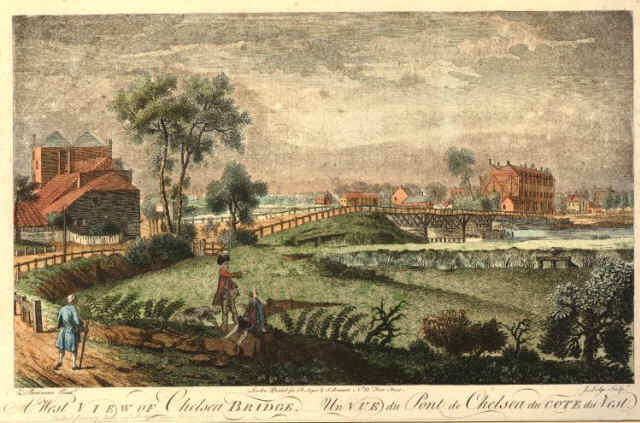 Chelsea Bridge from the West, c.1790 (courtesy of the British Museum).

The Salter Coffee House  in Cheyne Walk Chelsea was something quite unlike any of its rivals! James Salter – or  “Don Saltero” as he was generally nick-named, was quite a character and his coffee house was also a museum of curiosities.  He called it his “Knackatory.” Salter had started as a barber, later becoming valet to Sir Hans Sloane. In 1695 he set up a coffee shop by the river, and Sir Hans gave him a number of historical oddities to display. He attracted custom from naval officers who gave him other curiosities brought back from around the world and which Salter displayed in glass cabinets, or hung from the walls by the thousand. He decided that a more interesting persona would be as a Spanish naval captain, so ‘Don Saltero’ he became!

Visitors were not charged to see the “museum” but were expected to drink coffee or buy a catalogue for two pence. We know from the catalogues – and from the auction inventory when the contents were eventually sold in 1799, that Richard would have been able to see :

“a curious model of our Saviour’s sepulchre, a Roman bishop’s crosier, antique coins and medals, minerals, fossils, antique fire-arms, curious birds, fishes, and other productions of nature, and a large collection of various antiquities and curiosities, glass-cases, &c”

Relics included:- “King James’s coronation sword; King William’s coronation sword and shoes; Henry VIII.’s coat of mail, gloves, and spurs; Queen Elizabeth’s Prayer-book, stirrup, and strawberry dish; the Pope’s infallible candle; a set of beads, consecrated by Clement VII., made of the bones of St. Anthony of Padua; a piece of the royal oak; a petrified child, or the figure of death; a curious piece of metal, found in the ruins of Troy; a pair of Saxon stockings; William the Conqueror’s family sword; Oliver’s broad-sword; the King of Whiddaw’s staff; Bistreanier’s staff; a wooden shoe, put under the Speaker’s chair in James II’s time; the Emperor of Morocco’s tobacco pipe; a curious flea-trap; an Indian prince’s crown; a starved cat, found between the walls of Westminster Abbey when the east end was repaired; the jaws of a wild boar that was starved to death by his tusks growing inward”.

As if that wasn’t enough to satisfy Richard’s curiosity he was also able to view “a frog, fifteen inches long, found in the Isle of Dogs; the Staffordshire almanack, used when the Danes were in England; the lance of Captain TowHow-Sham, king of the Darien Indians, with which he killed six Spaniards, and took a tooth out of each head, and put in his lance as a trophy of his valour; a coffin of state for a friar’s bones; a cockatrice serpent; a large snake, seventeen feet long, taken in a pigeon-house in Sumatra—it had in its belly fifteen fowls and five pigeons; a dolphin with a flying-fish at his mouth; a gargulet, that Indians used to cool their water with; a whistling arrow, which the Indians use when they would treat of peace; a negro boy’s cap, made of a rat-skin; Mary Queen of Scots’ pin-cushion; a purse made of a spider from Antigua; manna from Canaan; a jaw of a skate, with 500 teeth; the mermaid fish; the wild man of the woods; the flying bull’s head…”

Richard must have been in his element at such a display – a veritable treasure trove of tat embellished with improbable claims, the walls festooned with exhibits. But to pay out thirteen shillings – that’s a lot of coffee! In today´s money that equates to slightly more than fifty pounds so it looks as though Richard bought half the shop. I wonder whether any of the hundreds of miscellaneous odds and ends left to me with Richard´s possessions include items from Don Saltero? Now I’m sure I saw an old sword marked “William ye Conq” somewhere around here….!

(A modified version of this post first appeared on my Posterous site in 2011).