I wonder: when my ancestor Richard Hall was entering in his diary for 1st April 1764 that there had been an eclipse of the sun, did he pause to consider what earth-shattering events might be happening around the globe at that time? If so, it is a fair assumption that he would never have envisaged that in a stables owned by the Duke of Cumberland a just-born chestnut stallion would go on to revolutionize the world of horse racing. It is incredible to think that the genetics of 95% of the world’s race horses can ALL trace ancestry back to that one horse. 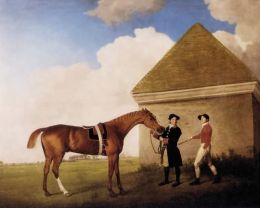 Needless to say, the horse was christened ‘Eclipse’ after the auspicious events of the day of his birth, and he went on to beat the very best of the best – and in such a manner that he was retired early from racing because there were no rivals worth betting on. The manner of his victories – and there were  18 wins from 18 starts – were so convincing that the competition just gave up.

By all accounts the foal was not much of a looker. He only ever grew to 15.2 hands, and exhibited a nasty disposition. He also had a curious style of running, with his nose close to the ground. The Duke didn’t want to keep the yearling, and sold it on to one William Wildman, a local meat salesman and follower of turf racing. Fortunately for the future of racing worldwide, Wildman decided not to geld the wayward creature (a customary measure to curb wild spirits) and instead ordered his jockey to work the horse more-or-less into the ground. Well, it certainly seemed to make him run hard, but the harder he ran the more frisky and hard to control he became. This was never going to be a horse which gave an easy ride to victory…

Up until 1786 there were a grueling series of heats, over four miles, all held on the day of the main race. Horses would therefore need to be able to race as much as twelve miles in a day and hence were not submitted to race until they were around five years old. And so it was that Eclipse went in for the first heat of a race on Epsom Downs, on 3rd May 1769.

The blaze-faced chestnut trounced the rest of the field in the heat, so impressing an Irish punter, serial womaniser and card-sharp by the name of Dennis O’Kelly that he proclaimed that he could name not just the winner but the place of all the runners in the main race. When challenged he replied ‘Eclipse first, the rest nowhere’ (In those days if a horse won by a margin of over 240 yards the field were described as ‘finishing nowhere’). So it proved to be – the rest of the field were left in his majestic wake.

O’Kelly watched the next appearance of Eclipse, at Ascot. It was another procession. He persuaded the owner (Wildman) to sell him a half interest in the horse for 650 guineas and indeed in 1770 bought out the remaining half share for 1100 guineas – O’Kelly got himself a horse which wiped the board, winning a dozen King’s plates. The handicap system of weighting just did not seem to work – the horse was carrying twelve stone and still beat every single one of the opposition by a margin of over 200 yards in every single race he competed in. This was not good for English racing – races were supposed to be competitive, not a mere procession. And so O’Kelly retired the horse as a seven year old after only three seasons, and boy must he have been glad that the stallion was still ‘intact’ and able to do the business in stud! At fifty guineas a time the horse made O’Kelly a fortune – small wonder since 344 of his issue went on to win races. The progeny proved to be ‘light-fleshed and easily trained’. Not only did his male heirs inherit the winning streak, but the mares which he produced turned out to be excellent breeding stock. Poor old Eclipse, he was to end his days totally ‘shagged out’ after being carted round the countryside from mare to mare in the country’s first ever horsebox. What an indignity – a fine horse reduced to being towed around by lesser animals!

Eclipse died aged 24 in 1789, a year after his owner. O’Kelly was a rogue who, thanks to money from Eclipse, attained a measure of respectability which he did not deserve. He suffered greatly from gout and was significantly overweight. The poor chap ended his days on a strict regime – not being allowed to drink more than a pint a day. Of wine that is.

It is inconceivable that Richard would not have known about the horse, for he was as familiar a name as Red Rum, Arkle and Desert Orchid to a more modern generation. The public clamoured for mementos, and unscrupulous parties were happy to oblige. 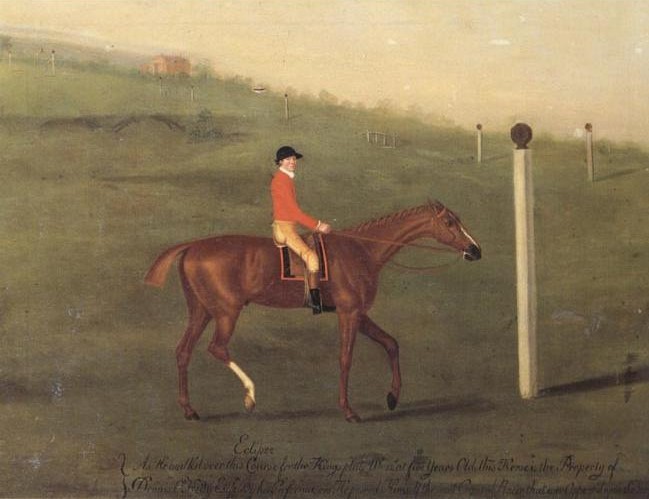 Judging by the number of ‘genuine hooves from Eclipse’ the horse had at least five legs. Indeed there are believed to have been six skeletons masquerading as the real thing. One of them is apparently to be found at the Royal Veterinary College in Cambridgeshire. His heart was weighed and  pronounced to be five pounds heavier than average, and ‘scientists’ scrabbled to write papers explaining his phenomenal speed.

Perhaps the expression ‘Eclipse first, the rest nowhere’ is sufficient to remember him by, for the phrase is still used to this day, both in the UK and America, to describe an overwhelmingly convincing victory. Many happy returns of the day, Eclipse!

4 thoughts on “Eclipse – born 1st April 1764 – perhaps the greatest racehorse of all time.”