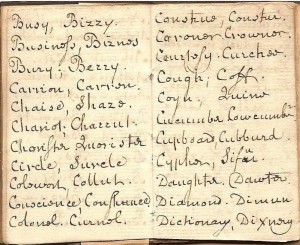 I have touched on this in The Journal of a Georgian Gentleman – clearly my ancestor Richard Hall would not have wanted to be thought of as a “country bumpkin” and would have been at pains to make sure he pronounced words correctly. Where the spelling differed from the pronunciation he jotted down the reminders: so, we get “shaze” for “chaise”, “dimun” for “diamond” and even “crownor” for “coroner”

I was also intrigued to see that “gold” was pronounced “gould”, Farthing” as “fardun” and “toilet” as “twaylet ” or even “twilight”. O.K., some of the examples are obvious (“yot” for “yacht”) but on the whole he does come across as a tad affected by modern standards! 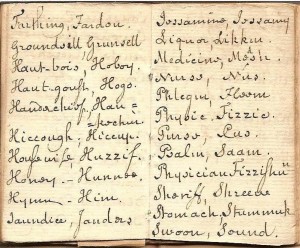 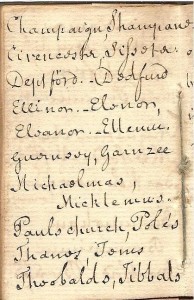 Place names and proper nouns were obviously not the same as now: I can just about remember people calling “Cirencester” by the name of “Sisester” and the Somerset village of Congresbury being pronounced “Coomsbury” but although we still talk of “Brummies” we don’t call the city “Brummagen” any more. Bartholomew is not, so far as I am aware, pronounced “Bartolomy”.  And even in Richard’s time “Brighthelmstone” was being abbreviated to match the way it was pronounced – “Brighton”. 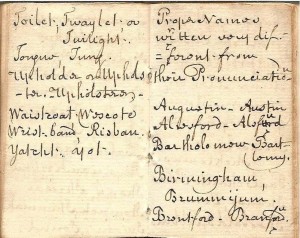 I suppose it boils down to the fact that pronunciation, like spelling, changes over the centuries. as well as from locality to locality. But it does make you think, if a well-educated man like Richard spoke of “hartichokes” rather than “artichokes”, and called his cucumbers “cowcumbers”. But then, think of the strained pronunciation of “Georgiana” in the film ‘The Duchess’ – it is almost as if the upper echelons of society deliberately strangled their vowels to make it impossible for the hoi-poloi to follow!

5 Responses to “18th Century Pronunciation – those difficult words where the spelling doesn’t match the spoken word.”