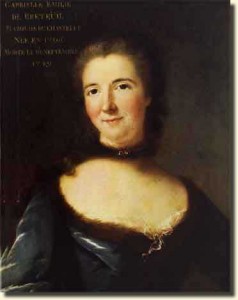 Today’s blog first appeared five years ago – long before I started writing “Petticoat Pioneers – the Story of Women in the 18th Century who succeeded in a Man’s World” * but in practice I never used her story because she was French and had no real connection with Georgian England. Nevertheless she is a most remarkable woman, so here is a repeat of the earlier blog:

Writing a post on Emilie du Châtelet (who was born in 1706,  and who died in 1749) is a real joy: here was a woman who not only believed in ‘carpe diem’ (seize the day) but seized the night as well! She certainly lived life to the full, and in doing also exhibited one of the sharpest brains of her century.

She was born into a wealthy family who lived near the Tuileries Gardens in Paris, in a house with 30 rooms and 17 servants. There was nothing remarkable about her siblings, but Emilie was special. Perhaps over-indulged by her father, most unusually she was coached in Latin, Greek, German and English as well as being taught fencing, riding and gymnastics. She was a good dancer, sang opera and could play the spinet. And she had a particular aptitude for mathematics and the sciences. As a youngster she would spend hours at her studies, often debating physics with the leading scientists of the age over the dinner table. Her incredible aptitude for figures enabled her to gamble at cards with considerable success (she could apparently add up a staggering number of permutations in her head). She then used her winnings to buy more books. Because, as a woman, she was unable to attend university she instead used family money to buy-in the best tutors, in particular the country’s most renowned mathematician Pierre de Maupertuis.

It was his custom to habituate Gradot’s coffee house in Paris, but women were banned from coffee houses. Emilie simply turned up at Gradot’s wearing a man’s suit. The proprietors pretended not to notice they were serving a woman — they didn’t want to lose their scholarly clientele. Emilie became a “regular” at Gradot’s and always arrived fashionably dressed — as a man. 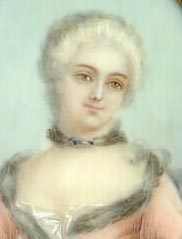 Small wonder that her mother appears to have objected to Emilie’s education – and even her own father remarked “My youngest flaunts her mind, and frightens away the suitors.” Not for long it didn’t…

At the age of 16 she was introduced to the Court at Versailles and became the immediate focus of male attention. The story goes that she was pursued by a man whose advances were unwelcome, so she challenged him to a duel – and won. When she was 19 she agreed to marry a soldier by the name of the Marquis du Chastellet, who had the advantage of being away frequently on military campaigns, or on garrison duty. He was stationed in Semur-en-Auxois in Burgundy; while she spent most of her time in Paris. She did her duty by him, bearing him three children, and then felt free to pursue her other interests of an amorous nature. She had at least two lovers before she started an eighteen month affair with the Duc de Richelieu (when she was 23 years old).

At 27, possibly at the occasion of the Duc de Richelieu’s marriage, she linked up with the writer Voltaire, who was over ten years her senior. It was Voltaire who changed her surname from ‘du Chastellet’ to ‘du Châtelet’ and it is by that name that she is now known. It was a mutual and instant attraction and they had a passionate affair which was to last fifteen years. Above all it was an incredible meeting of minds, with the pair of them sparking ideas off each other. Voltaire had just spent some time in England and was unpopular with the French authorities because of his pro-English stance. To begin with, they flaunted their affair, scandalizing society by attending the opera and being seen in public places, quite oblivious to the outrage being caused. Then a rumour was started that Voltaire was likely to be arrested because of his English sympathies and at Emilie’s suggestion he decided to keep a low profile by staying with the du Châtelet family at their country home at Cirey-sur-Blaise in North Eastern France. Apparently Monsieur du Châtelet was not unhappy with the arrangement, and it worked well for many years.

Voltaire was to write “I found in 1733 a young lady who felt more or less as I did, and who resolved to spend several years in the country to cultivate her mind, far from the tumult of the world. It was the Marquise du Châtelet, the woman who in all France had the greatest disposition for all the sciences. … Seldom has so fine a mind and so much taste been united with so much ardour for learning; but she also loved the world and all the amusements of her age and sex. Nevertheless she left all this to go and bury herself in a dilapidated house on the frontiers of Champagne and Lorraine, where the land was very fertile and very ugly. She beautified the house, to which she added pleasant gardens. I built a gallery, in which I created a very fine collection of scientific instruments. We had a large library.”

Large indeed – the library actually ran to some 21,000 volumes – a bigger collection than was boasted by many universities – and the laboratory which they established in one of the wings of Cirey was equipped with the finest scientific instruments money could buy, so that the establishment rivalled the Academy of Science in Paris. The two of them collaborated on a succession of experiments. Remember, this was a time when it was quite impossible for a woman to publish a scientific paper in her own name, so it was Voltaire who did the writing, while Emilie was the one who explained to him the underlying theories in physics. 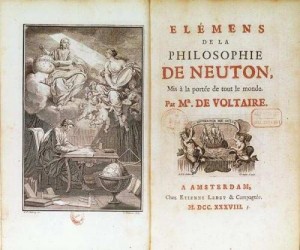 By 1736 Voltaire and du Châtelet were jointly working on the book, Eléments de la philosophie de Newton. The book was published in 1738 under Voltaire’s name, but in the preface he makes it clear that the book was a collaborative process with Emilie. The engraving shows Newton, sitting on High, with Emilie holding a mirror to reflect the truth of his Wisdom, so that Voltaire, the scribe, could render the wisdom into words.

Emilie was no mere assistant to the older Voltaire – she was by far the better physicist and mathematician. In time she embarked on her own translation of Newton´s Principia Mathematica. But it was no mere literal translation: where Newton was obscure she was clear; where Newton glossed over things she explained in detail; and where Newton omitted mathematical evidence to support his theories, she did the calculations and came up with the proof. Her detailed commentaries and explanations brought the masterpiece before a far wider (French) audience than was previously possible – and indeed her translation is still in use today. The book was published by Voltaire after Emilie’s death, but in her own name. 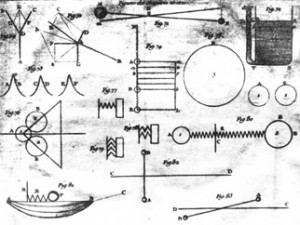 One of the contentious issues of the day was: what is energy? Conventional wisdom (and even Newton subscribed to this) was that energy was the force achieved by multiplying mass by velocity. In mathematical terms, e = mv. But du Châtelet was not happy with this: she was aware of the theories of the German mathematician and philosopher Gottfried Liebniz – but they were just that, theories. Emilie heard of the experiments by a Dutch researcher called William Gravesande, who dropped brass cylinders of a known weight into soft clay, and then measured the depth to which the object sank. On Newton’s principle, doubling the weight should double the depth – but it didn’t, it trebled. Emilie realized that energy was equal to an object’s mass times its velocity squared (E = mv2). 150 years later a young scientist, named Albert Einstein would use this discovery as one of the keys that would unlock his theory of relativity, E = mc2.

Some of the anecdotes about Emilie are lovely: she moved her bath into the parlour so that she could bathe while holding forth on weighty and learned matters, surrounded by men sitting around the bath while she wallowed in luxury. Drinks and canapes were served while the learned conversations ebbed and flowed around her! Even the male servants commented that it was her practice to appear naked in front of them when preparing for her ablutions. Here was a woman who was indeed comfortable in her own skin!

Age did not dampen her penchant for younger men. At the age of 40 she took a new lover, a man variously described as a poet and a soldier (or perhaps he was both). When she got pregnant she wrote to Voltaire (April 1749) confiding in him her fears at carrying a child at her age – fears which were to prove to be well founded. She wrote “I am pregnant and you can imagine … how much I fear for my health, even for my life … giving birth at the age of forty.” She added that she was sad at the idea of leaving before she was ready.

Apparently, throughout their fifteen years together Emilie and Voltaire had been regular letter writers – even on days when they were working together. Emilie had bound up Voltaire’s letters in eight red-bound volumes, but tantalisingly these have never been found.

In practice she survived the birth itself, but infection set in, and within a week she died. Voltaire was beside himself: “I have lost the half of myself—a soul for which mine was made.” Her young child, a girl, was to die eighteen months later.

Emilie was a remarkable woman, a scientist of towering intellect, a beacon of her times. She wrote treatises on the Meaning of Happiness and also a critical analysis of The Bible. She proved that women were the intellectual equals of men, and did so not by being a harpy but by being herself, a woman. But to my mind for her eulogy you cannot do better than quote her own words:

“Judge me for my own merits, or lack of them, but do not look upon me as a mere appendage to this great general or that great scholar, this star that shines at the court of France or that famed author. I am in my own right a whole person, responsible to myself alone for all that I am, all that I say, all that I do. It may be that there are metaphysicians and philosophers whose learning is greater than mine, although I have not met them. Yet, they are but frail humans, too, and have their faults; so, when I add the sum total of my graces, I confess I am inferior to no one.” 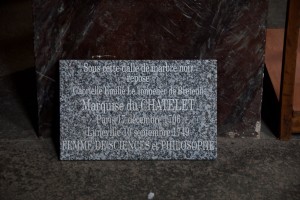 * “Petticoat Pioneers – the Story of Women in the 18th Century who succeeded in a Man’s World” is due to be published at the end of this year, by Pen & Sword Books.