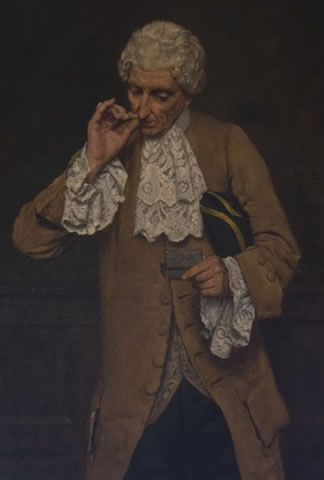 Having a few idle moments to research my recent post about taking snuff I was delighted to come across the wonderful site of Wilsons and Co (Sharrow) Ltd here.  You didn’t think they still make snuff? Think again! Think of seven generations of the same family grinding tobacco leaves from the same premises over a period of nearly three hundred years – and it is still owned by the Wilson family. Their site is a veritable treasure trove of information about early milling, and the history of snuff. With their permission I will include a few details from their site. It refers to Thomas Wilson whose “main interest was in snuff making; at some point he had come in to the possession of the secrets of this trade, and he was able to expand from this into his other ventures. In 1763 a fire at the Mills destroyed thousands of pounds-worth of his stock-in-trade which included ‘tobacco snuff’, and the business was considered so vital to tax revenues that a national collection was ordered to recompense Joseph and his partner (insurance was by no means universal in industry at that time)”. 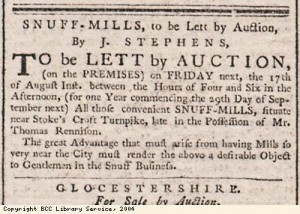 Their site also includes these images which are so “ageless” that you feel you can almost smell the snuff! 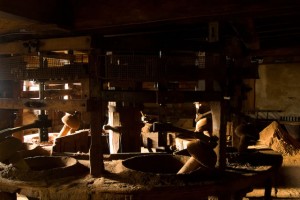 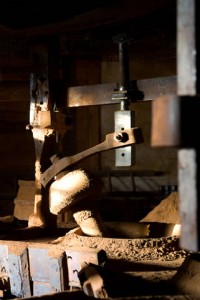 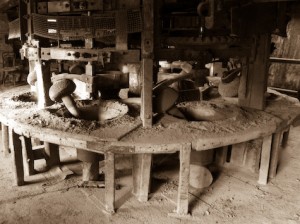 The full range of snuffs still being made is remarkable, but snuff-taking enthusiasts have always known exactly what they wanted. Some require it to be “toasted” and very dry, others want the tobacco leaves infused first in alcohol or added to aniseed or “rose of attar.”

There was a whole branch of etiquette devoted to snuff-taking, and as a gentleman you would want to be seen to be observing a strict code of conduct. Ceremony was everything! Books even appeared, to offer advice on how to sniff in polite company, as in this pamphlet published midway through the 18th Century:

I am not too sure about Rule 13 – shades of visits to modern China – but there you go!

Mention of Rose of Attar reminds me – that was one of the snuffs favoured by the Prince Regent. The records kept by Fribourg and Treyer suggest that he was inhaling  rather more than half an ounce of snuff a day. I pity the laundress having to launder all those snuff-stained hankies! Unfortunately, although Fribourg and Treyer had been trading continuously from the same shop in Haymarket for 250 years (“at the sign of the Rasp & Crown, 34 St. James’s Haymarket”) when Imperial Tobacco took over the firm thirty years ago they closed the shop, and sold on the right to make and sell “the Prince’s Mixture.” Such vandalism of our heritage is frankly inexcusable…

A really good description of the Fribourg & Theyer premises appears at the excellent  London Street Views site here and I recommend it to anyone wanting to know more about the firm, its products and its history.

The decline in snuff-taking was remarkable – what had been commonplace in 1820 was a rarity by 1850. But a fascinating book called “Ten Minutes advice in choosing Cigars,” published in London in 1833, gives a flavour of the  importance of Knowing Your Snuff if  you were to be considered a gentleman. Here are a few excerpts: 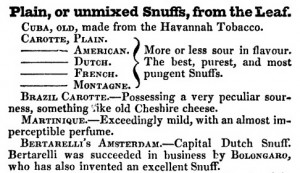 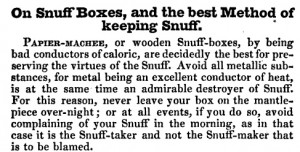 And to end with – something I hadn’t come across before, a snuff-box made of leather; (tin, wood, silver, gold and papier mache, but never leather). According to the Fisher London site here it is “a charming, 18th century snuff box of oval form, unusual to be crafted from baked leather.  The lid opens on an exquisite, integral hinge and is centred by an oval plaque (probably silver) finely engraved with the name of the original owner, ` Saml Robinson`.  A tactile piece remaining in excellent original condition. Circa 1770.” 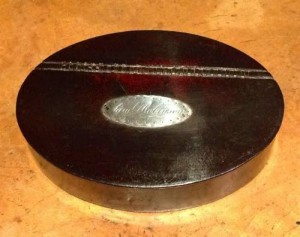 And that definitely is a case of enough snuff for now…