For all the tea in China…

I am delighted to have a guest blog today from the irrepressible Elizabeth Hopkinson, author of  a just-released novel Silver Hands which contains lots of detailed background information about trade with the Far East in the 17th and 18th Centuries. She has kindly agreed to  do this post on the activities of the East India Company:

Chinese wallpaper, courtsey of the V&A

High-class people in the 18th century were obsessed with East Asia. Go to any stately home of the period and you will find any amount of Chinese wallpaper and lacquered cabinets. European well-to-do’s sought to imitate their oriental cousins. They rode in sedan chairs (a sort of European version of the palanquin). They communicated with fans. Even the oh-so-English custom of taking tea, which derives from the period, is a poor imitation of the Chinese tea ceremony.Why the fascination? Because European fleets were making the journey to and from the Far East in order to furnish people with luxuries, and bringing back tales of exotic lands with them.

The big trading powers in the water at the time were the East India Companies: the English and the Dutch (known as the VOC, or Vereenigde Oost-Indische Compagnie). The two countries had already fought each other over the right to control the spice trade in the 17th century, and England had lost. The Netherlands controlled the main part of the spice trade from their base in Batavia (Jakarta). They were also the only Europeans allowed to trade directly with Japan after the Sakoku (closed country) Edict of 1635. They were restricted to the man-made island of Deshima, in Nagasaki harbour, and all other European traders had to go through them. (That’s why if you see any genuine Japanese lacquer-ware from before 1868 – as opposed to the inferior Chinese sort – in an English stately home, you can be sure it was very, very expensive!) England, however, had its company factories in India (where it exerted ever-increasing power), China, and a changing array of places in between.

To get there, the journey began in London. East India Dock didn’t open until 1806, so the ships loaded and unloaded in the City of London (between Tower Bridge and London Bridge). East India Company ships were big: between 500 and 1,400 tonnes, with a crew of 90, and with 30-48 guns. They looked like warships and were run like warships, with uniforms and strict discipline; and they travelled in fleets to protect each other. This was because there was a huge threat of piracy. Ships carried gold and silver bullion, along with all manner of expensive goods and a well-stocked medicine chest – a tempting target to any pirate. Still, they did take passengers, including brides being sent to ex-patriots in India, who must have been in for a pretty terrible journey. One army wife slept in a hammock above a cannon and bilge water, and humbler women could be berthed with the horses! The more well-to-do passenger could bring a variety of things with which to make themselves more comfortable: tables, chairs, writing desks, sofas, coffee-making equipment, soap, sweets, perfume, soda water and musical instruments. However, this wouldn’t help them much in the worst of conditions, and the most common causes of death among passengers were illness, suicide and falling overboard.

The prevailing winds bellied out away from the West Coast of Africa, coming into the haven of the Cape of Good Hope after about 6 months. (Since both the Dutch and English stopped to replenish there, this explains the origins of modern South Africa). They would then have to avoid being attacked by pirates from the island of Madagascar, and get to the Company factory in Madras. 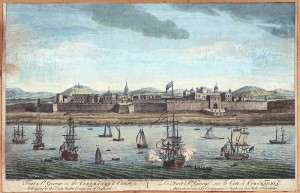 A typical “Madras landing” was a far from pleasant experience, involving pitching through turbulent waves in small boats. Once ashore, the white walls of the city awaited, along with Fort St George, St Mary’s church (est. 1680), and presumably the new (and Englishwoman-starved) husbands of any bride who had made it through the journey so far.

From there, the journey continued through the Straits of Malacca, where more pirates were waiting in the South China Sea. 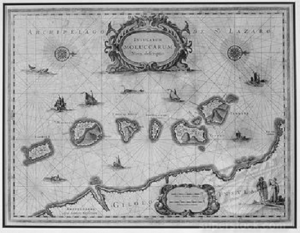 And if the ship made it through that, it would eventually reach China. The main company factory in China was originally Canton (est. 1699), followed later by Shanghai. (The nature of Canton as a trading port helps to explain why Cantonese is spoken so widely by Chinese people outside China, and why Shanghaiese and Cantonese are the biggest dialects after Mandarin in China itself). Canton in the 18th century had factories (trading stations) from Holland, England, Sweden, France, Denmark and the Holy Roman Empire. These stood in a row on the waterfront, each flying its own flag. (The English one apparently had gardens too, which were the envy of the others). Along the back of the factories ran “Hog Lane”: a haunt of thieves, prostitutes, and a drink made from alcohol, tobacco juice, sugar and arsenic! Factories housed around 12 officers, along with 8 clerks, 2 tea inspectors, 2 surgeons and a chaplain. They only opened during the season that the winds allowed the ships to visit: the rest of the year, the men went to live in Macao. 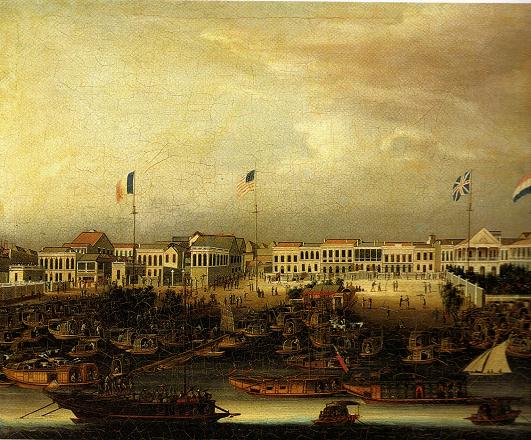 China wasn’t much more keen than Japan on allowing other nations within its borders, so all internal trade was handled by the Chinese, with external trade only taking place in the trading stations, and only with the licenced guild of Co-Hong merchants. The main commodity England wanted from China was tea, along with porcelain, ginger, lacquer-ware, ivory carving, wallpaper and raw silk. In return, the English could offer wool from home and cotton from India. (There was also a time from 1720-50 when silver was worth more than gold in China, so traders did a direct swap of bullion!) If there was room in the hold, a captain of the East India Company was allowed to conduct his own private trade as well as the Company’s, and so come home a richer man.

Finally, with the hold full of tea and other goodies, all the captain and crew had to think about was reversing the entire journey and getting back to London. How truly Gulliver said to the Houynhmns, “that this whole Globe of Earth must be at least three Times gone round, before one of our better Female Yahoos could get her Breakfast, or a Cup to put it in.”

I am most grateful to Elizabeth for her post: she is on Twitter as @hidden_grove and her new book is available on Amazon and Kindle. Silver Hands is a novel set in 1706-7, and reflects a huge amount of research into the English and Dutch East India Companies, international trade routes, and life at sea (including sea surgery). It also contains fascinating details about Japan’s secret feudal society  in that period. You can find details at Top Hat Books and her website is here.

2 thoughts on “For all the tea in China…”