New blogs have been conspicuous by their absence during the past two or three months – I have been finishing off two books for Pen & Sword, both of which are due out in 2020. One will be on the great Georgian inventors, artists, thinkers and industrialists whose achievements are so often overlooked – we concentrate on one or two big names and forget the army of other ‘greats’ who equally deserve their place in the lime-light.

The other book is part of the series on Sex and Sexuality through history – my contribution will be a book on the Georgian era. Good fun doing the research – and after my wife had finished reading the proofs she admitted that she had learned a lot!

The next six months or so will be quiet on the blogging front – numerous trips abroad (South America, India and Thailand, the Caribbean and Tahiti/Hawaii) will see to that. Some of these breaks involve lecture cruises with Celebrity, which I am greatly looking forward to. So, I will concentrate on preparing and polishing talks which are destination and itinerary relevant – always a challenge!

But ahead of the 200th anniversary of the death of George III I had been asked to write an article for the excellent magazine Jane Austen’s Regency World, about the king’s funeral at St George’s Chapel, Windsor. I must admit I had never given much thought to the role of the funeral director, but it turns out that there was one family of funeral undertakers who were closely connected with almost every one of the royal funerals in the 19th Century. That firm was Bantings, operating from premises at St James’s Street in London and they were appointed to their role by the Lord Chamberlain’s office. They carried out the funeral arrangements for George III, in 1820, his brother William IV in 1830, and the Duke of Gloucester four years later. In addition, they dealt with the funerals of both Queen Victoria and Prince Albert – as well as for many other members of the royal family. They also saw off the Duke of Wellington on his final journey and the company continued to hold the Royal Warrant until 1928 when William Westport Banning retired from the business. 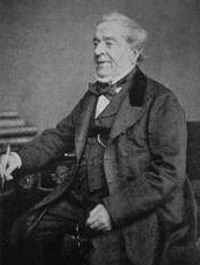 But the odd ‘factoid’ I enjoyed finding out was that back in 1796 William Banting had been born – growing up to become an excellent carpenter and funeral director, a good organizer – and a pioneer of a diet which we would now recognize as the Atkins Diet. In his thirties he started to put on weight and his corpulence led him to try exercise – but he found that this just led him to eat more and put on weight. As he himself remarked: ‘It is true I gained muscular vigour, but with it a prodigious appetite, which I was compelled to indulge, and consequently increased in weight, until my kind old friend advised me to forsake the exercise.’
He tried a starvation diet. He tried taking baths and drinking medicinal waters but to no avail. He experimented with sea air, and all manner of tinctures unguents and potions – even special shampoos. He could not stoop to tie his shoes, nor walk upstairs easily. His weight went up to 202 pounds – high for a man who was only five feet five inches tall and therefore with a BMI of over 33. He was going deaf, his eyesight was failing and he was becoming less and less mobile.

Enter the Ear, Nose and Throat specialist Dr William Harvey, freshly returned for a trip to Paris where he had met the Frenchman Claude Bernard. Barnard was promoting a low-carb, low sugar diet as being beneficial to good health, and Harvey saw Banting as an ideal test case. He persuaded Banting to give up all of his sugar- and starch-rich foods – things like bread butter, milk, sugar, beer and potatoes and to replace them with fruit and green vegetables. He was allowed meat and dry wine, and was encouraged to eat meals four times a day. It worked – Banting’s weight plummeted to 156 pounds within the year – a weight loss of three and a half stone. More to the point, his hearing and eyesight were restored. His girth reduced by over twelve inches and the poor blighter had to get new clothes made by his tailor or he would have been a laughing stock at all those royal funerals….

He lived until the ripe age of 81, a living testament to his dietary ideas. 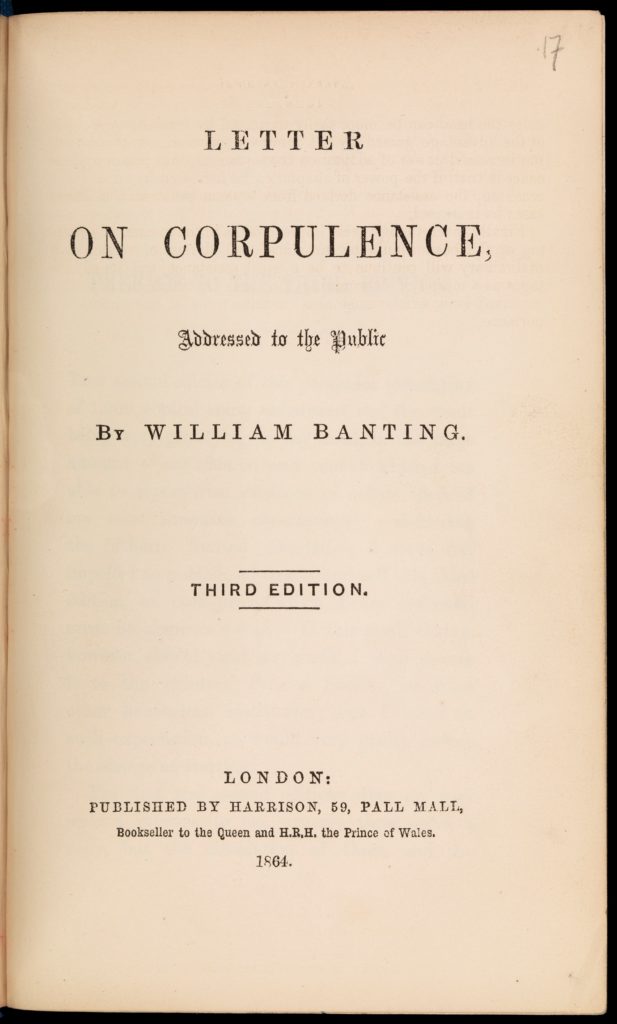 Shown courtesy of the Wellcome Collection

He didn’t keep the success to himself – he felt that his experience could improve the lives of the working poor, recognizing that their diet tended to be heavy on carbs, with starchy potatoes and bulky foods like bread, and drinks such as beer. So, Banting published his views in a pamphlet entitled ‘A Letter on Corpulence, Addressed to the Public’. It ran to numerous editions and in many ways led on to modern views on obesity, the link to diabetes and so on. But for the first half-century the Banting Diet was dismissed as nonsense by scientists and dietitians and it wasn’t until the 1920’s that Banting’s ideas were fully vindicated. Banting felt that the medical profession would never take him seriously, observing: ‘At one time I thought the Editor of the Lancet would kindly publish a letter from me on the subject, but further reflection led me to doubt whether so insignificant an individual would be noticed without some special introduction’.

It was in the 1960’s that cardiologist Robert C. Atkins put forward his ideas on restricting carbs while emphasizing protein and fats. Poor old Dr Atkins – he had a history of heart attacks, congestive heart failure and hypertension and died nine days after slipping on an icy pavement, hitting his head. He was 72 – and intriguingly weighed 258 pounds when he died, far, far more than Banting in his most obese period. I think you can say that Banting believed in practising what he preached – I am not quite so sure about Dr Atkins!

Whereas Dr Atkins no doubt made a fortune publicizing his diet, well, really, it’s little different from the diet proposed by Banting, and from which Banting made not one penny. 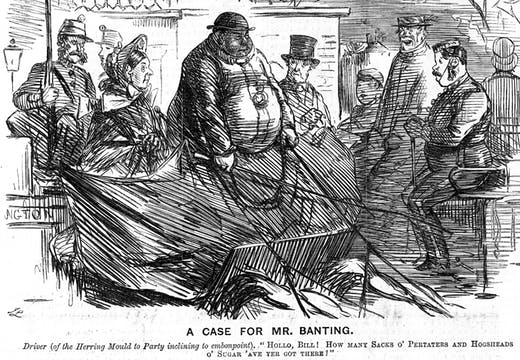 By the end of the nineteenth century the word ‘banting’ was synonymous with ‘dieting’  – as in ‘I need to go on a banting’. Here a cartoon from the Spectator Magazine

And if you want to see what Banting recommended – no exotic superfoods, no weird and wonderful ingredients brought in to the country from foreign climes, just this:

‘For breakfast, I take four or five ounces of beef, mutton, kidneys, broiled fish, bacon, or cold meat of any kind except pork; a large cup of tea (without milk or sugar), a little biscuit, or one ounce of dry toast.

For dinner, five or six ounces of any fish, except salmon, any meat except pork, any vegetable except potato, one ounce of dry toast, fruit, any kind of poultry of game, and two or three glasses of good claret, sherry or Madeira — Champagne, port and beer forbidden.

For tea, two or three ounces of fruit, a rusk or two, and a cup of tea without milk or sugar.

For supper, three or four ounces of meat or fish, similar to dinner, with a glass or two of claret.

For nightcap, if required, a tumbler of grog — (gin, whisky, or brandy, without sugar) — or a glass or two of claret or sherry.

It may be Aldi – but it is champagne…!

I must say I warm to anyone who recommends a diet with plenty of beef and chicken, washed down with good claret and brandy – but I think I will pass on the idea of kidneys for breakfast, if you don’t mind! And I am sorry, but a diet without champagne is a complete no-no…..