It is always interesting to see how people viewed fashions of the day – and contrasted them with fashions of a bygone age. This is a print from the Metropolitan Museum site. 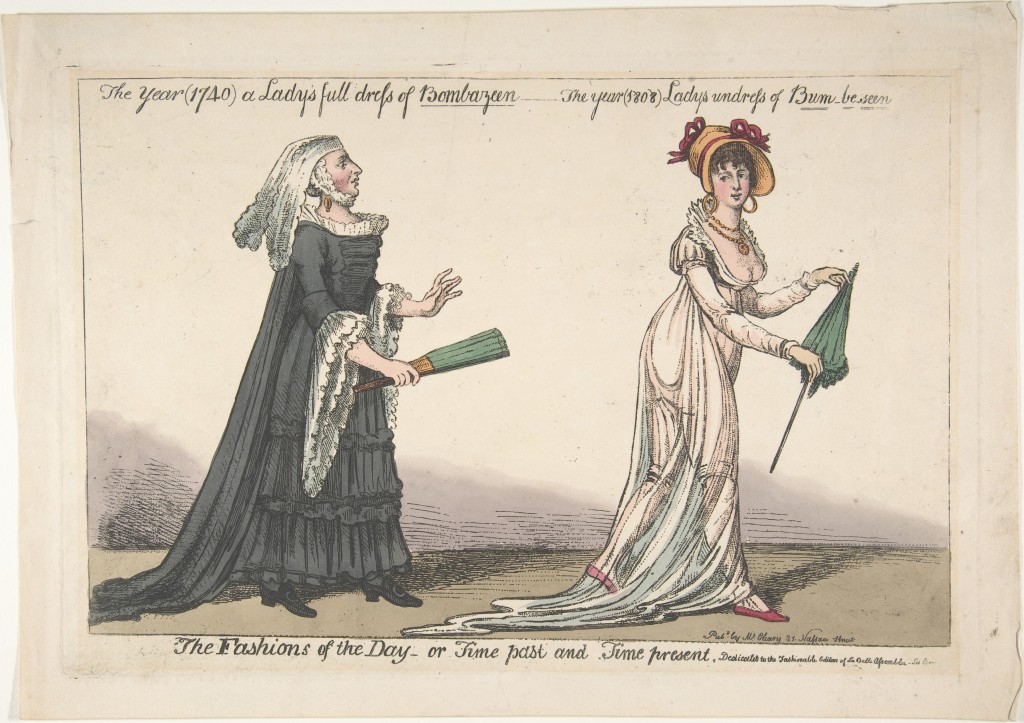 It is stated to be  ‘after the style of George M Woodward’ and appeared in 1808 and shows on the left a demurely dressed lady clad in black bombazeen – a sort of heavy corded material which most certainly did not reveal “what lay beneath.”  The  lady carries a closed fan and is described as showing the Lady’s Full Dress of Bombazeen for the year 1740.

The flimsily dressed floozy on the right wears a diaphanous number, through which her stocking tops are clearly visible. Her posterior is there for all the world to see, and across her front the dress does little to hide the charms of her embonpoint….  On her head she wears a fashionable poke bonnet, and she carries a parasol. She is representing the 1808 Lady’s Undress of bum-be-seen.

By way of amplification of the joke I came across this piece of doggerel in a book called ‘The flowers of literature, or, Encyclopædia of anecdote’ :

As Jack, above a drapers shop,

And tell what that may mean.”

For ‘tis so thin and drawn aside,

“That’s true dear Bet, it is no less”

And bum-be-seen’s the mourning dress

Not the finest sonnet I have ever encountered, but I thought it amplified the caricature rather nicely. I have no idea which came first…..