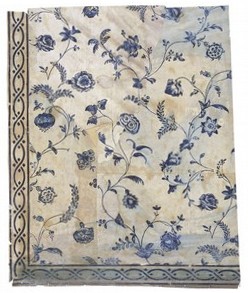 I remember working in a Georgian office in Bristol where the wallpaper was looking tired and in need of being replaced. It was only when the decorator came in and put his scraper through the wall covering to the rough stone behind it that it was realized that the paper had been hung on canvas sheets, stretched taut over a wooden frame, and that the walls had never actually been plastered! I suspect this may have been a common way of squaring off and smoothing irregular walls and rough surfaces. For what is certain is that applying paper to walls was a very common fashion in the Eighteenth Century.

“Jean-Michel Papillon, a French engraver and considered the inventor of wallpaper, started making block designs in matching, continuous patterns in 1675, and wallpaper as we know it today was on its way. The oldest existing example of flocked wallpaper comes from Worcester and was created in approximately 1680.

The manufacturing methods developed by the English are significant, and the products from 18th century London workshops became all the rage. At first, fashion conscious Londoners ordered expensive hand painted papers that imitated architectural details or materials like marble and stucco, but eventually wallpapers won favour on their own merits. Borders resembling a tasseled braid or a swag of fabric were often added, and flocked papers that looked like cut velvet were immensely popular.

Wallpaper came to America in 1739, when Plunket Fleeson began printing wallpaper in Philadelphia.

In 1778, Louis XVI issued a decree that required the length of a wallpaper roll be about 34 feet. Frenchman, Christophe-Philippe Oberkampf invented the first machine for printing wallpaper in 1785. Frenchman, Nicholas Louis Robert invented a way to make an endless roll of wallpaper around the same time.”

This gives us a background for the diary entry for September 1768 (made by Richard Hall’s brother-in-law William Snooke) relating to the Manor House at Bourton on the Water. 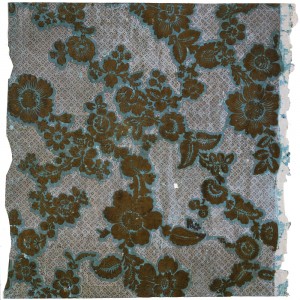 The paper was for hanging in ‘the Best Chamber’ and it is unclear whether the draping of the paper on the walls was connected with another item of expenditure for the same day (Saturday 1st September) “Paid for a box of tools One pound eleven shillings and sixpence”. Whatever it was, he needed more because in October he paid “half a crown more for tools” (i.e. another two shillings and sixpence). The total expenditure on flock paper, borders and tools therefore came to just under six pounds – not far short of four hundred pounds in modern terms. 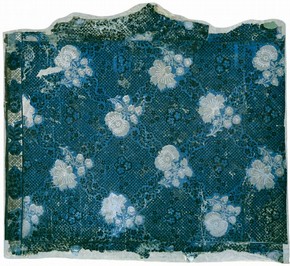 Flock paper, left, image courtesy of the Victoria & Albert Museum, which has a fascinating article on early flocks at http://www.vam.ac.uk/content/articles/f/flock-wallpapers/

Other expenditure that first week of September: “two shillings for half a hundred of crayfish, one and sixpence for a hare, four pence ha’penny for three quarters of a yard of black ribbon for my Wig, servants one shilling and mending the salt shovel sixpence.”

But there was enough in hand for the odd tipple – two gallons of Geneva (i.e. Gin) at nineteen shillings and One pound four shillings for an equivalent amount of “best coniac Brandy” meant a stockpile of four gallons of hard liquor to see out the winter ahead!

A typical still for making cognac in the 18th Century, picture courtesy of http://www.galenfrysinger.com