As a child I remember opening the curtains in the morning and marvelling at the frost pictures – whirls and fern-shapes spreading across the cold glass. Not something we get nowadays with central heating, but a reminder that our ancestors must have  taken extreme cold in their stride much better than we do – because they had no choice!

My favourite diary entry made by Richard Hall when writing about the cold was this one, when he remarks that it was so cold that it froze the water in the chamber pot: 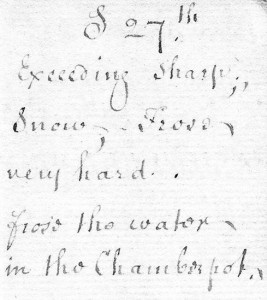 Even with bed curtains to keep out drafts, nothing, but nothing could have prepared you for the icy cold sheets of a Georgian bed – unless of course you were fortunate enough to have had your servant warm the bed first with a bed warming pan.

By way of illustration, two etchings by William Heath, both shown courtesy of the Lewis Walpole Library site and dating from around 1828.

The first is entitled “A nice place in cold weather” 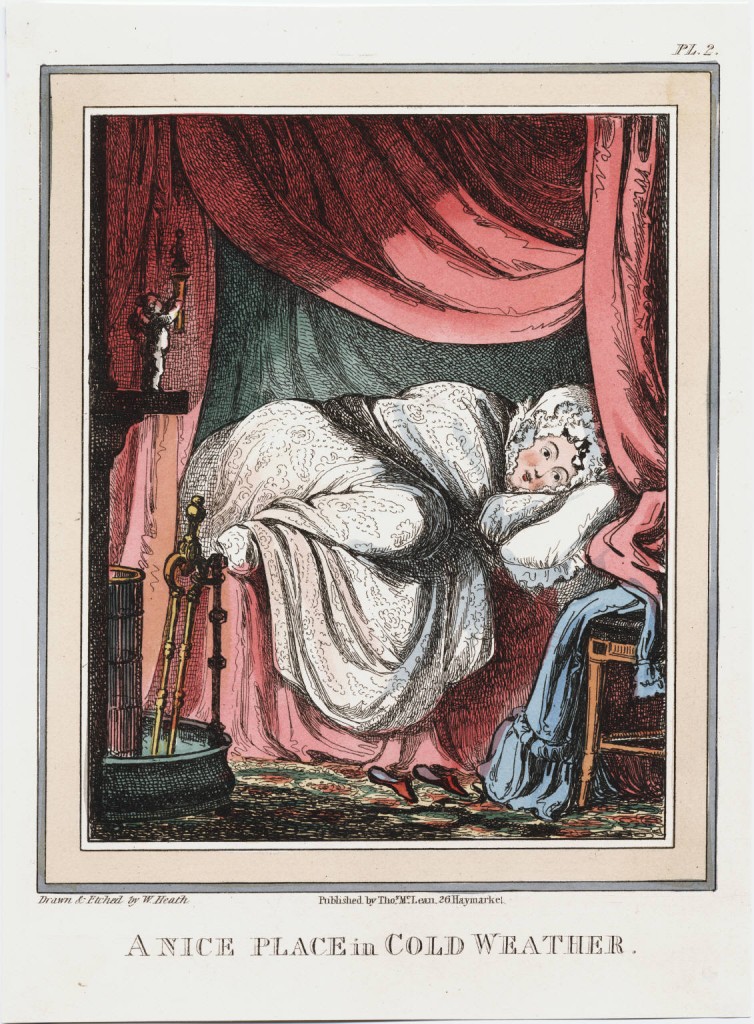 The second, part of the Man with umbrella series (see icon bottom left), is entitled “Do you please to have your bed warm’d Sir?” (presumably a reference to the bed warming pan she is carrying, but there again, maybe not!). 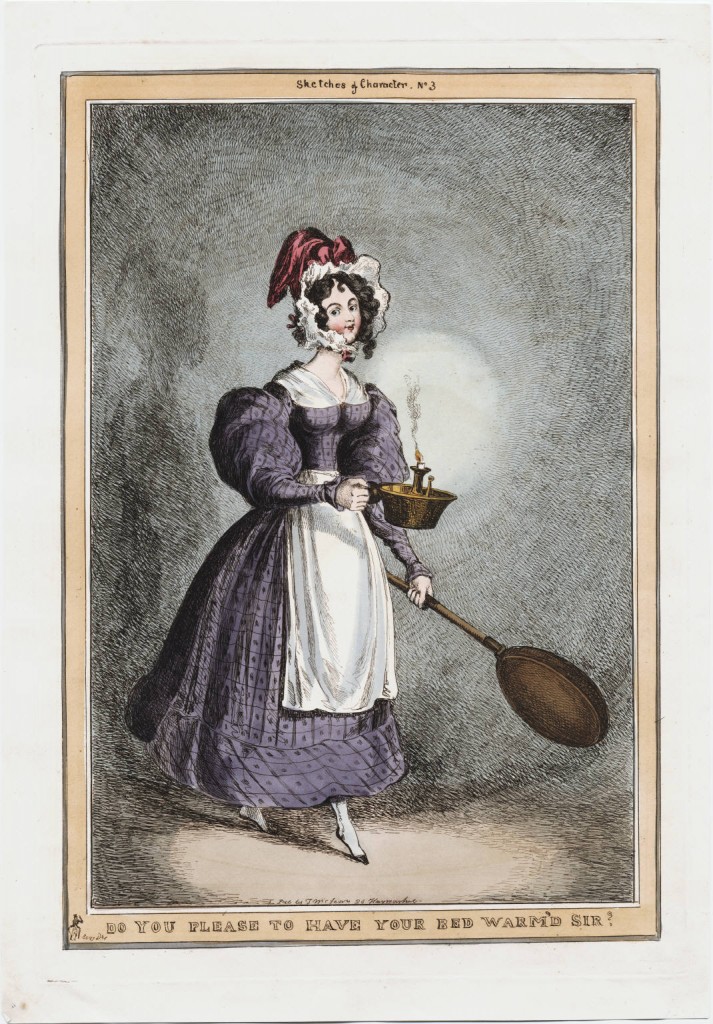 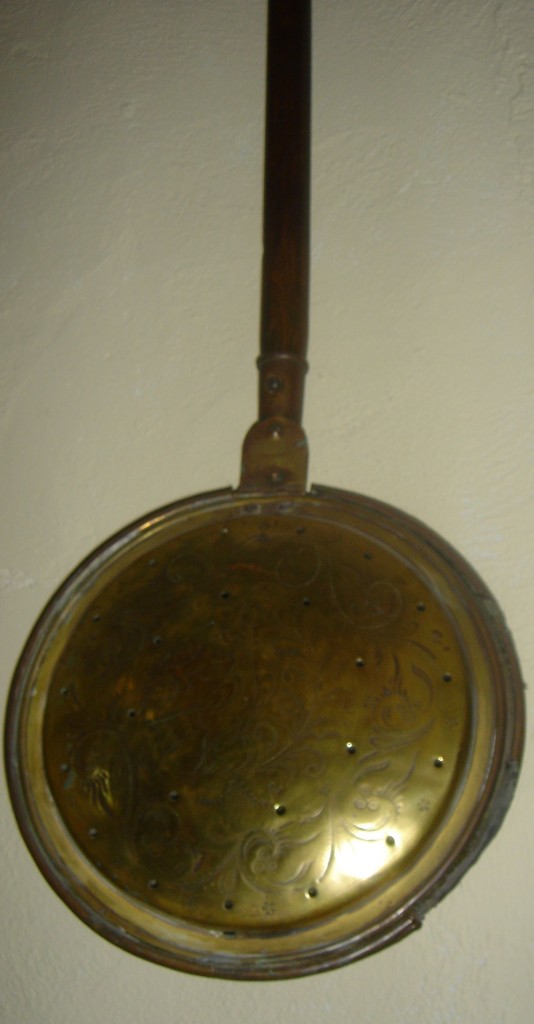 Warming pans started to gain popularity in the 1600’s. The early pans were somewhat heavy, with cast iron handles and deep pans able to hold whole coals. The hinged lids were often pierced to allow oxygen to reach the burning coal (necessary to stop the fire going out – the drawback being a risk of fire starting under the bedclothes, and the certainty of a fume-filled room when you retired to bed). Also it wasn’t just a case of the servant using the tongs to collect a coal from the grate, and putting it in the pan which would have been hanging by the fireplace, and then going up the stairs and planting it between the sheets – the pan needed to be moved regularly to stop the sheets getting scorched (hence the long handle for maneuvering the pan around the bed).By the late Georgian era the pans were less deep, because the fashion was to use embers or charcoal in the pans – or even hot sand – so oxygen was less of a problem in keeping the pan hot. The pans became lighter as the iron handles were replaced with wooden ones, some of them elaborately turned. In general though, the older pans had straight plain handles (the Victorian ones were nearly always  turned like banister rails).The pan itself was either copper or brass, both metals being good for conducting the heat.

Not everyone thought that a warm bed was a good idea. A somewhat cranky and cantankerous Scottish doctor  called James Makittrick Adair opened a practice in fashionable Bath and in 1786 published a handily-entitled series of essays under the heading of  “Those Especially who Resort to Bath : Containing Essays on Fashionable Diseases : Dangerous Effects of Hot and Crowded Rooms : Regimen of Diet, &c. an Enquiry Into the Use of Medicine During a Course of Mineral Waters : an Essay on Quacks, Quack Medicines, and Lady Doctors……”

What the good doctor had to say about quacks and lady doctors is for another time, but about hot rooms he had this to say:

“People in health ought never to have their beds warmed; not only because the fumes of the coals are in some degree noxious, but because warmth thus applied enervates the body. If, however, invalids and sick persons cannot from custom dispense with bed warming, one or two quarts of sand, made red hot in an iron pot, and put into the warming pan, will be void of all offensive smell.”

Clearly there was less of a risk of fire, or scorching, if a hot water bottle was used instead. Made of metal, the user would first have had to slip the bottle into a ‘jacket’ of cloth to prevent burning the skin. These became popular in the Victorian era, made of copper and, later, from china.

2 Responses to “Frost pictures, frozen potties and a bed warmer…. it must be winter!”