I never cease to be amazed at the huge losses run up by wealthy gamblers in the Georgian Era. Caricaturists had a field day, as in this drawing showing the Prince of Wales being urged on by Fox  to throw the dice one more time  “for ten thousand”. 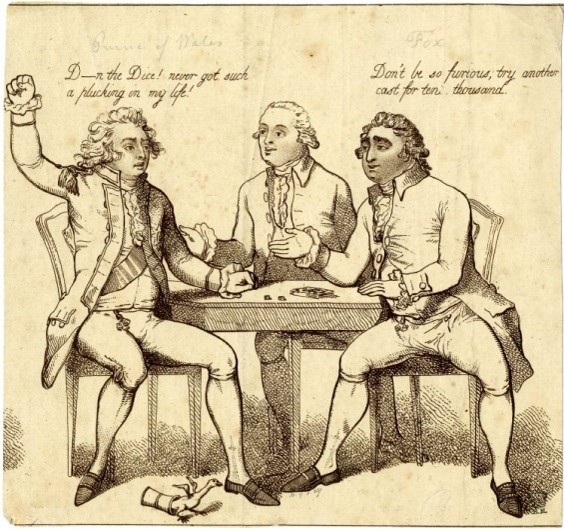 A famous gambler at cards was of course Georgiana, Duchess of Devonshire. Rowlandson shows her with her sister at the card table. When the duchess died aged 48 in 1806 she had debts equivalent nowadays to three and a quarter million pounds. (“Is that all?” was apparently the response of her husband, upon hearing the news). 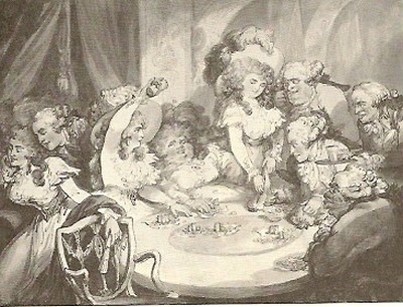 A variation of roulette – Odds and Evens – became popular  in the latter decades of the century, as shown in another Rowlandson drawing, called Private Amusements: 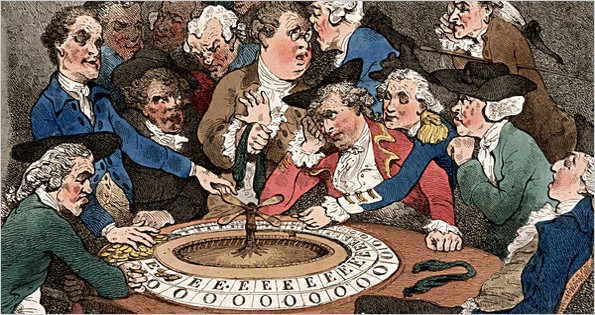 The extent of Eighteenth Century gambling was stunning – Sir John Bland, 6th Baronet, was born in 1722 and died at the age of 33 in Calais,unmarried. At the time when he inherited the baronetcy in 1743 the family estates included the entire city of Manchester and much of the surrounding countryside. By the time he died he had gambled away every single house, every single field, and he died intestate and penniless.

Another huge loss was reported in the Bath Chronicle of 29th March 1773:

Seventy thousand pounds at a single session! Multiply that by perhaps eighty and you get a loss of well over five and half million pounds in today’s money! Try telling an agricultural labourer, on a yearly wage of twenty pounds, that life was fair under the Hanoverians….

For some the losses were unsupportable – as in the curious case of John Damer, the son of Lord Milton. The writer Archenholz describes the man’s demise as follows:

“The conduct of the Hon Mr Damer, only son to Lord Milton was …extraordinary, and gave rise to a thousand melancholy reflections.Young, handsome, tenderly beloved by his father, nearly adored by the ladies, and with all the honours and dignified of the state within his reach he conceived a sudden disgust to life.
Having repaired to a bagnio he commanded twelve of the most handsome women of the town to be brought to him, and gave orders that they should be supplied with all manner of delicacies. Having afterwards bolted the door he made them undress one another and, when naked, requested them to amuse him with the most voluptuous attitudes. About an hour afterwards he dismissed them, loaded with presents, and then, drawing a pistol from his pocket immediately put an end to his existence.This happened in the year 1776″

Way to go! Others give different versions of the sad death – Boswell’s Johnson has him eating three buttered muffins, immediately before committing suicide and knowing that he wouldn’t be around to suffer the indigestion which would inevitably follow. Whatever – the Gentleman’s Magazine for that month gives the cause of death as “lunacy”.  I can believe the twelve naked ladies, but THREE buttered muffins! An unlikely story, about a man who had apparently never come across the word “excess” – I suppose the two stories may not have been mutually exclusive – maybe the muffins were consumed while the twelve naked ladies cavorted with each other. The mind boggles at the perversions of the Georgian Era…

The one thing which was certain is that John Damer could not face the financial burden of his gambling debts – nor the unhappy marriage which he had entered into with Anne Conway  seven years earlier. She, poor woman, was saddled with his debts, because her father-in-law insisted that she should accept personal responsibility for them. She did however go on to become a fine sculptress – the subject of another post another day.

4 Responses to “Gambling the night away – a noble pursuit.”