Another chance to gaze into my crystal ball, 1829: The March of Intellect.

Back in March 2014 I  did a post about a wonderful William Heath caricature entitled The March of Intellect. I think it is worth repeating:

What must the world have looked like to the inhabitants of this country when the effects of industrialization were beginning to bite? Seeing all around you the changes brought about by steam power – in industry, the mines and so on, where would you think it would all end? In 1829 railways were only just being developed (the Liverpool to Manchester  line would open the following year) and the land had not been criss-crossed with metal tracks, but stories abounded about experiments and coming changes. In transport, balloons looked set to transform the world and already char-volant carriages were scooting along roads propelled by high flying kites. Engineers were tunnelling and building bridges – what if these developments came together with Mighty Steam, and enabled us to travel vast distances, under the water, through the skies, over land?

And what might the social consequences be of mass transit, of the poor suddenly being able to enjoy the fruits of their labours? How would these changes affect our world? People fantasized about “what might be” long before Jules Verne came along, and one of the fascinating forecasts is to be seen in a caricature published in 1829 and drawn by William Heath under the pseudonym Paul Pry. 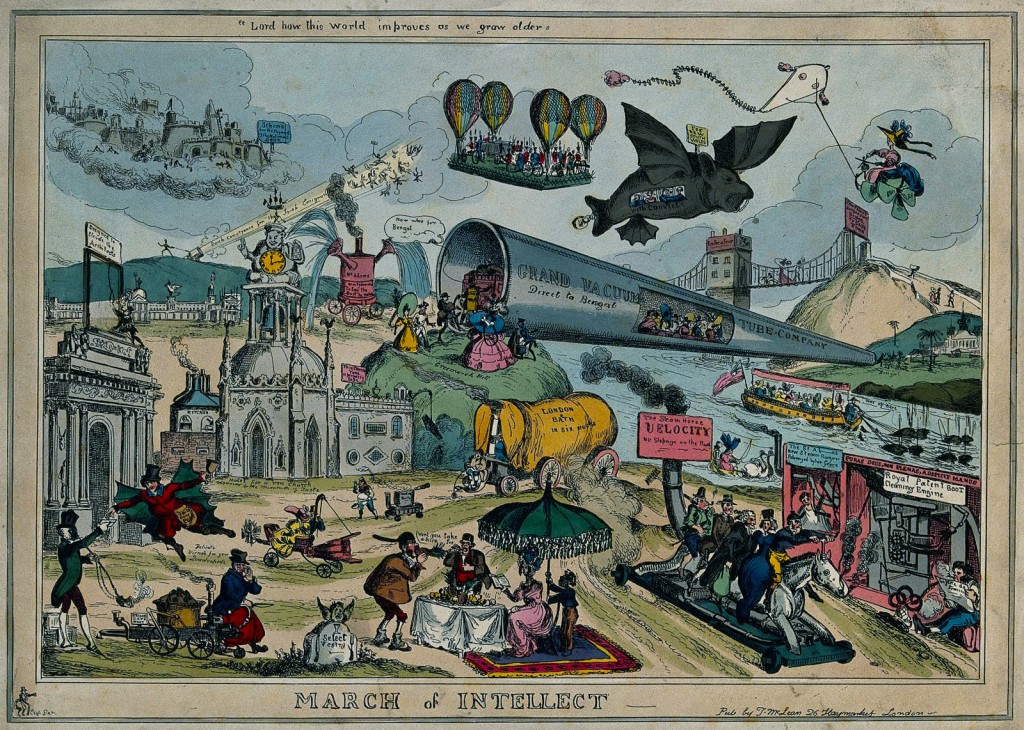 The original appears on the Museum of London site here and on the British Museum site here.

It is titled “The March of Intellect” and has the alternative title of “Lord how this world improves as we grow older.’ The main title is borrowed from a well-known phrase of the time, describing how the likes of Jeremy Bentham, Lord Brougham and others thought that educating the masses, and harnessing technology, would transform our world – for the better. Not all is as it seems…

The alternative title, which appears above the drawing, shows that the scene depicted is intended to be ironic. It comes from a poem by the playwright George Colman:

The Lady wrote just what Sir Thomas told her;

For, it is no less strange than true,

That Wives did, once, what Husbands bid them do;–

Lord! how this World improves, as we grow older!

Have a look at the picture and consider how the different ideas have been arrived at – I seem to find a new reference every time I look at it.

Dealing with some of the details:

1 The flying batman. This idea of the postman flying to collect a letter with the aid of his winged cape owes nothing to the comic book hero, but is a curious case of crystal-ball gazing. Rowland Hill’s penny post was to come in over ten years later – and how the winged device resembles the wing-suits sponsored by Red Bull in base-jumping displays!

2 The pineapple-eating dustbin-man A nice social commentary. In the Georgian era pineapples were luxury items, enjoyed by the wealthy. No clearer example of social change can be made than that a bin-man could afford to scoff such an exotic fruit, while his companion devours an ice cream!

3 The bellows-driven carriage for one. A contraption enabling the single occupant to be driven along, via a propeller activated by a giant pair of bellows at the rear of the machine, operated by a man in a hat pulling on a rope.

4 The vacuum train, apparently taking passengers from Greenwich Hill to Bengal.  A turbaned conductor shouts ‘Now who’s for Bengal?. Well, maybe Heath was being more prescient than we realize! In fact Brunel tried (and discarded) his ideas for an atmospheric train – where air is pumped out of the tunnels through which the trains were to run – on a section of the South Devon Railway line between Exeter and Plymouth. The year:1847. Fast-forward 170 years and scientists are currently looking at vac-trains capable of speeds of five times the speed of sound – reducing the travel time from New York to Beijing to just a couple of hours, and serious plans are afoot for a vac-train running on maglev lines to operate between Los Angeles and San Francisco. Who said London to Bengal was far-fetched! Just for the record, the Channel Tunnel is over thirty miles long, and the Delaware Aqueduct tunnel exceeds 85 miles in length.

5 The automatic water sprinkler to harden road surfaces. John Loudon Mcadam pioneered new methods for road building, specifying in exact detail the size and shape of the stones to be used. At that early stage it was not bound with tar – that didn’t come in until a century later – but others were seeking to improve on McAdam’s work with “water-based macadam” ie sprinkling water on to dust so that it settled between the sharp stones to give a smoother, more compacted, surface. The image shows a machine spouting water in all directions with the placard reading ‘Mc Adams Newly Invented to lay the Dust he makes’

6 The suspension bridge linking Bengal and Cape Town.OK we haven’t got there yet – but the Menai Bridge (1826) which linked Anglesey to the mainland of Wales appeared to open up limitless possibilities. In practice the Akashi Kaikyō Bridge is currently the longest suspension bridge at just under 2000 metres

7 The coffin on a crane, a graveyard on a church roof. With Burke and Hare terrorizing the families of the newly-dead with their corpse-stealing activities, what better place for a graveyard than on the roof of the church, heavily protected with iron spikes, so that coffins would be hauled up by cranes to outwit the grave robbers? There is a placard reading “This Church Yard is perfectly Safe”

8 The mechanical shoe-polisher. A man sits reading his paper while a steam-powered machine buffs and polishes his shoes. Now I could do with one of those…Above, a machine with a giant razor offers a close shave – for some reason dedicated to the Duchess of St Albans with the words ‘The St Al—ns New Steam Razor Patronized by her Grace’

9 A solution to the Irish problem. Fire them into space! “A quick conveyance for the Irish Emigrants”

10 A kite plane. A lady in a twin-propelled machine flies elegantly over the countryside, powered by a kite. Not as daft as it sounds – people have flown the Channel on kites, crossed it in boats pulled by kites – and the modern micro-lite has more than a passing resemblance to a kite.

11 A horseless carriage linking Bath and London in only six hours! A huge wagon with a steam pipe trundles along. Preposterous, of course there will never be such a thing… 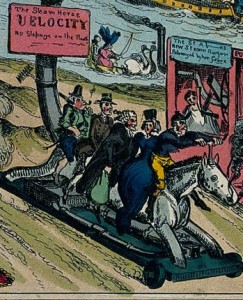 12 An iron horse carrying passengers Well what else is a train? Here we have a driver (dressed as a jockey) with a central pole – presumably for steering – stuck into the head of the beast. Behind, the passengers consist of a bewigged lawyer, a lady in a riding habit, a well-dressed man and a pipe-smoking Irish labourer. How egalitarian! The slogan reads ‘The Steam Horse VELOCITY No Stopage on the Road’. 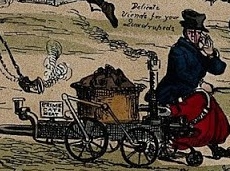 13 Re-fuelling. A lady with a steam trolley full of lumps of coal. She cries out ‘Delicate Viends [sic] for your Quadrupeds’; on it is a basket of coal with the sign ‘Prime Cats Meat’. 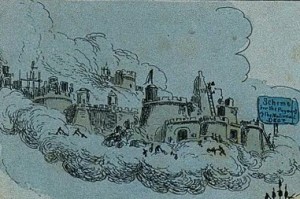 14 Getting rid of the National Debt. Why, build castles in the air, of course! 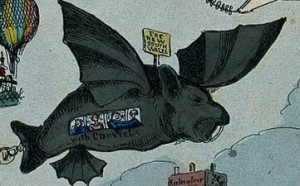 15 Travel by airship to New South Wales.  Here we have a whale-like monster with webbed wings and a poster reading ‘For New South Wales’; Passengers of both sexes are shown through a window, below which are the words ‘with Convicts’

16 The river boat pulled by dolphins. A bit fanciful! It was an ironic take on the overcrowded River Thames when steam boats started plying their trade on the river (1815) and offering passengers the luxury of eating on board, playing parlour games etc. The driver shouts ‘Come up there’

18 Soldiers on a flying platform. Apparently when Napoleon was threatening to invade England thirty years earlier there were scare-stories that his soldiers would fly across the Channel on a magic carpet, kept in the air by balloons. Ok, so we end up with hovercraft and B-52 bombers , but the end result is the same. Heath imagined flying soldiers: what we got was an air-force.

19 Ludicrous architecture. Marble Arch is topped by a gibbet, with the placard ‘Designed to Elevate the Architects’ while a man kneels to adjust the noose, busy smoking his pipe. Beyond is a fanciful concoction of spires and domes, with a huge mandarin figure holding up two fingers and a lantern, with a clock on his stomach. I presume this is a reference to the chinoiserie craze and the building of the Pavilion at Brighton. Meanwhile Buckingham Palace sports a giant bird and a giraffe on the roof. And why not, pray?

Where will it all end?

In total, Heath shows some lovely glimpses into how “Progress” was regarded – potentially for the good, but more likely to turn out for the bad. To quote Master Shakespeare in The Tempest, “O brave new world, that has such people in it!

Thanks to the British Museum and the Museum of London for the images and helping decipher some of the nuances in the images which Heath depicted. He died at the age of 46 in 1840, having specialised in satirical prints for the last twenty years of his life. There were two other prints under the same title of The March of Intellect, and together they offer a fascinating insight into how Progress (with a capital ‘P’) appeared to  people in the pre-Victorian era.

9 thoughts on “Another chance to gaze into my crystal ball, 1829: The March of Intellect.”