The Journal of a Georgian Gentleman

The historical value and interest of diaries is not so much in their accounts of great historical events but in their ability to convey the quality – the sights, smells and textures – of everyday life that would otherwise be lost to us.

It is everyday life that abounds in the diaries of Richard Hall, a sometimes pious Baptist silk hosier who kept shop at one end or other of the old London Bridge through much of the late eighteenth century. He recorded what he ate, what he purchased, how he slept and above all what the weather was like in near-obsessive detail. He charts the hurly-burly of family life – he had two marriages and numerous children – his sometimes tumultuous relationship with his church, and his boundless curiousity about almost everything – from astronomy to the latest fashions.

Richard lived between 1729 and 1801 and I am fortunate enough to have his diaries, his account books, his jottings and other bits and pieces. 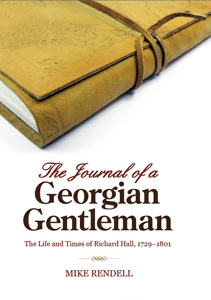 Rendell’s sympathetic editing of his ancestor’s words has created a volume which gives a real insight into ordinary life throughout the eighteenth century.

The Life and Times of Richard Hall 1729 – 1801 are expertly put together by Mike Rendell…..by seamlessly incorporating historical detail and additional sources, the author has written an entertaining account, not only of his ancestor’s life, but of the period as a whole.

I loved The Books’s illustrations and its elegant colouring and lettering. This fine presentation is an example of a book being as good as its cover. Open up and enjoy….It may prompt you to burrow into your own family archives and do the same…. Author Mike Rendell has done what many have dreamed of doing before him, he has traced his roots and made its history sing.

The text draws on Richard’s scrap and exercise books and commonplace clippings, as well as diaries. Of particular interest are the excerpts from Hall’s diary, in which he naturally records banal quotidian concerns such as weather and health but also random pearls such as his family’s various weights. Rendell does a fine job of pulling out the fine detailof his ancestor’s education,friends, business and marriage.

For euVue by: Seamus Doran.

Author Mike Rendell has done what many have dreamed of doing before him, he has traced his roots and made its history sing.