In my recent blog-post I gave examples of how my ancestor Richard Hall kept an aide memoire listing words which were pronounced differently from the way they might otherwise be expected to be pronounced – and one such word was ‘toilet’. My ancestor made sure that he remembered to call it ‘twaylet’ – or even ‘twilight’, in recognition of the word’s French origin. And of course it had nothing at all to do with going to the loo. Your toilet was an important part of the way you presented yourself to the world – how you dressed and powdered your wig, how you put on your make up, and so on. 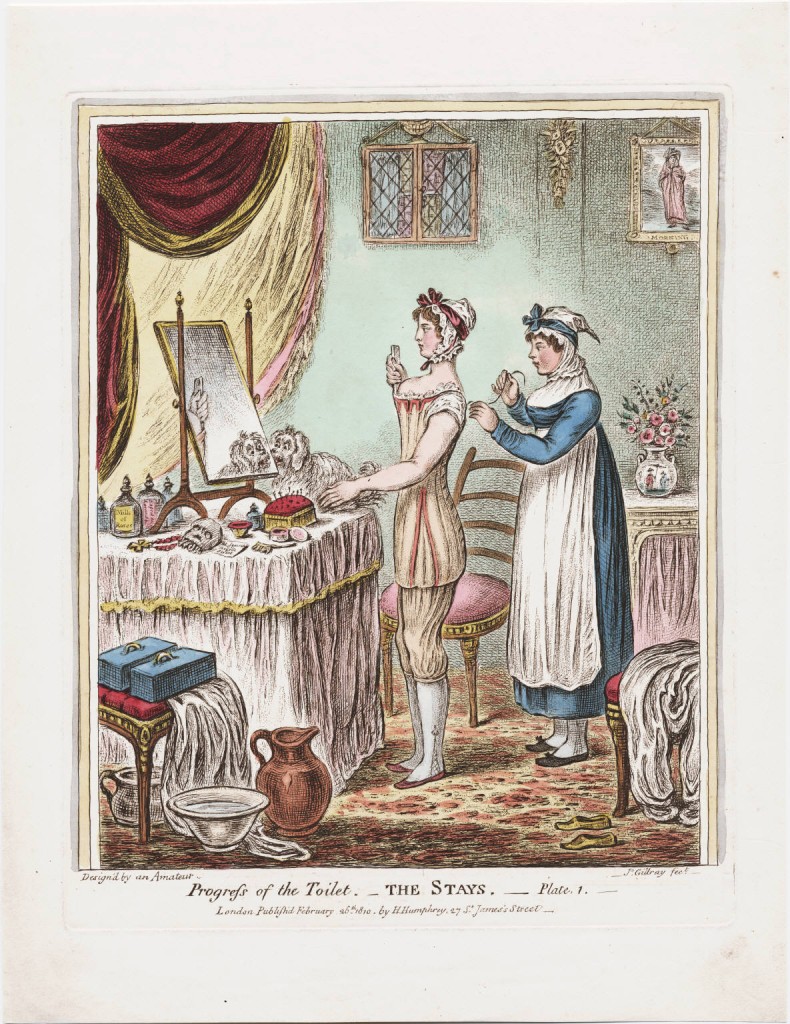 So I thought I would have a look at James Gillray’s print, published by his ‘other half’ Hannah Humphrey in 1810. It is called ‘Progress of the Toilet – The Stays’ and is interesting because of the detail it shows of a lady’s dressing room. Note the  heavy gold-edged red drapes in front of the window, lined with tassels. There is a patterned carpet, the walls are covered with eau de nil wall-paper  and a  small hanging book-case has curtained glass doors. There is a picture of a woman walking across a landscape, with a cloak draping her shoulders, inscribed ‘Morning’. The furniture is rich and delicate – a console table in the background supports a jug of roses; there is a matching trio of chairs, the one in the foreground supporting two blue boxes presumably containing toilet perquisites. The dressing table appears to be swathed in material – who says that it was the Victorians who first covered the legs of their tables? In the foreground Gillray shows a jug and ewer, essential to  a quick wash of the face before the make-up is applied, and the top of the dressing table has an interesting array of goodies, from perfume bottles marked ‘Milk of Roses’ and ‘Esprit de Lavande’ to a mask used at a masquerade, a rosary, and a pin-cushion. There is a ticket to a masquerade in Argyll Street, which was a fashionable area for professionals such as architects and prominent doctors, leading off Oxford Street. A lap dog admires its reflection in the swing mirror which sits atop the table.

The two people in the picture consist of the maid and her mistress, who is being helped into her pair of stays. M’lady is sporting a fine pair of white knickerbockers, and wears a pair of silk stockings embroidered with delicate ‘clocks’ which my hosier-ancestor would have been proud of. She is holding a wooden ‘ruler’ * down her front while the maid tightens the lacing up the back of the stays. Presumably the ruler was intended to make sure the lacing was tightened evenly, to give the best silhouette, while ensuring that a sufficient decolletage is left on display. After all, if you had it, why not flaunt it? Half a boob is reflected in the mirror…The stays themselves are long – level with the base of M’lady’s posterior. Both women wear boudoir caps.

The print appears courtesy of the Lewis Walpole site here and is one of a number of similar depictions of a maidservant lacing up a pair of stays. 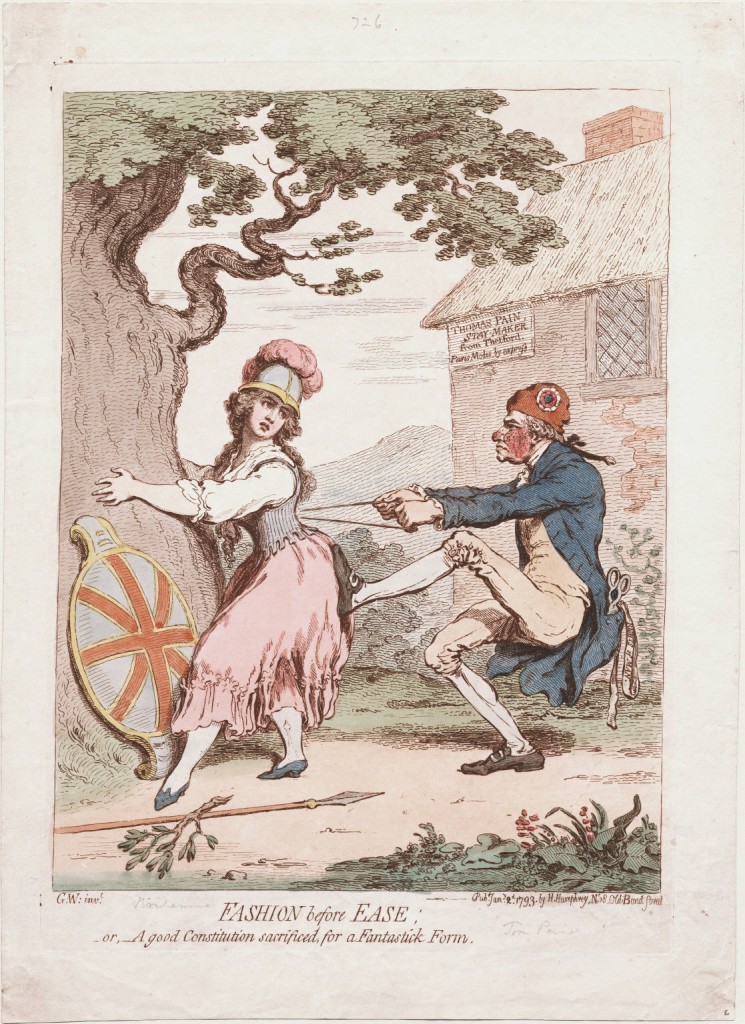 A rather more political comment was made by Gillray in 1793 with his ‘Fashion before ease – or – a good constitution sacrificed, for a fantastick form.’ It shows the political activist and reformer Thomas Paine (as in ‘Rights of Man’), red-faced and wearing a tri-colour cockade on his bonnet rouge. He sports the blue and buff favoured by the Whig supporters of Charles James Fox (they had adopted it because it was the colour of the uniforms in Washington’s army – a colour combination which therefore became associated with rebellion and constitutional change). The sign on the corner of the thatched cottage behind Paine reads: ‘Thomas Pain, Stay-maker from Thetford. Paris Modes, by express.’ The words ‘Rights of Man’ appear from a ribbon hanging from Paine’s back pocket, and he seems to be grimly determined to force Britannia into the shape (ie constitution) he is seeking to impose on her. Gillray is stating that Paine’s views are those of the French revolutionaries, and do not fit this side of the Channel. Indeed Britannia looks somewhat uncomfortable, as Paine puts his boot into it, as she braces herself against an oak tree. On the ground lies her spear and an olive branch, and her ornate shield rests against the side of the tree.

The print came out on 2 January 1793, less than three weeks before Louis XVI was dragged off to the guillotine, and only a month before France declared war on Great Britain and the Dutch Republic. As with the first set of stays, the print was published by Hannah Humphreys and likewise is on the Lewis Walpole site, shown here.

*My thanks to Isobel Carr for pointing out that the ‘ruler’ is in fact a busk, a normal part of all corsets. I learn something new every day…

(Post script: I will be taking a pause from blogging for the next three weeks as I am on a lecture tour on  the MS Braemar and I rather expect that I will have limited wi-fi access and therefore unable to deal with comments – or my own inevitable spelling mistakes – until I get back. See you 7th May!).

3 thoughts on “Gillray’s straight-laced view of a lady’s toilet.”