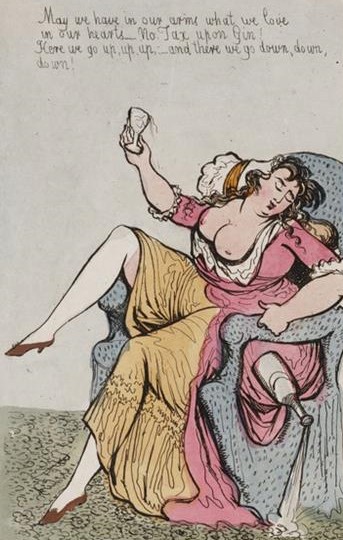 Detail from Newton’s Samples of Sweethearts and Wives, via Lewis Walpole Library

We all know about the eighteenth century gin craze: how men and women of ‘the lower orders’  got completely rat-arsed. As Hogarth put in his print of Gin Lane, you could get drunk for a penny, dead drunk for two pence. The low cost of distilled spirits meant that  the starving poor could escape from their miserable, grinding, poverty into a world of oblivion. Gin was the equivalent of the zombie-drugs taken by addicts, leaving them completely insensate. No-one pretended that it gave anyone a high – it simply numbed the brain. Small wonder, when the distilleries churning out the gin by the barrow-ful were not averse to cutting the spirits with  ingredients ‘to make it taste better’. Well, that is, if you like your gin with turpentine. Or even worse, flavoured with urine. Or perhaps a snifter diluted with sulphuric acid? You name it, the gin-shops mixed it. The resulting alcoholism was most evident in the London metropolis and extended  to men and women of all ages – but women in particular. Many of them had come to the capital as economic migrants, to seek their fortune, only to find that the living conditions were appalling, the job prospects distinctly limited, and the wages insufficient to cover basic living costs. Newspapers  were full of cautionary tales, but generally confused cause and effect. The poor were poor because they spent their money on gin, not the other way round. The poor were idle, the poor were being seduced by luxuries into thinking that they could have things without having to do an honest day’s work. 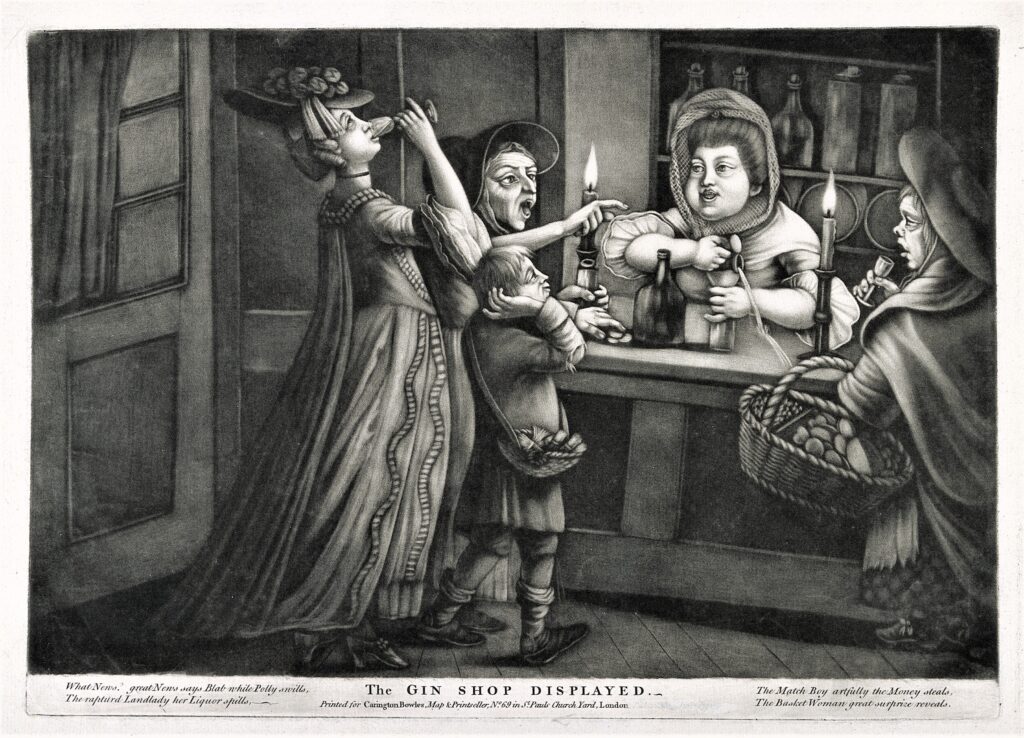 The Gin Shop, shown courtesy of the Wellcome Institute

One case more than any other shocked the nation: the trial and execution of Judith Defour. The trial took place in March 1734. Defour was a single mother, aged about thirty, and was charged with strangling her own child, a two year-old toddler. Judith’s background was that she was born into a sober, hard-working family who worked in the weaving trade and as a young girl she had started to work as a silk winder. In the words of the Newgate Ordinary, in her mid-twenties “she fell into bad Company, and had a Bastard-Child, which died; and then she had another, the unfortunate Child lately murder’d by her.”

She lost her job (quite possibly because she had a child out of wedlock) and drifted in and out of the gin shops. On several occasions she dropped off her child, called Mary, at the local work-house. She did this in January 1734 but at the end of that month she returned to collect Mary, who by then had been clothed by the Parish. She was accompanied by her friend Sukey, who was described as ‘one of the most vilest of Creatures in or about the Town’. In order to get Mary released from the control of the parish she first had to forge a letter of release from the Church. Judith and Sukey then hit upon the idea that they could make a few bob if they sold the baby’s clothing. The Old Bailey Proceedings recounted that the court heard how Defour ‘took the Child into the Fields, and stripp’d it, and ty’d a Linen Handkerchief hard about its Neck to keep it from crying, and then laid it in a Ditch.’ They then presumably went off to flog the clothes so that they could go off boozing for the rest of the week.

Later, in court, Judith admitted that she throttled the child in order to sell ‘the Coat and Stay for a Shilling, and the Petticoat and Stockings for a Groat.’ Worse, she was motivated to do this so that she could afford to go out and purchase  ‘a Quartern of Gin’ with her mate Sukey, who was with her at the time and was egging her on. 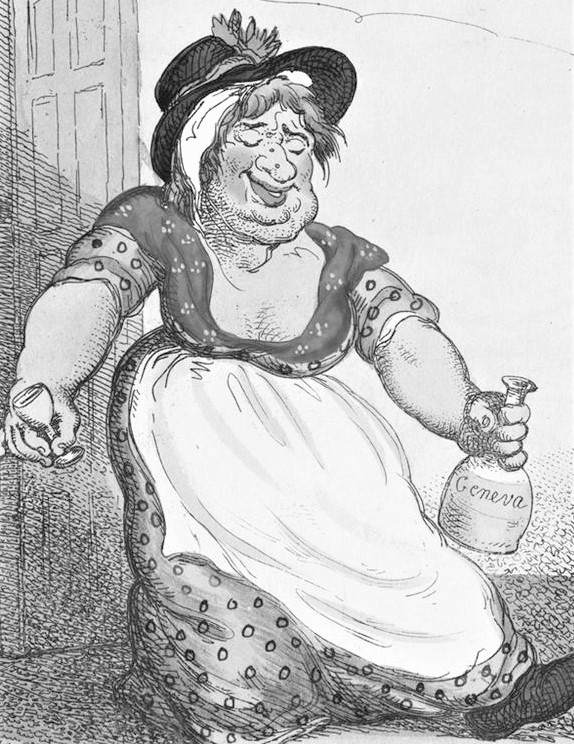 She was caught and sent for trial within a matter of days. The jury found her guilty of murder; her punishment was death. Sentence was carried out immediately despite the fact that she ‘pleaded her belly’ i.e. claimed that she was pregnant at the time. The execution was duly carried out at Tyburn on 8th March 1734, after which her body was anatomised – in other words, handed over to the medical profession for dissection.

At her trial Judith Defour confessed her crimes and according to the records contained in the Ordinary of Newgate she said that ‘she was very sorry for what was done, that she never was at Peace since it happened, that she scarce desired to live; and therefore she made a voluntary Confession she had been always of a very surly Disposition, and untractable Creature, a Despiser of Religion, negligent in her Duty to God and Man, and would take no good Advice of her Friends, nor of any good or sober People. She drank and swore much, and was averse to Virtue and Sobriety, delighting in the vilest Companies, and ready to Practice the worst of Actions. She acknowledged the Justice of her Sentence, and died in Peace with all Mankind’. 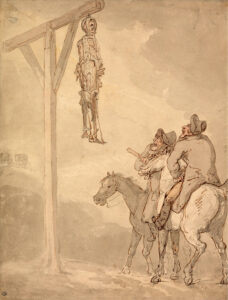 The Gibbet by Thomas Rowlandson, courtesy of the Yale Center for British Art

Hers was a truly shocking case and one which helped ensure that Parliament had no choice but to intervene  to try and curb the worst excesses of the gin trade. The Gin Act of 1736 was a failure. The Gin Act of 1743 was even more of a failure. It wasn’t until parliament passed a workable law that things got under control, with the 1751 Gin Act. By then you have to wonder how many other women committed  ‘the foul crime of murther’ in order to fund an uncontrollable drink habit…