The importance of the humble loaf of bread in Georgian diets is hard to imagine. Out of my ancestor’s household expenses in 1796 totalling just over one hundred pounds for the whole year, a quarter was paid to the butcher but the next main supplier was the baker, at roughly 20% of total outgoings. (Interestingly, vegetables were not bought at any time in the year – they were either home-grown or not consumed at all!).

Richard Hall’s diaries are therefore full of details about the price of bread – and he was horrified at the way grain prices rocketted in the final years of the century, as war with France caused rampant inflation.

As a younger man he would regularly cut out the newspaper notices of the approved prices for bread (they were regulated at the local Assizes). His early interest may have been because he had farming interests in the Cotswolds: naturally he wanted to know what price different cereal crops were fetching. In peacetime the main buyers of grain  were the millers, for producing flour.

Come wartime and the sale of beer increased, forcing barley prices up as the brewers competed with the millers. The millers wanted the grain harvested earlier than the brewers, so farmers needed to second-guess which way the market would go. And of course, farmers expected to be paid “on the nail” ( a reference to the “nails” in Bristol, circular-topped pedestals where samples of the grain were laid out for inspection in front of the Corn Exchange.).

I was intrigued to read  Edlin’s “A Treatise on the Art of Bread-Making”  published in London in 1805, where it gives all manner of different grains and produce which could be adapted for bread making – rice, acorns, even potatoes. I had no idea anyone would try and make bread from such things! And while we are on the subject of bread substitutes I feel it is appropriate to add in a Gillray cartoon, dated 1795 and entitled “Substitutes for Bread.” The list on the wall suggests that venison, roast beef and poultry are all acceptable alternatives – for the rich! The poor can just go without (in an echo of “let them eat cake”). 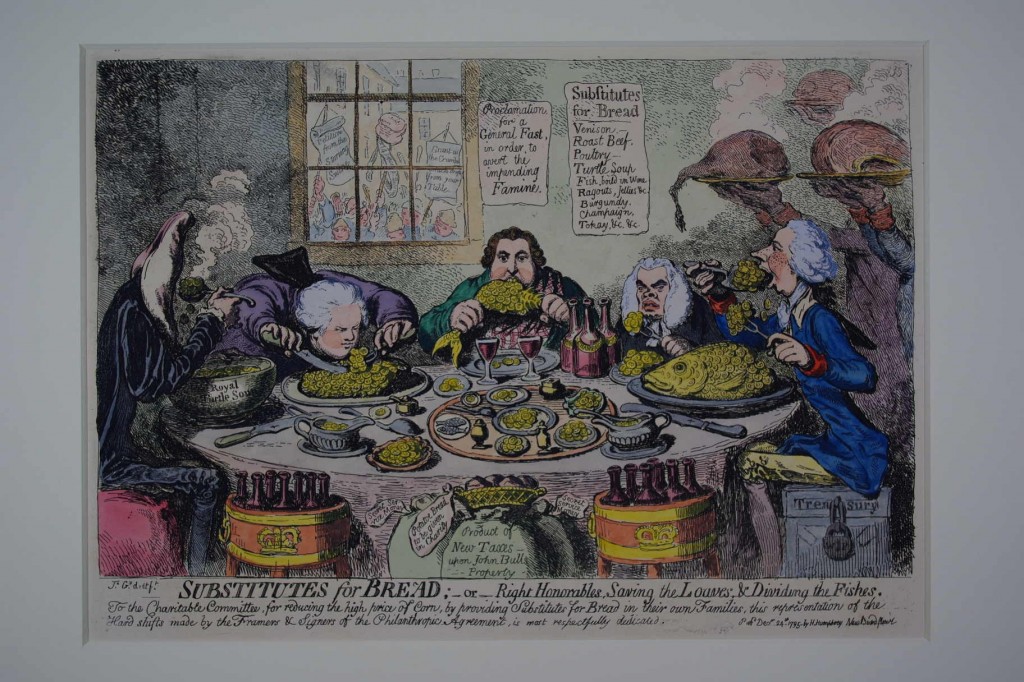 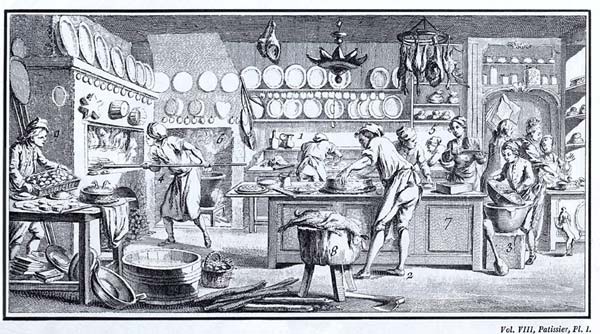 Diderot's picture of the inside of the bake house

Edlin’s  treatise explained about the actual bakery: “A bakehouse is a manufactory where bread is made for the purposes of sale. In order to render it convenient, it should be attached to the dwelling house, and have an inner door opening into the kitchen, and likewise an outer door to open into a small yard. In this yard there ought to be a well or pump, as also a shed for the piling of faggots. The room should be large and commodious, and the floor laid with stone or tiles. On one side should be erected a dresser or counter, with suitable shelves above it; on another side a kneading trough, about seven feet long, three feet high, two feet and a half broad at top, and sixteen inches at bottom, with a sluice board to pen the dough up at one end, and a lid to shut down like that of a box. On the third side a copper that will contain from three to four pails of water should be erected, which is far preferable to the filthy custom of heating the water in the oven; and on the fourth side the oven should be placed.” 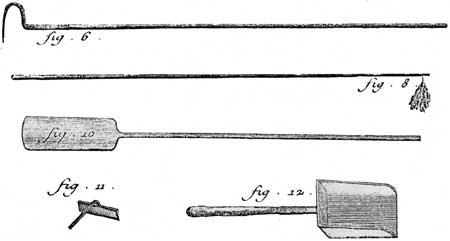 Diderot had earlier published his Encyclopédie with a section on the Boulanger  and this includes a picture of the tools of his trade.

In several of the houses I have owned there were still working bread ovens in the kitchen. It would have been the cook’s job to get the oven hot enough for baking, by burning twigs in the oven. On reaching the required temperature the remaining twigs and ashes were raked out, the dough inserted, and the iron door closed. Once baking was finished the twigs to be used the following day would be put into the oven as it cooled down, so that the twigs were bone dry and flammable for the next day’s baking.

And as for the recipe for making bread in the eighteenth century, look no further than Encyclopaedia Britannica, which in its 1771 edition informed the reader:

“The meal, ground and bolted, is put into a trough, and to every bushel are poured in about three pints of warm ale, with barm and salt to season it: this is kneaded well together with the hands through the brake; or for want thereof, with the feet, through a cloth; after which, having lain an hour to swell, it is moulded into manchets, which scorched in the middle, and pricked at the top, to give room to rise, are baked in the oven by a gentle fire.”  Mmm, I am not sure that I want my bread moulded into manchets if the baker has been kneading it with his feet!

These pictures show the actual bread sellers at work on the streets (in France, on the left; in Germany, on the right). 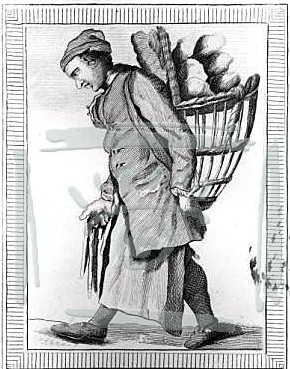 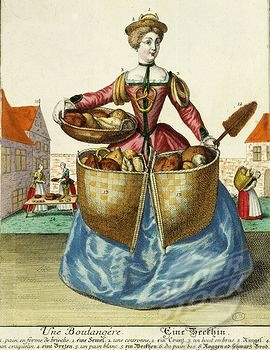 6 Responses to “Give us this day our daily bread…”