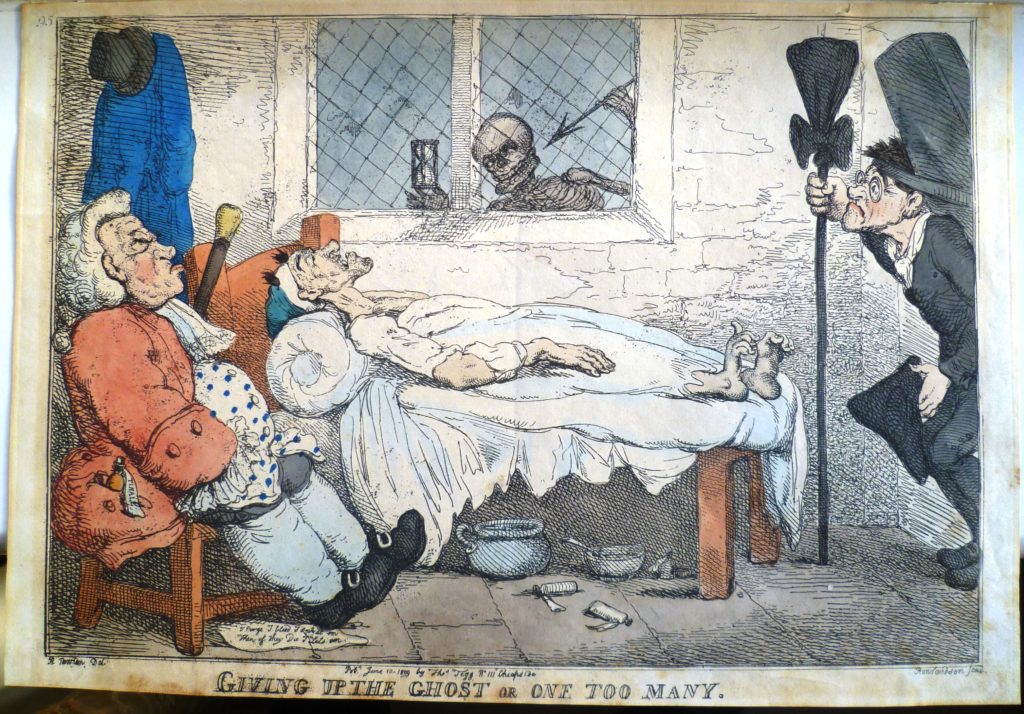 A while back I was fortunate enough to buy a Rowlandson print, entitled ‘Giving up the Ghost, or, one too many’. Needless to say my wife hates it and is not inclined to let me  display it on the living room walls. Which is a shame because in these gloomy times, when every single news item dwells on sickness, mortality rates and medics unable to cope, it is good to be cheered up with the thought that illness, death and  doctors have been around for rather a long time. Humour is wherever you choose to find it – in the depiction of death, lurking outside the window, arrow poised, or the chamber pot under the bed, or the doctor happily snoring away in a chair in the corner – or the soon-to-be deceased lying with his toes curled up.

The British Museum site describes the print as being ‘by Thomas Rowlandson, after Richard Newton,’ and dates it as being from 1813. It has this to say:

A dying man, wearing a tattered shirt, lies stretched on a miserable bed under a casement window, through which looks Death, a skeleton holding up an hour-glass and a javelin which he points menacingly at his victim. A fat doctor (left) sits asleep at the bedside (left) while an undertaker’s man, with a coffin on his back, and holding a crêpe-bound mute’s wand, enters from the right as if smelling out death. The doctor wears old-fashioned dress, with powdered wig, and has a huge gold-headed cane. Beside him are the words:
“I purge I bleed I sweat em
Then if they Die I Lets em”

I must admit I knew very little about the practice of having mutes at funerals, or that the sticks they carried were called wands, so I am grateful to the History Extra site for giving this helpful information:

The mute’s job was to stand vigil outside the door of the deceased, then accompany the coffin, wearing dark clothes, looking solemn and usually carrying a long stick (called a wand) covered in black crape.Charles Dickens’s best-known mute is Oliver Twist, employed by the undertaker Sowerberry for children’s funerals. Most, though, were adult males, and were common in several European countries from the 17th century onwards, as ceremonial ‘protectors’ of the deceased. The fashion was probably inspired by the ancient Roman practice of assigning lictors (bodyguards of civic officials) to escort the funerals of prominent citizens.

There are plenty of accounts of mutes in Britain by the 1700s, and by Dickens’s time their attendance at even relatively modest funerals was almost mandatory. They were a key part of the Victorians’ extravagant mourning rituals, which Dickens often savaged as pointlessly, and often ruinously, expensive. In Martin Chuzzlewit, for instance: “Two mutes were at the house-door, looking as mournful as could reasonably be expected of men with such a thriving job in hand.” Mutes died out in the 1880s/90s and were a memory by 1914. Dickens played his part in their demise, as did fashion. Victorian funeral etiquette was complex and constantly changing, as befitted a huge industry, which partly depended on status anxiety for the huge profits Dickens criticised. What did for them most of all, though, was becoming figures of fun – mournful and sober at the funeral, but often drunk shortly afterwards.

Ah well, on that cheerful note I will go back to thinking where I can hang my Rowlandson print without causing a domestic scene….