Going on holiday, 1773: Stone Henge, Wilton House – and more besides…

As the holiday season is upon us I thought I would look back to the events of 1773, and see what my ancestor was up to. Sure enough, he was just about to set off from London to go down to Salisbury, do a spot of sight-seeing (Wilton House, Stonehenge etc) and then head for his ‘holiday home’ in the Cotswolds. A chance to take tea with loads of friends, attend a few sermons, eat and drink at lots of pubs called the White Hart, the White Swan, the White Almost-anything, and then head for Oxford and back to London via Uxbridge. His coach broke down on the way – ah, those were the days, with no RAC to come to the rescue…. 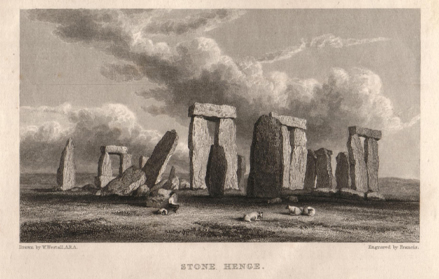 Stonehenge in the 18th Century, image courtesy of the Salisbury Museum

For those with good transcription skills, here are the actual entries:- 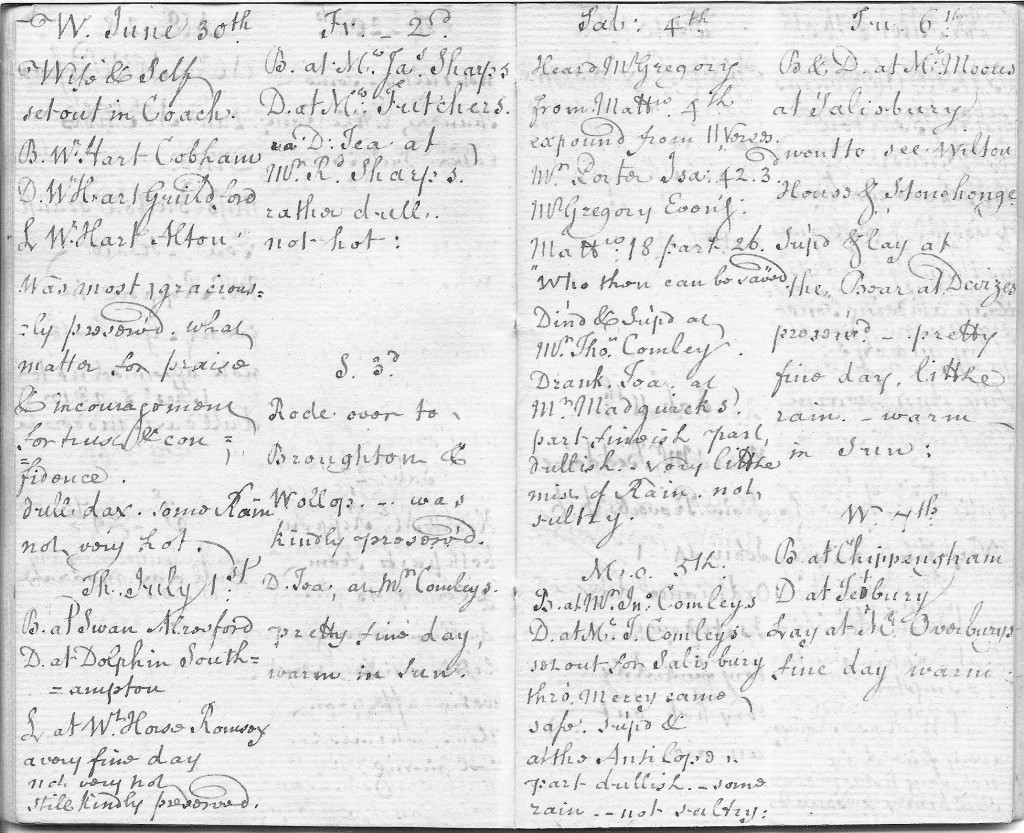 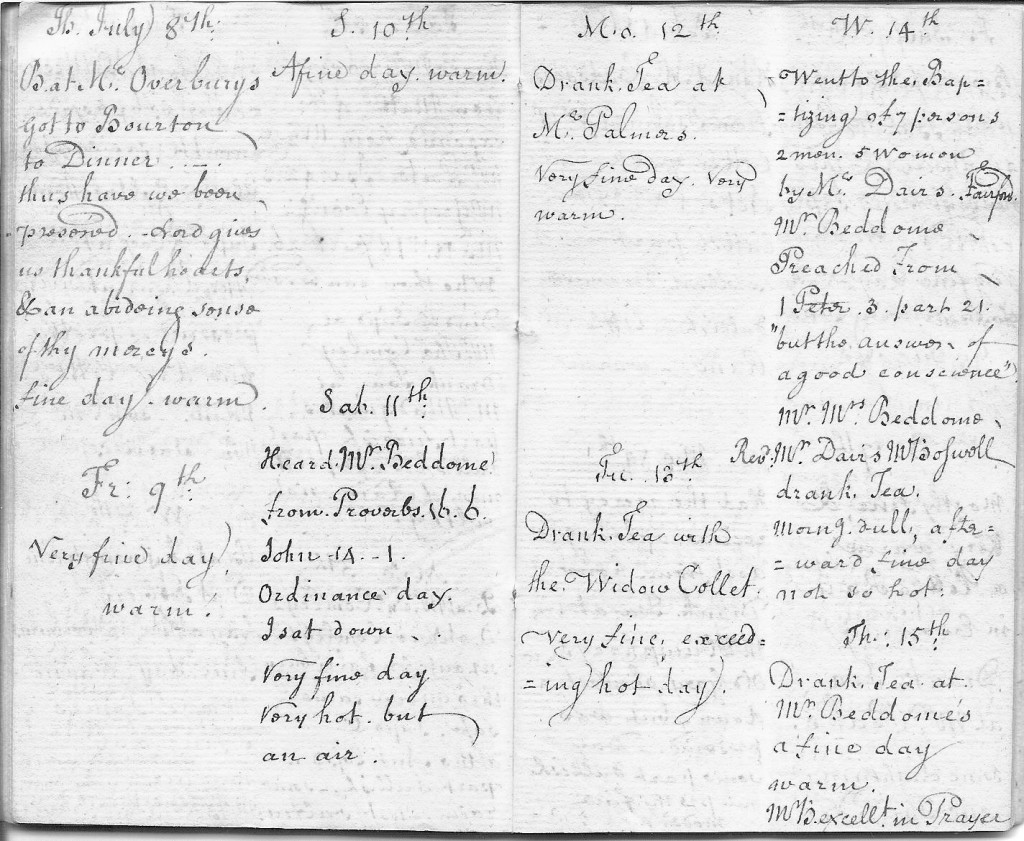 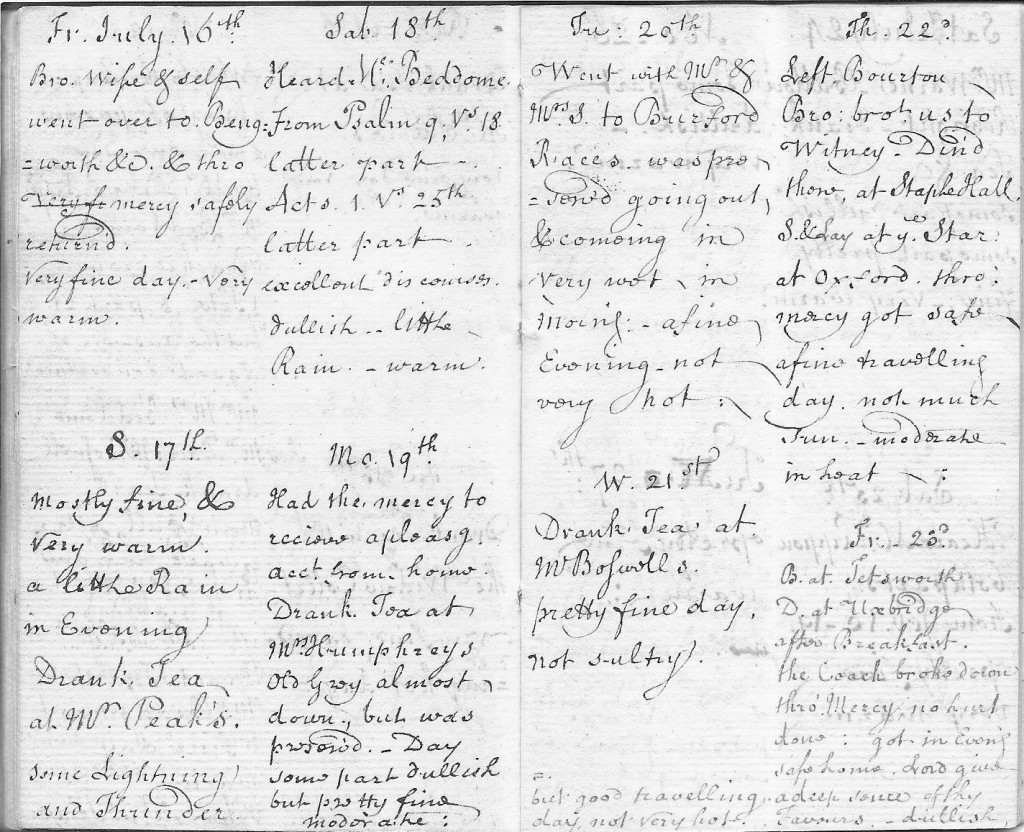 The next day he managed a Breakfast at The Swan at Alresford and  Dinner at the Dolphin at Southampton (still there, if I remember correctly from my university days) and then took Supper at the White Horse at Romsey. By then it was very fine, not very hot, and as usual he noted that  he was “kindly preserved”. Presumably the coach would have passed what is now Broadlands at Romsey – acquired by Henry Temple, 1st Viscount Palmerston  in 1736, and the subject of a major refurbishment under the auspices of Henry Holland starting in 1767. By the time that Richard rode by, the massive landscaping works proposed by Capability Brown were well under way, part of a de-formalisation process designed to produce the ‘broad-lands’ i.e. the “gentle descent to the river. 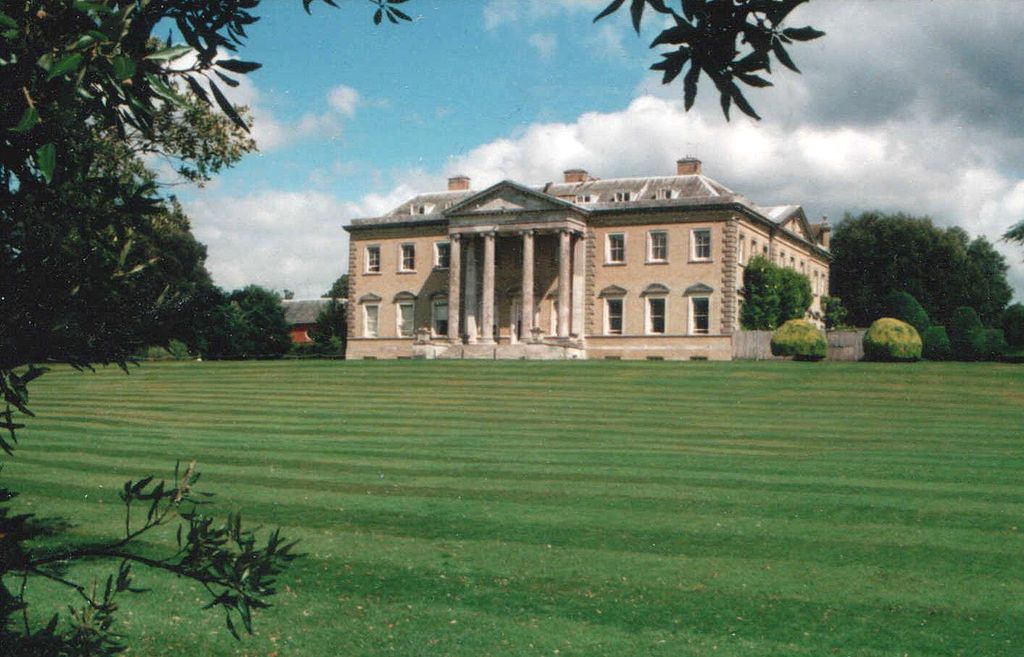 The house at Broadlands, Romsey, designed in the Palladian style.

The pace continued  the next day (2 July) with Breakfast at Mr James Sharp’s, Dinner at Mrs Futchers before going on to take tea with Richard Sharps. No mention of Supper that day – perhaps he ate all the cake at tea time. Or maybe his appetite was tempered because the day was rather dull, and not hot.

Richard presumably borrowed a horse the next day, because he rode over to Broughton and the Wollops on 3 July, where it was warm in the sun, being pretty fine. He drank tea at Mr Comleys. Mr Comley’s name doesn’t appear elsewhere in Richard’s diaries, but the family were presumably close friends because he stayed the following day with them (Sunday, so attending church for a double whammy of sermons by both Mr Porter and Mr Gregory) with a quick visit to Mr Madgwicks for tea. A spot of Breakfast and Dinner the next day with the Comley’s was followed by a leisurely drive over to Salisbury, arriving just in time to take Supper at the Antelope. No matter that he called it The Antilope, the hotel/restaurant is still going strong, in the Vale of Pewsey, and is a well-known, 300 year-old, coaching inn. They owe me a  pint for the mention….

Whereas the previous day seems to have been marked by “a little mist of rain”  Monday was “part dullish, some rain, not sultry.”

On Tuesday he had Breakfast and Dinner at Mr Moon’s at Salisbury, no doubt giving him an opportunity to look round the cathedral. Certainly he jotted down elsewhere the number of windows and doors in the cathedral, so he was presumably impressed…. then he trotted off to see the stunningly magnificent Wilton House ( – often featured in period dramas such as  The Madness of King George, Mrs. Brown, Pride and Prejudice and The Young Victoria)  and then dashed over to see Stonehenge.

That evening saw him in Devizes, where he supped and laid at The Bear, another famous coaching Inn, where the young artist Thomas Lawrence would entertain the guests with his drawings and sketches, and with his poetry recitations. Mind you, I may have got the place wrong, because Richard may well have written The Boar rather than The Bear, and I know nothing whatsoever of The Boar….

The weather seems to have been typically British – fine but with rain, and warm in the sun. The next day saw him break his fast at Chippenham and take Dinner at Tetbury, staying at the Overbury’s place. On July 8th he set off early and got to Bourton in time for Dinner (lunch to you and me). A chance to take Tea with the Widow Collet, but by mid-week it was very hot. I am not quite sure what “I sat down” on Sunday 11 July signified, but it must have been pleasant because  it was very fine, very hot, but “with an air.” 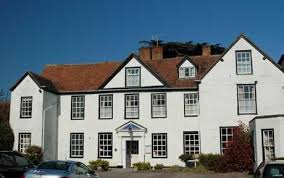 The Mansion House at Bengeworth, now known as the Evesham Hotel

On 16 July he headed off with his wife and brother-in-law William Snooke to go to Bengeworth – no doubt to visit Bengeworth Mansion House  (now known as The Evesham Hotel) which Richard had inherited some twenty years previously on the death of his in-laws the Sewards.  All was well (it was tenanted by the local vicar at £25 p.a.) and through Mercy he was  safely returned.  That week was marked by thunder and lightning, and he appears to have had a narrow escape when his Old Grey nearly threw him on 19 July.  The next day saw him go to Burford Races where he appears to have got a soaking in the rain, although it was fine by the evening. I can just imagine him humming the tune as he rode home after the summer showers….

Some more Tea, and then his brother in law appears to have volunteered to see him off the premises, driving him in his Chaise as far as Witney.  Richard and his wife then got the Stage Coach to Oxford, staying at The Star. No doubt he was grateful that it was  “a fine travelling day, not much sun, moderate in heat.”

Friday 23 saw the last leg of the journey, so he Breakfasted at Tetsworth, and took Dinner at Uxbridge but only after the coach broke down. “Through Mercy, no hurt done”. He got in safe home that evening, recording faithfully his gratitude to the Almighty – “Lord give a deep sense of thy favours – dullish”.

Ah well, holidays were over, and it was back to the grindstone of life as a haberdasher at One London Bridge, where he had left his 18 year old son William in charge of the shop…..