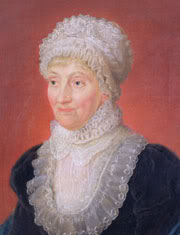 It is hard to imagine a less likely heroine than Caroline Lucretia Herschel, born on 16 March 1750 into a highly musical Hanoverian family. She did not have an awful lot going for her: she caught smallpox at the age of three and this left her disfigured and facially scarred; she caught typhus at the age of ten and this stunted her growth (she apparently scaled the heights at four feet three inches). Her looks ‘were not considered likely to gain her a husband’ – a polite way of saying that she was somewhat unattractive in her appearance and indeed she never married. Her parents therefore decided that she would only ever get a job as a home help. As such her mother decided that she was scarcely worth the bother of educating – to the extent that she never did learn her multiplication tables to her dying day on 9 January 1848 at the age of 96.

She had two things going for her: one was that Britain and Hanover were ruled by the same monarch and therefore travel between the two countries was unrestricted because she was considered to be a British subject: and she had an elder brother Wilhelm who had already moved to Bath. Following the death of their father Isaak in 1767 she had stayed on in the kitchens as a maid, until Wilhelm invited her to stay with him in Bath in 1772. It was to result in a partnership which brought considerable fame and a reasonable fortune to both of the siblings.

Wilhelm had been an oboist in the army before coming to Britain and he got a job as a music teacher and organist at a school at at 19 New King Street (now the site of the Herschel Museum of Astronomy).

He was also appointed choirmaster at the Octagon Chapel and in this context was able to Wilhelm give his kid sister (she was 12 years his junior) regular singing lessons in order that she might be able to support herself financially. She became highly proficient and with a fine singing voice she performed up to five times a week in Bath and Bristol.

Wilhelm was fascinated by the heavens at night and spent hours studying the stars.

His sister kept him company on what would otherwise have been a lonely vigil and together they made some remarkable discoveries. I will cover Wilhelm in a later post. Suffice to say he discovered a new planet (Uranus) and noted dozens of double stars, planets and nebulae. He was knighted for his services and received a personal appointment as Astronomer to the King.

But it is Caroline who intrigues me. She had the precision and accuracy to polish the metal mirrors which were used in the telescopes of the day. She was the one who made notes, corrections and organized his observations. She was also encouraged by her brother to learn about astronomy and in the 1780’s she discovered three nebulae and, in 1786, her first comet. Another seven comets were discovered by her over the next few years. Her brother went on to build the biggest telescope in the world. But she was also recognized as an astronomer in her own right, and received a state salary of fifty pounds per annum for services to science – making her the very first woman in this country to be rewarded in this way.

But all this was in the future in 1788 when to her shock and horror her brother decided to get married (at the age of 51) to a wealthy widow called Mary Pitt. Caroline was extremely possessive of her brother and was at constant loggerheads with the new Mrs Herschel, not least over the upbringing of Master John who was born in 1792. In fact the son went on to be another brilliant astronomer, building on the family reputation by discovering 525 nebullae and clusters and becoming President of the Royal Society in 1850 (and in 1855 being appointed Master of the Royal Mint).

Brother Wilhelm may have had other night-time distractions but Caroline pursued her astronomical interests with renewed vigour. Her bitterness revitalized her. In 1798 she published an updated version of Flamsteed’s star catalogue (to include an extra 500 stars omitted from the original work). She became a friend of the Royal family, staying with them on a number of occasions. When her brother died in 1822 she returned to her native Hanover but continued with her astronomy studies, including the completion of a catalogue of some 2500 nebullae noted by her late brother.

She was a remarkable woman who achieved remarkable things. To her brother goes most of the fame and prestige – but he would never have managed it without his sister. And just imagine what she might have achieved if only she had been taught mathematics and in particular her multiplication tables! After all, she helped pioneer the modern mathematical approach to astronomy! 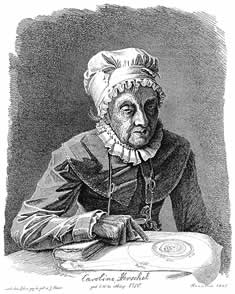 P.S. This repeats a blog I posted elsewhere last summer but I felt it was worth repeating on the anniversary of Caroline’s birth.