Reading about the history of preserving foods in the late 18th and early 19th Centuries is to marvel at the differences between the French and the English. The French experimented with preserving food in glass jars. Not just any old food, but esoteric delights such as “A matelot of eels, carp and pike, with veal sweetbreads, mushrooms and anchovy butter, the whole cooked in white wine”.

An Appert flask, courtesy of Wikipedia

The British on the other hand took over the invention, substituted metal canisters (shortened to ‘cans’) for the glass bottles, and then, well, then waited another forty years for someone to invent the can opener!

If this proves nothing else, it demonstrates the French love of fine food, and the eccentricity of the British in coming up with an invention no-one knew how to use.

First: the French. Napoleon knew only too well the adage that an army fights on its stomach. For centuries it had been a problem for armies everywhere – where to get the food which your troops can rely on. If you are invading Russia or Spain in the depths of winter you cannot expect to live off the land you are conquering. In much the same way you won’t get the best out of your men if you drag them halfway across Europe on a diet of salted meat and weevil-infested dried biscuits. So Napoleon issued a challenge: come up with an effective way of storing and preserving food and the State would award a prize of 12,000 francs. 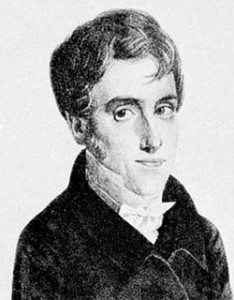 The challenge was taken up by Nicolas Appert, a man who had trained not just as a brewer and a confectioner but also as a chef. If anyone was experienced in food preparation and storage, and had experience of the effect of heat on food, it was our man Appert. What he discovered was that slow cooking of the food, without letting the air get to it, and immediately sealing it in a tightly stoppered bottle, would enable the contents to be kept for a very long time. What he did not know (because Pasteur did not come up with his ideas on microbes for another half century or so) was why this was the case.

He experimented with all types of food, from meats to vegetables and even milk. He got the local glass-maker to come up with wide-necked bottles to enable him to fill them more readily. A loose cork was fitted and the jar with its contents was placed in a bath of heated water. As the contents expanded the air in the bottle was driven off; the jar was then sealed tightly using cork tops held down by wire and sealed with wax to stop any air getting in, and the whole thing was then re-heated to boiling point. 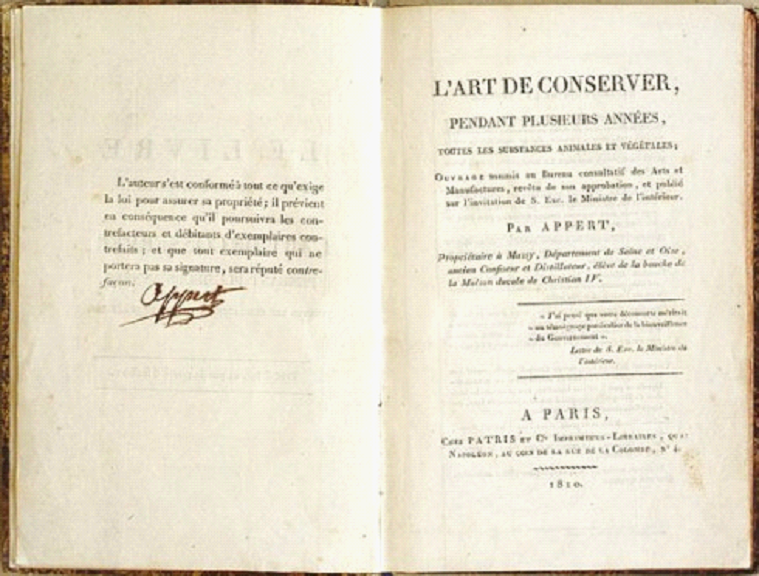 For 15 years Appert toiled over his hot stove, often having to wait months to see if the food and taste quality were correctly preserved. By 1804 he had a fairly shrewd idea how long each food type needed to be cooked. From 1806 onwards the French navy started evaluating the fruits of his labours (or more prosaically, they ate the contents of the jars and lived to tell the tale). Finally, in 1810 Appert published the results of his hard work. It was translated into English as: ‘The Art of Preserving All Kinds of Animal and Vegetable Substances for Several Years’. 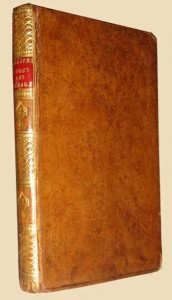 It wasn’t the catchiest of titles but it sold well and more to the point it was enough to win him his prize. Both the French Army and the Navy placed orders for his delicacies. Napoleon was on the move, no longer limited to spring and summer campaigns!

Much of the award was ploughed back into developing a food processing factory (ironically it was to be destroyed a couple of years later when invading English troops razed it to the ground in 1814). Undeterred, the factory was rebuilt and although Appert died a relatively poor man in 1841,his family grew wealthy on the eventual profits. The family factory existed into the 20th Century.

The English version of Appert’s book was read by a man called Peter Durand. He could see the problems of spoilage and breakages caused by the glass jars breaking or leaking, and decided that what the world really wanted was the tin can. Unbreakable, lighter than glass, stackable, and capable of being made in all shapes and sizes, Durand would have known that for upwards of a century tin from the mines in Cornwall had been plated onto iron to produce a rust-proof surface. He may even have known that Dutch fishermen had been sticking pieces of salmon (first boiled and then smoked) into tin boxes since the 1770’s.

Whatever, Durand took out a patent for his sealed can in 1810 and then approached the London iron foundry of John Hall and Bryan Donkin and persuaded them to carry our trials in terms of how hot, and for how long, the food should be prepared. Donkin and Hall were so impressed they bought out Durand’s patent. They tested the soldered seams, and by 1812 the tin can was ready for production. The world’s first canning factory opened in Bermondsey the following year, under the name of Donkin Hall and Gamble. As a safety check, stacks of the containers were put into a specially designed test chamber where they were heated to 100 degrees Fahrenheit for up to five weeks. The manufacturers claimed that if the cans could survive this without the contents exploding (i.e. with expanding gases caused by decomposition) they could survive anything. Immediately, the Royal Navy bought the new-fangled containers, bringing soups, vegetables and fruit into the diet of sailors otherwise at risk from scurvy. That, and a fairly high risk of lead poisoning from the use of lead in the solder…. 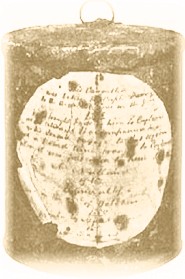 One of Parry’s tin cans which evaded the hammer and chisel.

And so it was that when Sir William Edward Parry headed for the Arctic in 1824 on board HMS Fury, looking for the North West Passage, he took with him a tin or two of roast veal, and some tinned pea soup. The main problem was that until the tin opener was invented by Robert Yeates in 1855 you had to attack the lid with a bayonet, or hit it with a hammer and chisel. Try doing that when your hands are suffering from frostbite…

Early canning was never cheap. One of the problems faced by the canners was the time taken to make each can: a skilled tinsmith could make perhaps half a dozen in a working day. Mechanization eventually came in, with the invention of a machine which not only stamped out the body but could also solder the ends. But even with speedier production methods the actual cooking time (five hours in boiling water to make the can and the food inside completely sterile) meant that it was never a cheap way of feeding the hungry. As ever, it was war which launched the tin can in the USA, where imports had started in 1819. Initially hardly anyone wanted to eat food out of a tin, and only with the advent of the Civil War did sales of canned foodstuffs really take off. 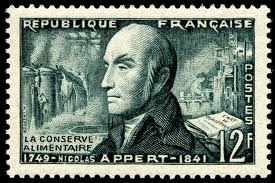 So spare a thought for the gourmet of the 18th Century: before cans came along almost all your food was either fresh (but therefore seasonal) or salted, dried or pickled. At this wintry time of year, Spring, with fresh vegetables and more particularly fresh meat, must have seemed an awfully long way away. So: happy birthday Monsieur Appert and all who followed down the path you blazed. (Well, except where it led us to Pot Noodles….).