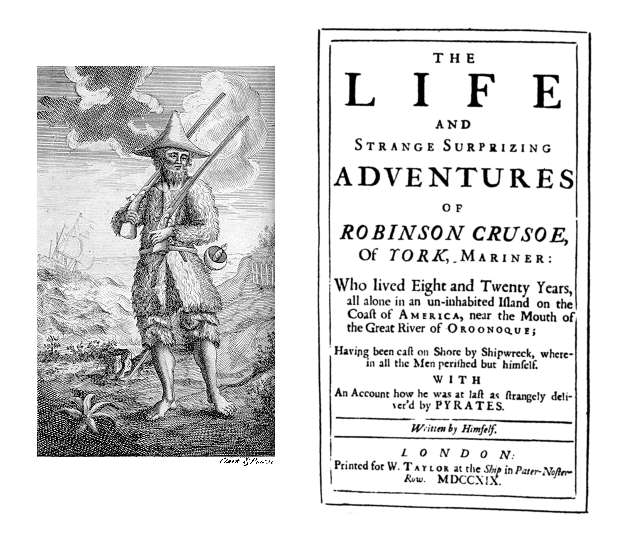 There are not many books which celebrate a tercentenary – and are still in print. Even fewer can claim to have been translated into every single major world language – and spawned variations in opera, in films, on television and on radio, in cartoon strips and in computer games. The book is, of course, “Robinson Crusoe”, published on 25 April 1716 and in the intervening centuries more than 700 different editions have appeared. 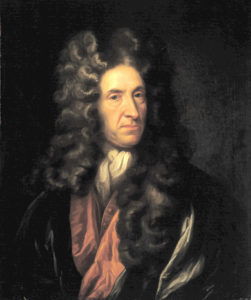 The book didn’t hang around on the bookshelves for long – the public were entranced by the story of a castaway’s struggle for survival, and four editions appeared in its first year alone. Pirated versions flooded the market. The author, Daniel Defoe, wrote a follow-up entitled “Farther Adventures of Robinson Crusoe”, which came out in late 1719. For the better part of a century it was customary for the two stories to be sold as a two-volume set, although nowadays the “Farther Adventures” have dropped off the graph. For anyone interested, the “Farther Adventures” see Crusoe return to his island, before heading for Brazil, across to the tip of South Africa, and round to Madagascar where he is marooned for several years. Incredibly, his round-the-world peripatetic existence sees him walk across China, into Russia, through Siberia and over to Archangel before catching a lift back to London on a passing ship.

Personally, I think Defoe should have left his hero at the end of the original book and not bothered with Part Two. Undeterred, Defoe even wrote a third book in the series – but this time as a non-fiction work looking at the underlying themes such as Sin, Redemption and so on. This third part bombed totally and, thankfully, disappeared without trace.

But Robinson Crusoe deserves to be celebrated – even if nowadays it is often reduced to a children’s adventure story. It struck a chord with 18th century audiences, and it still strikes a chord today. Think of the Tom Hanks film “Cast Away”, in which he plays the part of a FedEx employee stuck on a Pacific Island after a plane crash. The story was so realistic that people assume that it was based upon a real-life incident – it wasn’t. Or think of “The Martian” with Matt Damon – it explores exactly the same themes covered in Defoe’s novel and poses the same question: how would we manage if we were stripped of all the trappings of modern civilization?

It’s a theme which is reflected in the radio programme “Desert Island Discs” (now running for over 75 years) and in Reality TV programmes such as “I’m a Celebrity – Get me out of here”. And it has spawned any number of television programmes where a celeb is stranded ‘alone’ and expected to cope. Off hand I recall  the model Julie Ege using it as an excuse for a bikini-modelling shoot, and Joanna Lumley being cast adrift on an island off Madagascar – and making a pair of cave shoes out of her bra. More recently, the actor Robson Greene had himself cast adrift on a remote Indonesian island. From memory he lasted all of three hours before being whisked away suffering from stomach problems, which rather suggests that he wasn’t quite as ‘alone’ as the programme would have us believe. 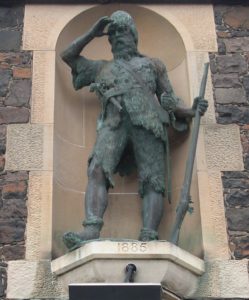 Defoe’s “Robinson Crusoe “was based upon a number of real-life incidents. Usually  Alexander Selkirk is trailed as being the main source – but I rather think that Defoe, a journalist, was happy to meld a number of different escapades. For my money, these definitely include the experiences of William Dampier. Not only did he circumnavigate the world three times – and write a travelog which was hugely popular – but he was stranded on the then uninhabited island of Ascension in the middle of the Atlantic Ocean. He also returned to Britain with a ‘Man Friday’ in tow – a native from the Philippines named Prince Geolo (otherwise Jeoly) and who was exhibited as a sort of travelling freak show so that visitors could gawp at his tattoos. Sadly, the Painted Prince (as he was referred to)    caught smallpox and died in Oxford shortly after he reached these sickly climes, but his story would have been well-known to Defoe.

Another likely inspiration for Defoe’s ultimate castaway hero was  Henry Pitman, an English-born supporter of the Duke of Monmouth who was sent to Barbados as an indentured servant but who escaped and lived for some time on an island near Aruba in the Caribbean, encountering cannibals and pirates along the way. Another contributor may have been Robert Knox, abandoned on the island of Ceylon for over twenty years, and who wrote a lengthy journal describing his battle for survival, his mental trials and tribulations, and his ultimate escape. It even comes complete with a description of the power of an unexpected footprint in the sand…. 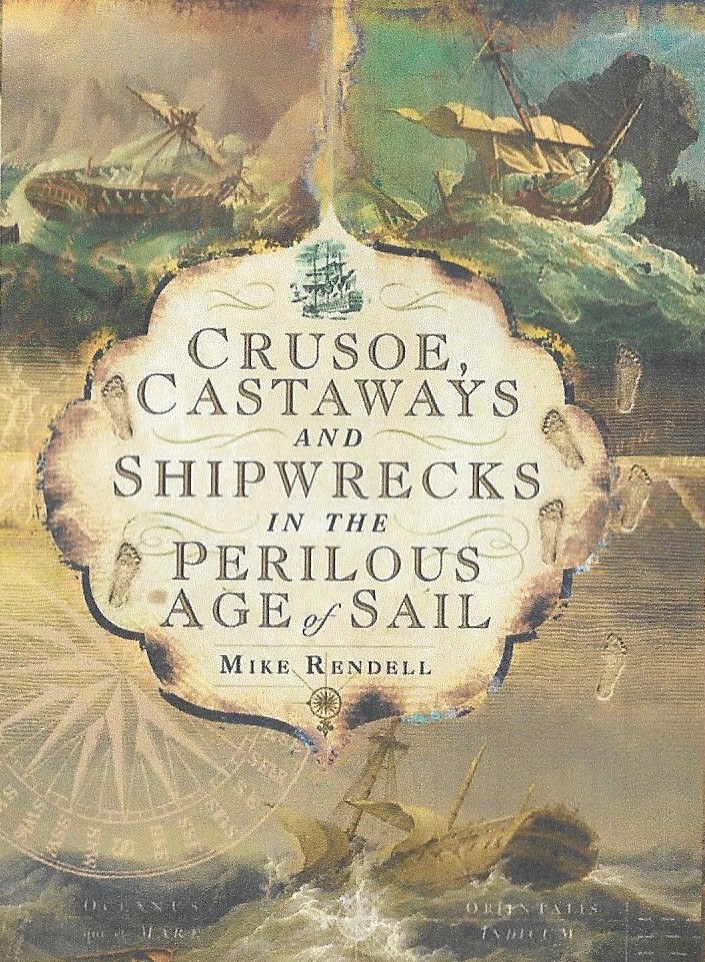 To mark this auspicious day, I have brought out my latest book, published by Pen & Sword, called “Crusoe, Castaways and Shipwrecks in the Perilous Age of Sail”. It looks at the phenomenal success of what has been described as the first English novel, considers the various real-life incidents which may have influenced Defoe, and puts the book in context of the many maritime disasters which befell sailors on the eighteenth century. Horrific storms, mutiny, faulty navigation leading to shipwrecks, piracy, broken compasses – all could result in loss of life, but also in remarkable tales of survival. No-one would think that being stranded was a bowl of cherries – but Defoe showed that it could fire the public interest. 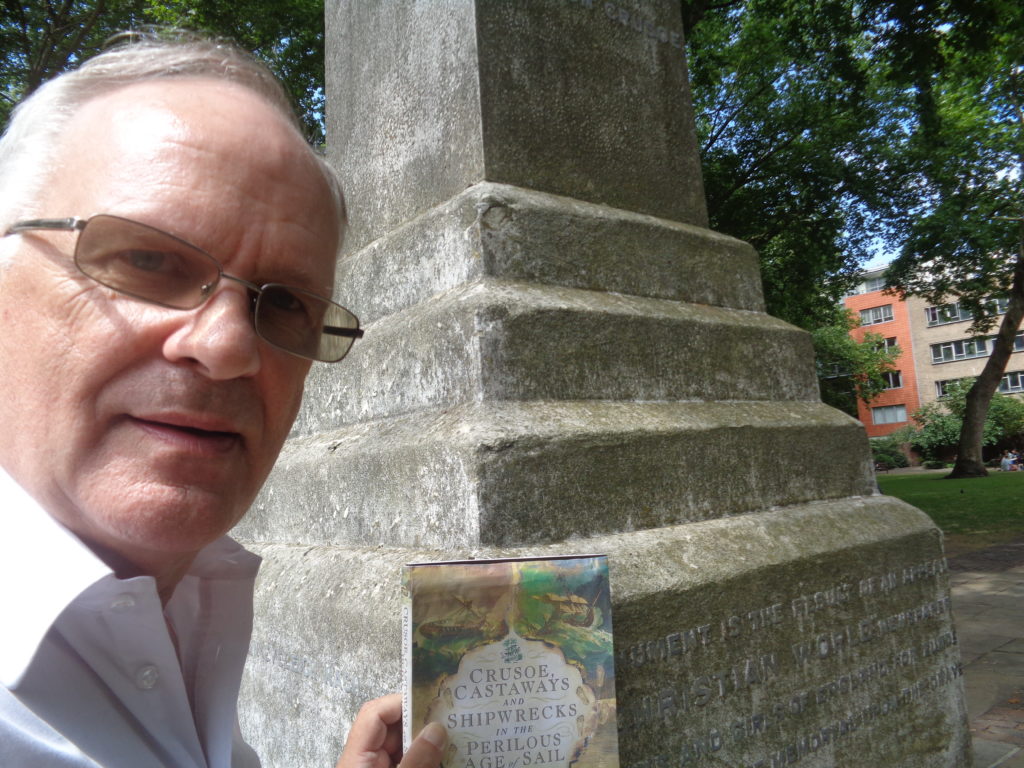 Yours truly, plus book, in front of the memorial to Daniel Defoe in the Bunhill Fields Burial Ground in London.