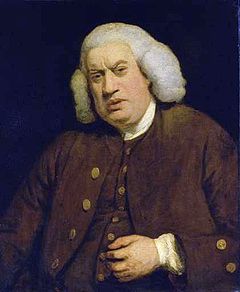 Some time after 1799 my ancestor Richard Hall decided to buy a copy of Dr Johnson’s Dictionary at a cost of three shillings and sixpence, bound, and noted the details in his diary. In fact many of these dictionaries shamelessly used the name Dr Johnson as part of their title and then simply listed the words which he had selected in his original two-volume set. They often missed off the full meanings of words and omitted examples of quotations which were the hall-mark of the original work. The ‘miniatures’ (the equivalent of a modern paperback or pocket sized edition), were intended particularly for school use. 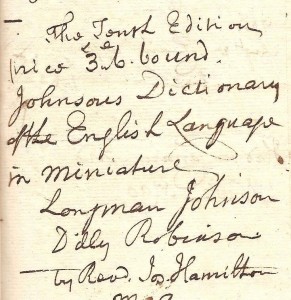 Many added ‘useful extras’ such as this one: 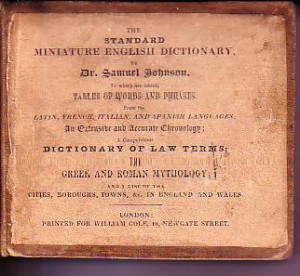 shown courtesy of Abe Books (yours for a shade over £250 to include post and packing!).

Johnson had published his original Dictionary of the English Language on 15th April 1755. It marked the culmination of years of labour. Poor Johnson – he had originally been a teacher in Lichfield in Staffordshire but apparently his pupils did not appreciate his teaching skills. Indeed it is quite possible that he suffered from Tourette’s Syndrome, with complaints about his ‘oddities of manner and uncouth gesticulation’. Throughout his life he suffered from a tic, emphasised by him uttering strange noises ‘as if clucking like a hen” or exhaling air ‘like a whale’ These oddities of manner forced him to move to London in 1737 and for the next decade he scraped a fairly miserable living writing for magazines and struggling to keep his creditors at bay. Fortunately he had been befriended by the actor David Garrick (indeed the latter had been a pupil of his) and Garrick knew his way around London and effected numerous introductions for him. Eventually he was asked by the bookseller Robert Dodsley to compile a definitive dictionary of the English Language. It was not the first attempt – there had been a score of earlier versions spread over the preceding 200 years, but Johnson took things to an entirely new level of erudition and scholarship. The Earl of Chesterfield agreed to act as patron to the project and to pay Johnson the huge fee of 1500 guineas.

Whereas the French had their forty ‘immortals’ (a committee of learned men who made up the Académie Française who would take upwards of fiftyfive years to compile their Dictionnaire) Johnson set-to with between four and six helpers and completed the whole task in a little over 8 years. He was determined to ‘straighten out’ the language, aiming loftily “[O]ne great end of this undertaking is to fix the English language.” In this aim he can be said to have failed miserably, since English refuses to stop growing and evolving. 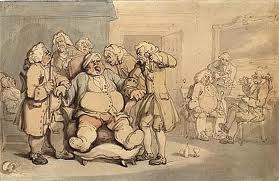 Johnson ended his days gout-ridden and in great pain. He was buried in Westminster Abbey on Christmas Eve 1784.

A plethora of pocket editions appeared shortly after Johnson’s death. They sold in their thousands, both in England and overseas, with editions being printed throughout the Nineteenth Century. And so it is that it is a copy of the miniature dictionary which Thackeray has Becky Sharpe hurl out of the carriage window in Vanity Fair (1847).

For a hundred and fifty years, until the Oxford English Dictionary appeared on the scene, Dr Johnson’s Dictionary was the pre-eminent source of words, their meaning, pronunciation, and use.

The definition reads “A small red fish which swims backwards” – and the word this is supposed to describe? A crab. But a crab is not necessarily small. Indeed it is not a fish. It is not always red. It does not swim – it crawls. Its movement is sideways not backwards.

So, a masterpiece of inaccuracy on the part of the lexicographer, with every single word being erroneous. And yet….most of us would immediately recognize the description. As Blackadder says to Dr Johnson in the penultimate (and finest) series of Blackadder, it is enough to throw you into a state of total discombobulation.