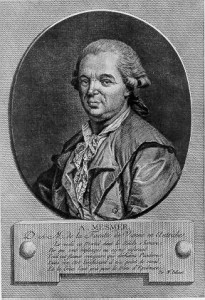 If Richard was in the astonished audience watching Mozart, the eight year old child-prodigy, perform in London in 1764 would he have been mesmerized at the skills of the young Wolfgang Amadeus? If Richard went to see Daniel Mendoza box Richard Humphries in 1790 would he have marvelled at the mesmeric style of boxing, which Mendoza himself called “side-stepping”, (darting to one side, ducking, blocking, and, all in all, avoiding punches through speed and quick reactions)?

No, most unlikely , because ‘mesmerize’ and ‘mesmeric’ are words which owe their existence to an Austrian doctor called Mesmer and there is no evidence to show that his surname was used either as a basis for a verb or as an adjective before 1800.

The Oxford Dictionary gives these definitions:

Mesmeric: Pertaining to, characteristic of, producing or produced by mesmerism.

Mesmerism: the doctrine or system popularized by Mesmer according to which a hypnotic state, usually accompanied by a insensibility to pain, and muscular rigidity, can be induced by an influence (at first known as animal magnetism) exercised by an operator over the will and nervous system of the patient.

Franz Anton Mesmer was born near Lake Constance on 23 May 1734 and lived until 5 March 1815. In 1759 he attended Vienna University and a few years later published a dissertation entitled ‘De planetarum influxu in corpus humanum’ (‘On the Influence of the Planets on the Human Body’). He was convinced that there was an energy flow, which he believed was a type of magnetism, running through all living creatures. He surmised that it was blockages to this flow which caused illness.

It must be remembered that magnetism was the new ‘big thing’ in science. Mesmer distinguished his magnetism, which he termed animal magnetism, from planetary magnetism and mineral magnetism (such as could be found in lodestones). He would experiment by bleeding patients and then running a magnet over the wound, noting that this would staunch the flow. Later he experimented with waving a wooden ‘wand’ over the cut and achieved the same result. But he did not consider that the waving of the stick to and fro caused hypnosis (indeed the concept of hypnosis had not been articulated until 1843 when James Braid, a Scottish physician, coined the word). 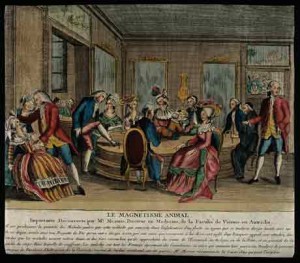 Instead he thought that the wand and laying on of hands demonstrated ‘animal magnetism’ at work. In this he was much influenced by the work of Father Gasser, an Austrian priest who was, unwittingly, a great hypnotist. Mesmer studied Gassner’s work and carried out his own experiments but found himself up against a large amount of opposition and ridicule. He headed for Paris, reasoning that the inhabitants would be far more receptive to new ideas. He was right, and he quickly became famous. To start with he would treat patients individually, but realized that he could make more money if he treated people as a group. 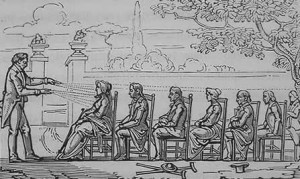 Patients in a row under the magnetized oak

He used two different approaches: in one he sat his patients beneath the branches of a ‘magnetized’ oak tree, while those seeking an indoor treatment were crowded in around a baquet or magnetized tub.

An English physician who witnessed the scene around the baquet wrote:

“In the middle of the room is placed a vessel of about a foot and a half high which is called here a “baquet”. It is so large that twenty people can easily sit round it; near the edge of the lid which covers it, there are holes pierced corresponding to the number of persons who are to surround it;

into these holes are introduced iron rods, bent at right angles outwards, and of different heights, so as to answer to the part of the body to which they are to be applied. Besides these rods, there is a rope which communicates between the baquet and one of the patients, and from him is carried to another, and so on the whole round. The most sensible effects are produced on the approach of Mesmer, who is said to convey the fluid by certain motions of his hands or eyes, without touching the person. I have talked with several who have witnessed these effects, who have convulsions occasioned and removed by a movement of the hand…”

A slightly more detailed description is given in Issue 21 of the journal Cabinet (Spring 2006) by Christopher Turner:    “….a group of patients would sit or stand around this device in such a way as to press the afflicted areas of their bodies against these moveable metal wishbones and, bound to the instrument by the ropes, would link fingers to complete an “electric” circuit. The atmosphere in which these sessions took place was heavy with incense and séance-like; the music of a glass harmonica …. provided a haunting soundtrack, and thick drapes, mirrors, and astrological symbols decorated the opulent, half-lit room.

Franz Anton Mesmer, the legendary Viennese healer, hypnotist, and showman, would enter this baroque salon of his own invention wearing flamboyant gold slippers and a lilac silk robe. He would prowl around the expectant, highly charged circle, sending clients into trances with his enthralling brown-eyed stare. By slowly passing his hands over patients’ bodies, or with a simple flick of his magnetized wand, Mesmer would provoke screams, fits of contagious hysterical laughter, vomiting, and dramatic convulsions. These effects were considered cathartic and curative. When a patient’s seizures became so exaggerated as to be dangerous or disruptive, Mesmer’s valet, Antoine, would carry him or her to the sanctuary of a mattress-lined “crisis room” where the screams would be muffled.”
Conventional physicians were alarmed at the success enjoyed by Mesmer – and in 1784 petitioned the French King to convene a board of inquiry. The board included the French chemist Lavoisier, the American inventor/diplomat Benjamin Franklin and the French scientist Dr Guillotin. They tested Mesmer’s theories and dismissed them as nonsense – concluding that if patients got better it was not because of ‘animal magnetism’ but auto-suggestion. Patients got better because they wanted to be better.

Mesmer’s reputation was in tatters. His patients kept away and he became mired in lawsuits and libel cases. Eventually he was forced to leave Paris for Switzerland, where he lived in relative obscurity until his death in 1815. But he deserves to be remembered – he may not have known that he was experimenting with hypnotism, but his work enabled later research to be made into the way the human body could sometimes heal itself  when the subject was put into a trance-like state. He pioneered hypnotic therapy and certainly deserved his very own gold medal.

2 Responses to “Birthday greetings to the mesmerizing Dr Mesmer! Born 23rd May 1734,”