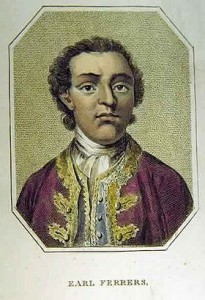 18th August 1720 marked the arrival in this world of someone born with not just the proverbial silver spoon in his mouth but with an entire canteen of hall-marked cutlery. His name: Laurence Shirley; he was to become Earl Ferrers and his story is one of arrogance, cruelty, dissolute living and ultimately murder.

His grandfather the First Earl had sired no fewer than 15 sons and 12 daughters (by two wives) and looking after that lot rather diminished the fortunes of the earldom. Nevertheless the title included family estates in Leicester, Derbyshire and Northamptonshire. Laurence’s father was the tenth son and Laurence inherited the title in 1745. It may be worth mentioning that there appears to have been a strain of madness in the family …

At the age of twenty he had turned his back on a University education (Oxford) and had gone to Paris where he displayed a talent for every excess especially drinking, gambling, fighting and whoring. He returned to England and initially set up home with a Mrs Clifford, by whom he had four daughters. Requiring a son once he succeeded to the earldom, he married a sixteen year old girl called Mary Meredith in 1752, but without giving up his mistress. For the young bride it must have been horrific. Her husband was twice her age; he was violent when drunk (which was often). She must have been humiliated by his womanising. Remember, this was a time when the rich – particularly the males, and especially the nobility – could do more-or-less what they wanted. As it turned out, the one thing they could not do was ‘get away with murder’.

All the more amazing that in 1758 Mary succeeded in petitioning Parliament for a formal separation from the Earl, on the basis of his cruelty. Parliament not only took the unusual step of awarding a formal separation (which must have cost Mary’s family a bomb) but also declared that the Earl’s assets should be controlled by trustees and that the trustees should pay Mary  rents and profits from the family estates. Laurence must have been furious at having to watch as he lost control of his affairs. Initially he had been keen to recommend his steward John Johnson as rent collector to the Trustees – John had worked for him loyally for some years and was good at book-keeping. Maybe he thought he could lean on John to ‘cook the books’ … we don’t know. But it appears that over time the Earl grew to distrust the steward, perhaps inevitably given John’s role as go-between, serving the Earl but paying his rents to the Earl´s  estranged wife. 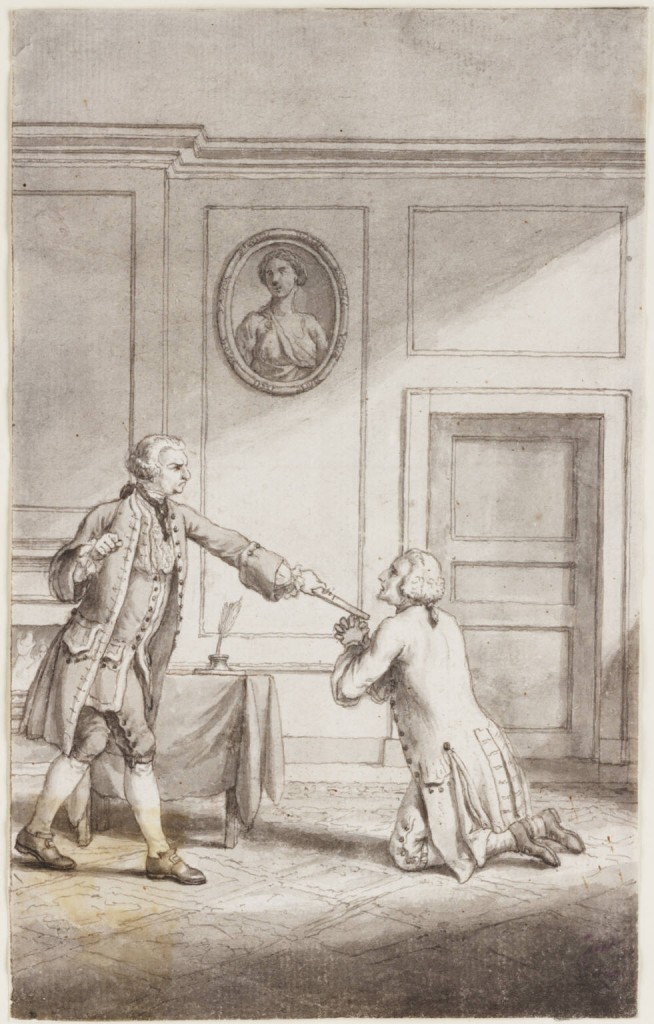 On Sunday 13th of January 1760 Earl Ferrers went to his home at at Stanton, about two miles from Ashby-de-la-Zouch in Leicestershire, and ordered the unfortunate Mr Johnson to come to him on the Friday following, at three o’clock in the afternoon. The steward arrived as requested on 18th January and waited to be summonsed to the Earl’s quarters. The Earl was still eating his lunch. After the meal he sent Mrs Clifford and her young daughters for a long walk and arranged for all five of the male servants to depart on sundry errands. This left only the three housemaids, an old man and a young boy in the house. He then called Mr Johnson into his Study, locked the door and, according to the Newgate Calendar, “being thus together, the Earl required him first to settle an account, and then, charging him with the villainy which he attributed to him, ordered him to kneel down. The unfortunate man went down on one knee; upon which the Earl, in a tone of voice loud enough to be heard by the maid-servants without, cried: “Down on your other knee! Declare that you have acted against Lord Ferrers. Your time is come — you must die.” Then suddenly drawing a pistol from his pocket, which was loaded, he presented it and immediately fired. The ball entered the body of the unfortunate man, but he rose up, and entreated that no further violence might be done him; and the female servants at that time coming to the door, being alarmed by the report, his lordship quitted the room.”

The Earl agreed that a doctor could be sent for, and went off for a drink or two in his private quarters, emerging worse for wear some hours later. He refused to let the doctor take the dying man away to his own house. The doctor patiently awaited until the earl retired to bed, and rigged up an easy chair with poles so that the dying man could be carried away in a makeshift sedan. He died the following morning at nine o’clock.

Come the morning and the Earl declined to give himself up – half-dressed he rode off on his horse, but a few hours later was confronted by an angry crowd and despite being armed with a blunderbuss, a brace of pistols and a dagger, was disarmed and taken before the magistrates. 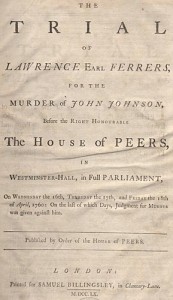 But the Earl was entitled to insist that his trial should take place before his peers in the House of Lords. Not for him the humiliation of being tried as a common criminal. He was permitted to drive in his landau, pulled by six horses, to London where in April his trial started in Westminster Hall. The Earl conducted his own defence, apparently most eloquently, which may have hindered rather than helped his claim that he was insane. He was found guilty – and at that stage he indicated a regret at having pleaded insanity, saying that he intended to kill his victim, and showing no remorse.

Murder carried an automatic death penalty. In vain the Earl pleaded to be dispatched in the manner of a nobleman, that is to say by being beheaded by a swordsman. But that penalty only applied to treason, and the Earl was forced to accept that he would end up in the hangman’s noose, just like any other common felon. He was however entitled to travel from his place of imprisonment (The Tower) to Tyburn in his own landau, accompanied by a guard of lancers. A huge crowd was in attendance to see the hanging and the journey to Tyburn took nearly three hours. The Earl was attired in his best white suit, richly embroidered with silver, (the one he wore at his wedding) saying “This is the suit in which I was married, and in which I will die.” A specially made set of gallows had been put up, furnished with black silk cushions for his Lordship’s comfort. 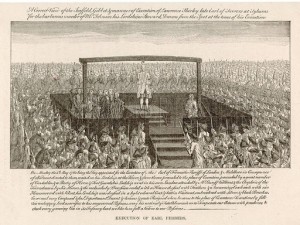 “The executioner now proceeded to do his duty, to which his lordship, with great resignation, submitted. His neck-cloth being taken off, and a white cap, which he had brought in his pocket, being put upon his head, his arms secured by a black sash, and the cord put round his neck, he advanced by three steps to the elevated part of the scaffold, and, standing under the cross-beam which went over it, which was also covered with black baize, he asked the executioner: “Am I right?” Then the cap was drawn over his face, and, upon a signal given by the sheriff (for his lordship, upon being before asked, declined to give one himself), that part upon which he stood instantly sank down from beneath his feet, and he was launched into eternity, the 5th of May, 1760.

The accustomed time of one hour being past, the coffin was raised up, with the greatest decency, to receive the body; and, being deposited in the hearse, was conveyed by the sheriffs, with the same procession, to Surgeons’ Hall, to undergo the remainder of the sentence. A large incision was then made from the neck to the bottom of the breast, and another across the throat; the lower part of the belly was laid open and the bowels taken away. It was afterwards publicly exposed to view in a room up one pair of stairs at the Hall; and on the evening of Thursday, the 8th of May, it was delivered to his friends for interment.”

He was the last member of the House of Lords to be hanged. It was considered to be his duty as a nobleman to die in a proper and dignified manner – he did his duty, but probably only for the first and last time in his life… 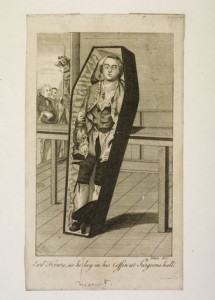 A contemporary etching of the deceased Earl in his coffin.

Post script: hopefully the widow of the unlovely Earl found solace after his death: she re-married but was to die in a house-fire some years later. A melancholy tale.