This post owes everything to the information given to me by the award-winning author Lynne Connolly. As ‘Lynne Connolly’ she writes historical romance, and as ‘L.M. Connolly’ spicy contemporary and paranormal romance. From my point of view, her added significance is that she is a direct descendant of a most remarkable woman called Hester Bateman. Hester was not just a success in a man’s world, she is renowned as one of the greatest silversmiths of the eighteenth century. Hers is a most remarkable story and I am most grateful to Lynne for helping me tell it.

Bunhill Row today, showing houses just down the road from where Hester had her workshop

Hester (in all probability she dropped the ‘H’ in conversation and was known as ‘Ester’ within the family) was born in 1708, and was baptised on 7 October of that year. Her father’s name was either John Neden or John Needham and she appears to have had little formal education. It has been suggested that she was wholly illiterate, which makes her subsequent business success all the more astonishing. At the age of 24 she married a wire-maker and chain-maker called John Bateman and proceeded to bear him six children in a short period of time. This meant that when her husband died in 1760, probably of tuberculosis, she found herself at the age of 52 with half a dozen children to bring up, and a business in which she had had no formal training. Interestingly, John bequeathed the tools of his trade to his widow, suggesting that maybe she was already well-versed in the world of making silver. But Hester must have been a determined lady: she could have taken the easy option and have sold the business – probably not for very much, since gold chain makers were ten-a-penny, and once the stock had been sold there would have been little or no goodwill. Wire-making was one of those ‘background’ trades involving the drawing of silver through a narrow gauge to produce a thin wire. As the century progressed, more and more silversmiths used the output of people like John Bateman to supply ready-made panels of metal decoration which could be applied to other silver products. The skills of people like John Bateman were absorbed into a sort of mass production process – but it was an anonymous and not particularly well-paid skill.

Instead of selling up, Hester decided to carry on the business on her own and to launch it in a completely new direction. Within months of her husband’s death she registered her initials ‘HB’ with the London Goldsmiths Company. This was on 16 April 1761 and the records show that she traded from 107 Bunhill Row. 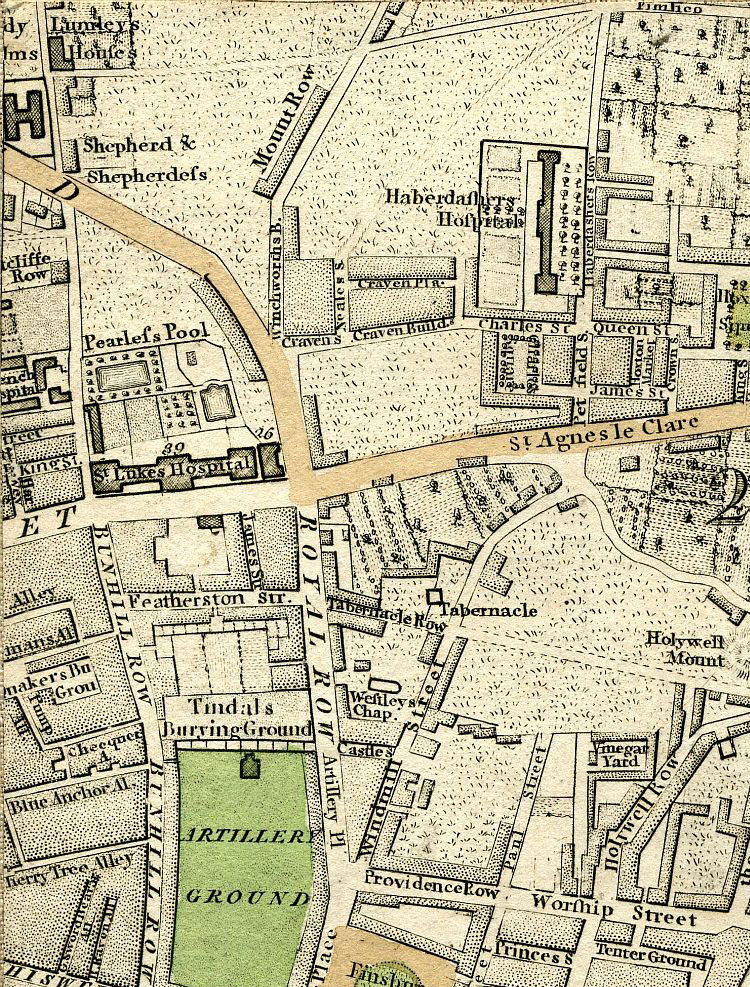 The actual premises no longer exist, but Bunhill Row appears on the left of the map by Cary dating from 1795. Little of the output from her workshop exists from the early years – quite possibly because she had yet to establish a name for herself and was reduced to selling her pieces to other silversmiths. They would then over-stamp the sponsors mark with their own. But what is clear that she moved the business away from making wire and chains and instead became a silver-smith, making items such as spoons, forks, tea pots and decorative objects. After 1774 she was joined in the business by two of her sons, Jonathan(1747-1791) and Peter(1740-1825). Hester continued to head the business until her retirement at the age of 82. She died four years later in 1794, but by then the dynasty was well established and involved her daughter-in-law Ann (married to Jonathan), their son William and grandson William II.

During the thirty-year period when Hester was at the helm the business developed into one of the most successful silver-smithing businesses in the country. Hester’s items are renowned for their neo-classical designs, often adorned with bright-cut engraving, and with beaded edges and piercing. Her mark appears on tea-pots, jugs, caddies and sauce boats. She made decorated wine labels and inkwells, she made salt cellars and mustard pots. Trays, salvers and a vast array of household goods were produced. All had one thing in common: Hester’s attention to design and her absolute dedication to quality. She may not have been able to read or write, but she certainly knew how to impose standards of excellence. Along the way she must have been able to pick up a knowledge of book-keeping and accounts because without this she would never have survived. The soaring price of silver ingots in the period when she was in business meant that she would have needed to have kept a close eye on stock levels, mark-ups and so on. She exploited the ‘added value’ which her skills could bring, and she quickly became highly respected in what was a somewhat closed world of male silver-smiths.

The family became experts at using the latest technology to roll thin-gauge strips of silver (useful in competing with the new process of making Sheffield plate). They were brilliant at machine-punching decorations through the metal, at hammering, raising, planishing, burnishing and engraving. The only thing they do not appear to have tried their hands at was casting (and hence no examples of cast silver candle sticks with the mark HB are known). The sons had their own separate maker’s marks (WB, PB JB etc) but it is the silver which carries the mark HB which is perhaps the most collectible of all. Indeed she is rated as one of the finest silversmiths of her generation – with good reason. 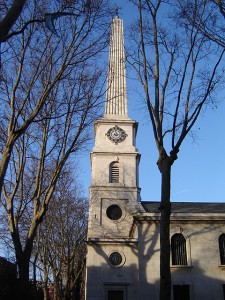 This remarkable woman was buried at St Luke’s Church, Old Street, London. Her legacy can be found in museums and galleries throughout the country. Her Verger’s Wand is apparently still in use at St Paul’s Cathedral, while examples of her work are found at the various Livery Companies in the City. She made her mark (literally) in a world dominated by men. As far as is known, she never left the very small area of London where she lived and died. She showed a gritty determination to succeed in a business where women were almost unknown, and all this despite an education which did little to prepare her for the challenges which she met and conquered.

Hats off to Hester – and a sincere ‘thanks’ to Lynne Connolly for bringing her to my attention.

Lynne’s next book is due to be published on 1 December and will be called Reckless in Pink, set in 1750’s London.  Her website is at http://lynneconnolly.com

Finally, I am grateful to Daniel Bexfield Antiques (website here)  for some of the additional information about Hester and her family.

Silverware by Hester, shown courtesy of the Museum of Birmingham, with its neo-classical lines so reminiscent of Sheraton and Hepplewhite.

6 thoughts on “Hester Bateman – an extraordinary woman: a brilliant silversmith, clever in business.”