Hop Step and Jump – from Napoleon to the Olympics. 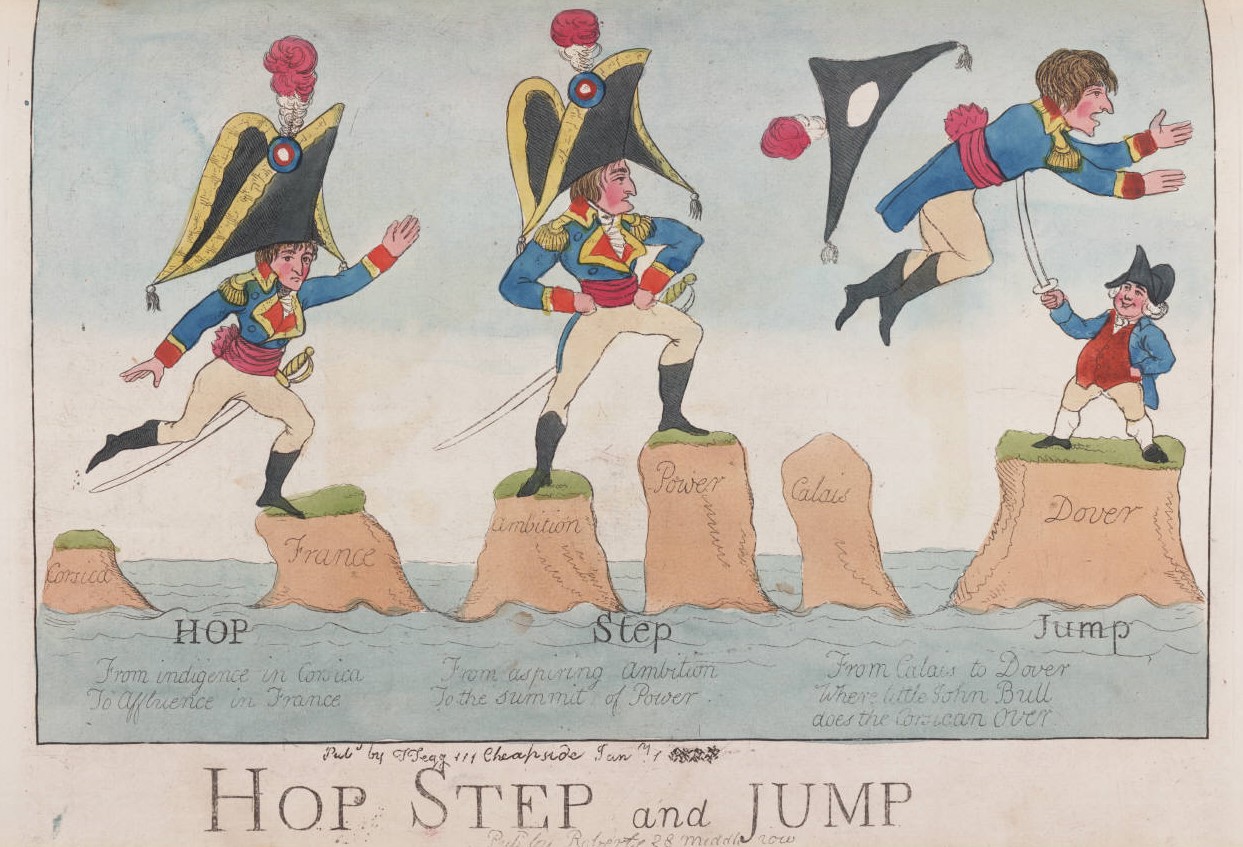 I have always thought that of all the Olympic sports, the triple jump was one of the most comic and ungainly (being ‘old school’ I still know it as Hop, Skip and Jump). So, as our athletes battle it out in Rio, I will take a look at an earlier caricature, entitled ‘Hop Step and Jump’ which first appeared in 1803 when it was published by Thomas Tegg. This impression was slightly later,  as part of G M Woodward’s series of prints in ‘The Caricature Magazine, or Hudibrastic Mirror.’ As usual, my thanks are due to the ever-helpful Lewis Walpole Library.

It shows Bonaparte starting off in Corsica, hopping into France and then, via Ambition and Power, preparing to take a step to Calais. The jump will take the Corsican bandit across The Channel to a certain fate – i.e. being impaled on the sword of our trusty John Bull. Against the waves are the words “From indigence  in Corsica to Affluence in France, From Aspiring Ambition to the summit of Power, From Calais to Dover Where Little John Bull does the Corsican over.”

It is a reminder of how England stood on the verge of invasion by Napoleon Bonaparte – hence the construction of the series of Martello Towers between 1804 and 1812. The authorities built a chain of towers based on the original Genoese Mortella tower (ironically, in Corsica)  to defend the south and east coast of England, Ireland and the Channel Islands against possible invasion from France.  A total of 103 Martello towers were built in England, set at regular intervals along the coast, and nearly four dozen have survived the intervening centuries of decay and stone-pillaging. Most were constructed under the direction of General William Twiss who was born in 1745 and died in 1827. This formidable engineer was responsible for constructing towers along the Kent and Sussex coastline as well as working on the defences at Dover Castle and the Western Heights complex in Dover.

What I had not appreciated was that the same Martello Tower design was repeated in places as far away as Quebec, Bermuda and Sydney – and I seem to recall one at Fort Recovery in the British Virgin Islands.

And as a total aside, who would imagine that in 1896 the Olympic Hop, Skip and Jump  (in Athens) was won by an American called James Connolly jumping 13.71 metres – whereas American Christian Taylor managed a leap of 17.21  metres at London in 2012. Tonight in Rio we will see if anyone can hop, step and jump even further….

1 thought on “Hop Step and Jump – from Napoleon to the Olympics.”