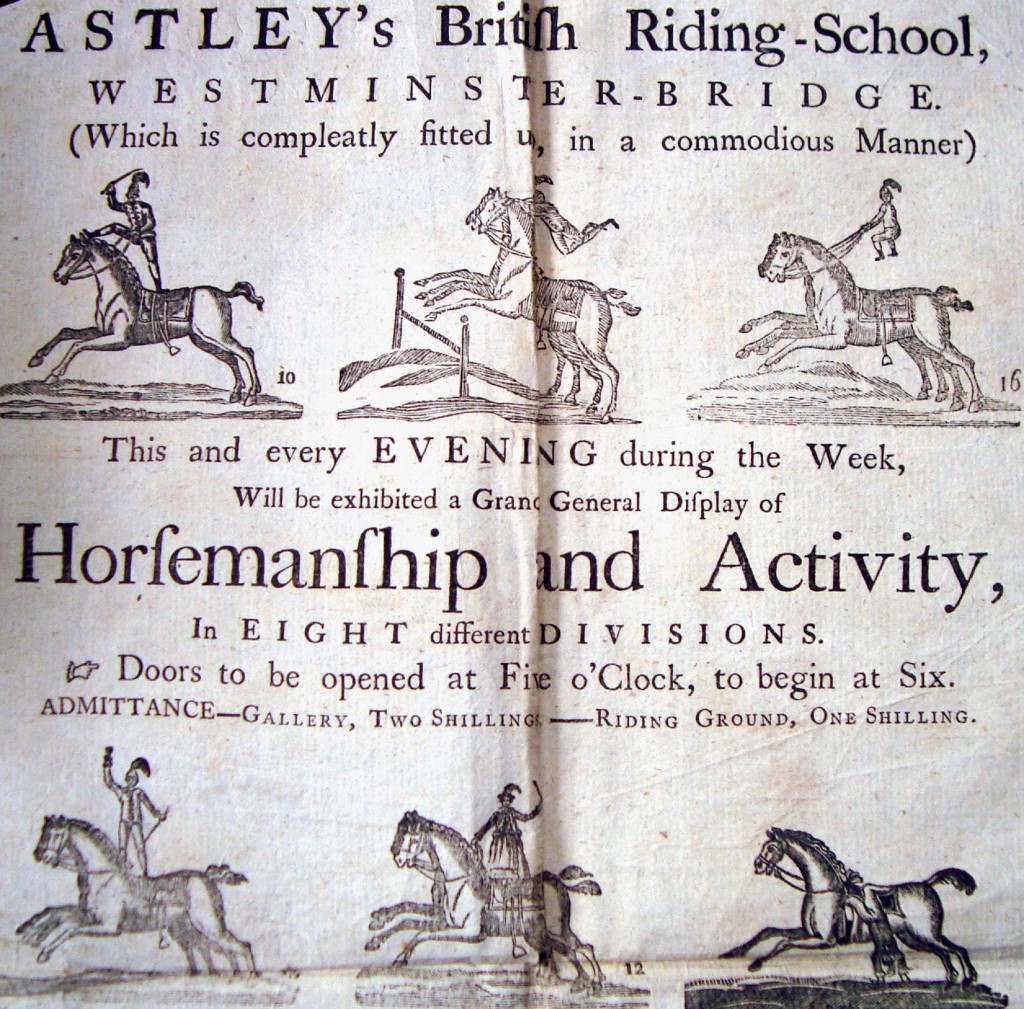 Some of us are good drivers, some are bad. I suspect that 250 years ago the same applied to horse riding skills and, as now, no-one admitted to being a bad horseman. That said, I have a suspicion that my ancestor Richard was not an especially good rider. On several occasions he remarks in his diaries that he was “Spared through Divine Mercy” when his horse bolted, or that he fell off his trusty steed while leaning over to open a gate, or whatever. That is not to say that he wasn’t interested in horse riding, as evidenced by the fact that he visited Philip Astley’s British Riding School  in the 1770s. He kept the hand-bill and would no doubt have marvelled at the dexterity of the riders, enjoyed the bare back and standing riders, applauded the flip-flaps and double sommersets,and so on. 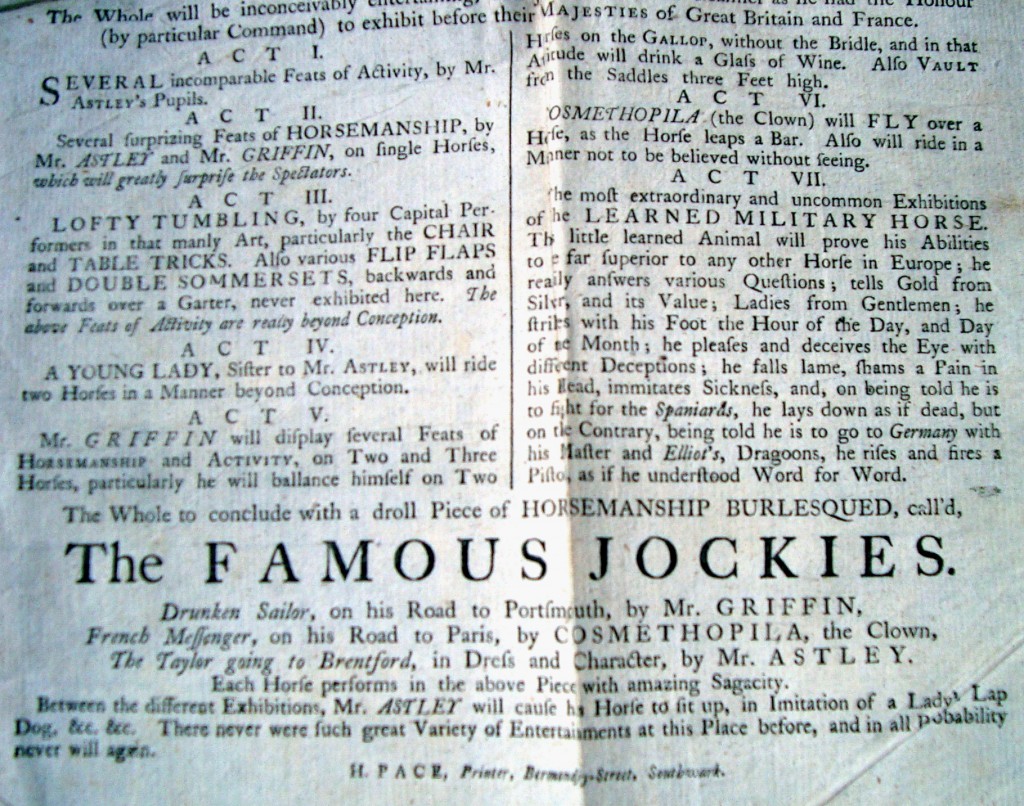 The name ‘circus’ was first used by Astleys rival Charles Dibdin, who opened his” Royal Circus” a few hundred yards away.  Astley’s emporium was situated just by Westminster Bridge and opened in 1768. I particularly like the cameos of horses with riders in various poses shown at the top of the poster.

A rather good description of Astley and his Riding School appears on the London Historian blogsite here. 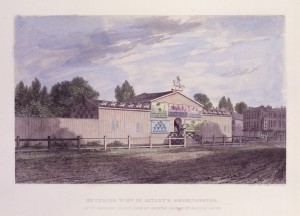 The exterior view of Astley’s premises 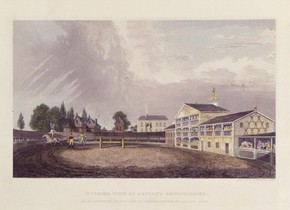 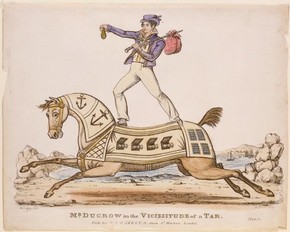 The three pictures above appear courtesy of the V&A site  which contains interesting details about the circus. 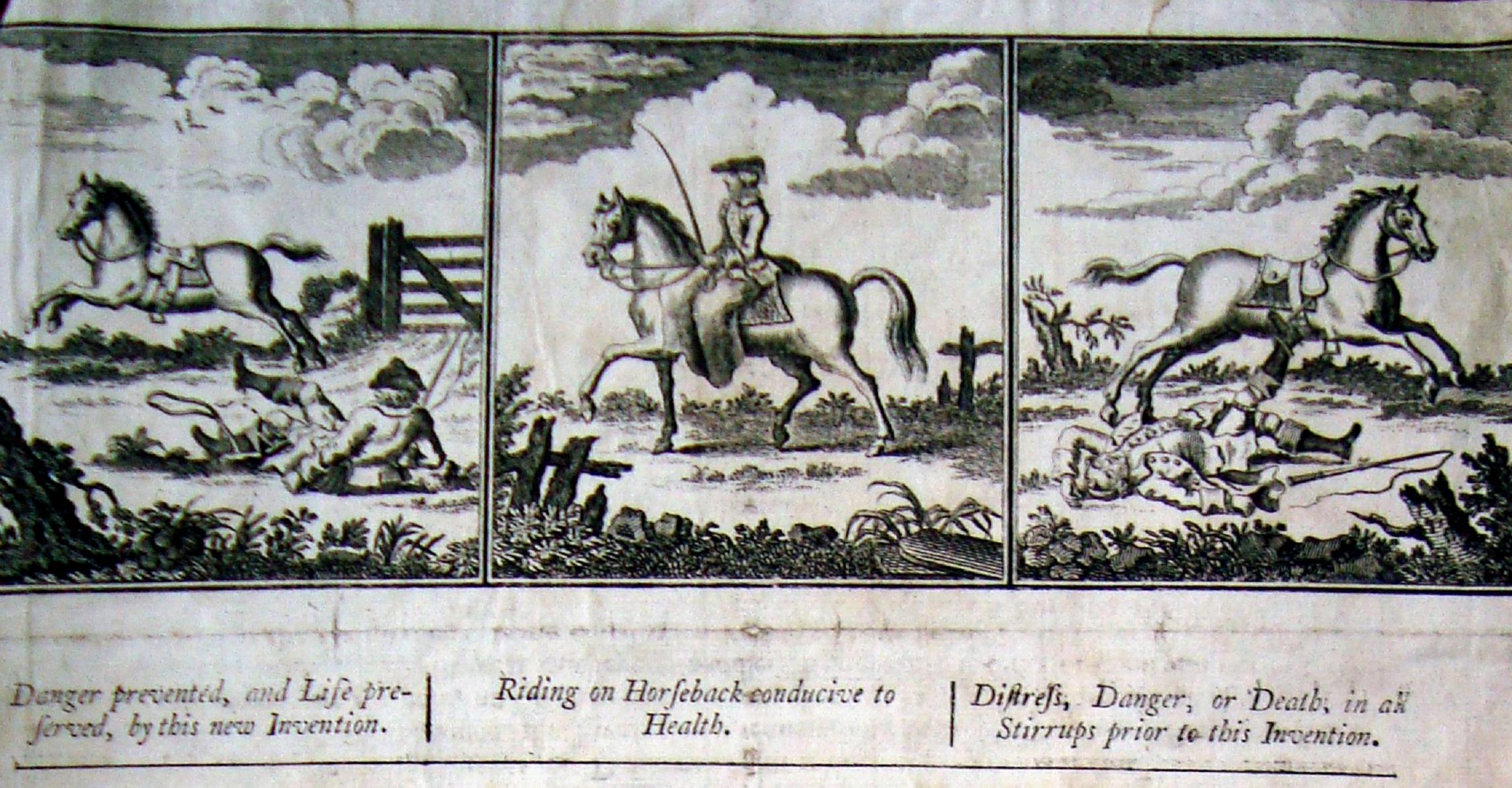 Next to the poster amongst Richard’s papers was a sales pitch for a special stirrup designed to prevent the rider being dragged along behind the horse when thrown. The fact that Richard kept it suggests that this was a concern of his – maybe it happened to him, though clearly not with the dire consequence mentioned in the sales pitch i.e. getting “ his scull fractured or Brains dashed out, and his Body otherwise miserably mangled and torn by the Fury of the Horses Motion and intervening Obstructions.”

The patented stirrups appears to have involved a release mechanism which was sturdy enough to withstand mounting and dismounting, and yet broke free under impact. A variant on the airbag in modern cars…

I love the caption to the picture showing “Distress, Danger or Death in all stirrups prior to this Invention” being contrasted with the central picture extolling the virtues of riding on horseback as being conducive to health.

To end with, a picture of a Lipizzaner doing the classic jump the Capriole: NOT one of Richard Hall’s specialities!

3 Responses to “Horsemanship, Astley’s Circus, and a rather clever line in stirrups….”