I love this caricature by George Cruikshank (1792-1878)  entitled ‘The Umbrella’ and dating from 1820. It rather reminds me of the Donald McGill cartoons from the middle of the twentieth century (but without the rude innuendo!). 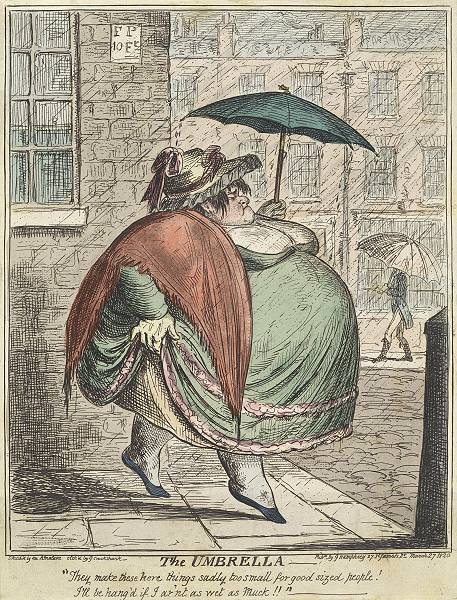 “They make these here things sadly too small for good sized people! I’ll be hanged if I ain’t as wet as  Muck!!!”

Which leads me on to a blog I did on posterous,  eighteen months ago, which started with a list of nick-names for the umbrella – brolly, rainshade, bumbleschute, gamp, Robinson, Hanway….

In the States they apparently use the name “bumbleschute” (at least in songs) i.e. part rhyming slang for umbrella ( = cloud) and part parachute. “Gamp” is the name of the Dickens character (Mrs Gamp) in Martin Chuzzlewit – she invariably carried an umbrella. “Brolly” is a more English shortened form of umbrella. And Hanway ? He was the man without whose perseverance in the 1750s in the face of ridicule and outright hostility we might still be facing the elements unprotected and unprepared! 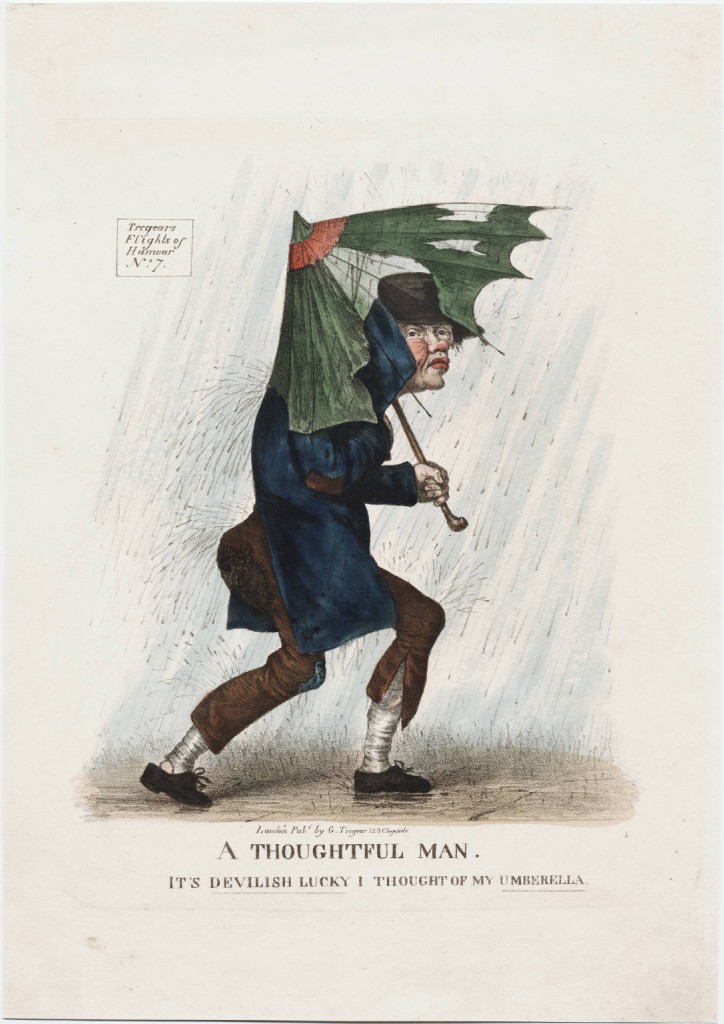 For years the brother of the umbrella, the parasol, had been a sign of high rank and elegance, protecting the person beneath it from both the sun and the common gaze. Daniel Defoe has his Robinson Crusoe construct a parasol of leather “I covered it with skins, the hair outwards, so that it cast off the rain like a pent-house, and kept off the sun so effectually, that I could walk out in the hottest of the weather with greater advantage than I could before in the coolest.” From this description the original heavy umbrellas were given the name of “Robinson,” which they retained for many years, both in England and France. They were made of oiled cloth or leather stretched over whalebone ribs and weighed as much as ten pounds – hardly an easy implement to twiddle above your head beneath leaden skies! 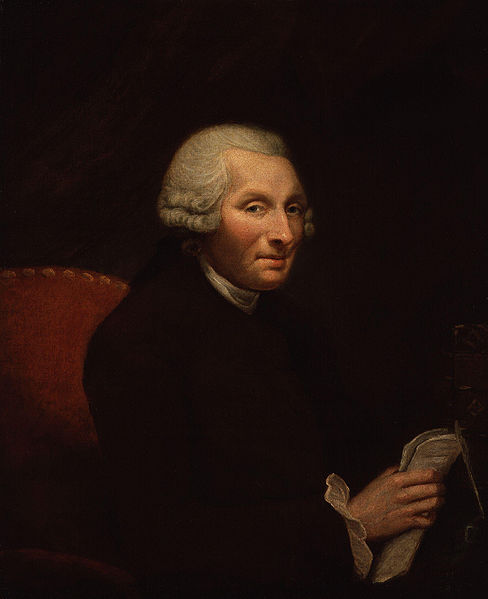 Jonas Hanway is generally credited with being the first Englishman to carry an umbrella being specifically designed to keep off the rain. He carried one constantly about the streets of London from the mid 1750´s onwards, until his death in 1786. The steel ribbed umbrella was still a century off, and initially wearers had to put up both with the weight and the insults from passers by. Anything outlandish and uber-fashionable was called “french” as a term of derision, and umbrella wearers would be pursued by cries of of “Frenchie, Frenchie” wherever they went. They also incurred the wrath of the coach drivers, whose trade depended so greatly upon pedestrians hiring their carriages with the sole intention of keeping dry in the rain.

It was not until 1786 that John Beale registered the first umbrella patent based on a circular coned canopy supported by ribs attached to a central shaft. 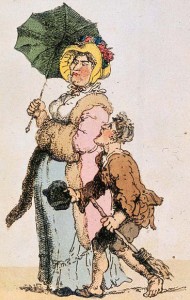 It would be unfair to say that Hanway was the first person to carry an umbrella. His design was almost certainly continental and it had been mentioned in literature often in the early part of the century, but he certainly popularized it and made its use acceptable. In the first half of the century Coffee Houses would use umbrellas to provide shelter for their customers alighting from their carriages while they were being escorted onto the premises, but they were never commonplace.

So who was this dry haired hero and paragon of fashion? Hanway was born in 1712 and died in 1786. He had travelled extensively in Russia and Northern Europe before returning to these shores to promote various philanthropic causes – he wrote and campaigned in favour of improved working conditions for child chimney sweeps; he advocated the abolition of tipping; but on the other hand felt that prisoners should be kept in solitary confinement throughout their imprisonment. He founded the Magdalen Hospital and was made a Vice President of the Foundling Hospital in 1772. 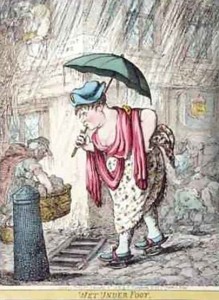 No post is complete without a Gillray, so here is one showing a lady of generous proportions clattering down the street in her patterns (raised metal frames to keep the shoes clear of the wet road surface). It is entitled “Wet under foot”

James Ince and Co are perhaps the oldest umbrella makers still in business, and indeed within a stones-throw of their original premises in Spittalfields.

So let us here it for Jonas Hanway, without whom Glastonbury and Wimbledon would be less pleasurable places to visit… 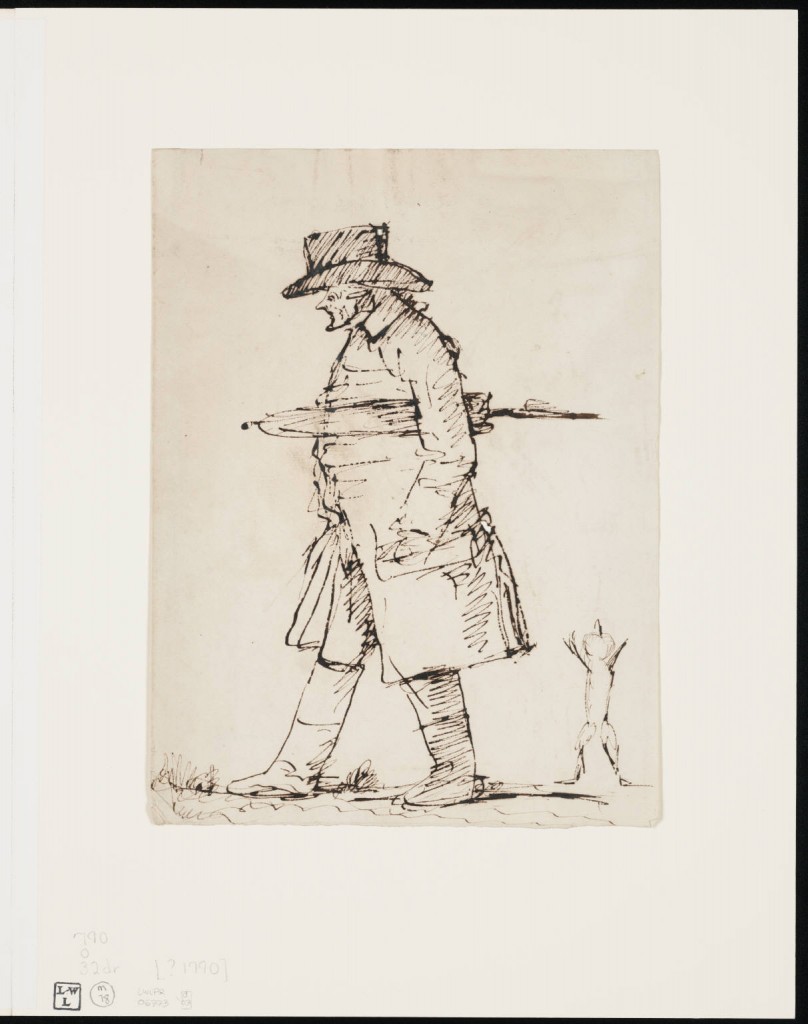 6 Responses to “Houston, I think we need a bigger umbrella…”