Little did I think, when I used some of Richard Hall’s paper cut-outs to illustrate “The Journal of a Georgian Gentleman”, that I would end up not only publishing a separate book, just on his paper-cuts, but also would be lecturing on the subject. It’s a strange old world…

Up until now it has mostly been to W.I.’s and history groups, but recently I received an invitation to give a talk at the Holburne Museum in Bath. It links in with an exhibition they are currently hosting on the works of a Frenchman called Auguste Edouart, who was exiled in Britain after the fall of Napoleon. He started off teaching French, progressed to making mourning pictures out of hair from the recently deceased, and ended up as a most prolific exponent of the art of taking silhouettes. Not for him a mere head and shoulders jobby, bronzed or highlighted with gold. He only did full-length portraits, always in plain, unadorned black, and over the course of 25 years he made tens of thousands of these silhouettes. He stayed in Bath and Cheltenham before going up to Edinburgh, and then spent  six years in the States cutting likenesses of all the great and the good. He obviously liked doing statesmen and politicians, but wasn’t averse to doing wealthy bankers, lawyers, entertainers – anyone as long as they were the movers and shakers of American Society.

Anyway, the  Holburne wanted a talk, combining the life and works of Mr Edoaurt with a look at the paper-cutting traditions in England  during the second half of the eighteenth century, so if you are anywhere near Bath at tea time on 22 September do come along! It is scheduled to start at three p.m. and should take three quarters of an hour and I will bring with me  several dozen of the original paper cuts made by my ancestor for people to see. I will even bring along his original pen-knife and a few of his diaries, as well as  giving people a chance to look at “The Journal of a Georgian Gentleman” and my booklet on the actual paper-cuts. 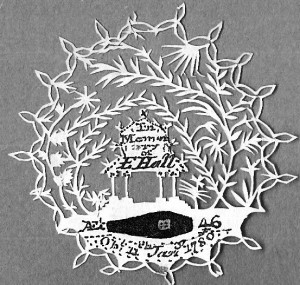 More details of the talk can be found here   – I hope to see some of my Followers there!