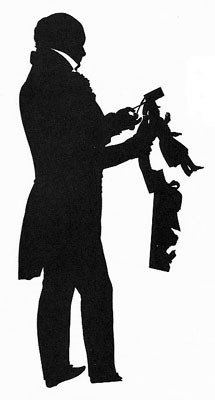 Edouart’s self-portrait – in other words he is showing himself in profile, cutting out his profile…

On Monday 22 September I am giving a talk about 18th Century paper-cutting at the Holburne Museum at Bath. It includes a section about the life and works of a remarkable French profile-cutter who rejoiced in the name of Auguste Armand Constant Fidele Edouart. He had been born in 1789, served under Napoleon, and fled to England as a penniless refugee when the Bourbon monarchy were restored to the French throne.

For a while he tried to eke a living teaching French to the English, and making mourning pictures – usually portraits on ivory, made with hair from the deceased. But one day he was shown a shadow picture (as silhouettes were called) which had been cut by a machine, Never modest about his talents, Edouart announced that he could do better – and promptly did just that! He describes the scene as follows:

“I … took a pair of scissors, I tore the cover of a letter that lay upon the table, and took the old man by the arm and led him to a chair. I placed him in a proper manner so as to see his profile, then in an instant I produced his likeness.

The paper being white I took the black snuffers” [in other words, candle snuffers covered in soot] “and rubbed it on with my fingers.

This likeness and preparation, made so quickly, as if by inspiration, was at once approved of… the ladies changed their teasing and ironical tone to one of praise and begged me to take their mother’s likeness, which I did with the same facility and exactness”

It led to a total change of course for Edouart – he gave up teaching, and hair pictures, and concentrated on what he called “silhouettes” – named after the despised French finance minister Etienne de Silhouette. The term ‘a la silhouette’ was originally intended to be derogatory, because the man was renowned for being a cheapskate. Etienne de Silhouette’s ‘crime’ was trying to balance the books of the French economy by melting down the  gold table settings used by the royal family, and replacing them with silver plate and gilt. For that he got the sack – and a reputation for being miserly. But Edouart was happy to adopt the term, in order to distinguish his profile cuts from the inferior ones made by machine. The point was: if you could afford it, you would have your portrait painted in oils; if not, you could have your profile cut out of paper for just a few pence. It was a substitute – but a very popular and effective one. 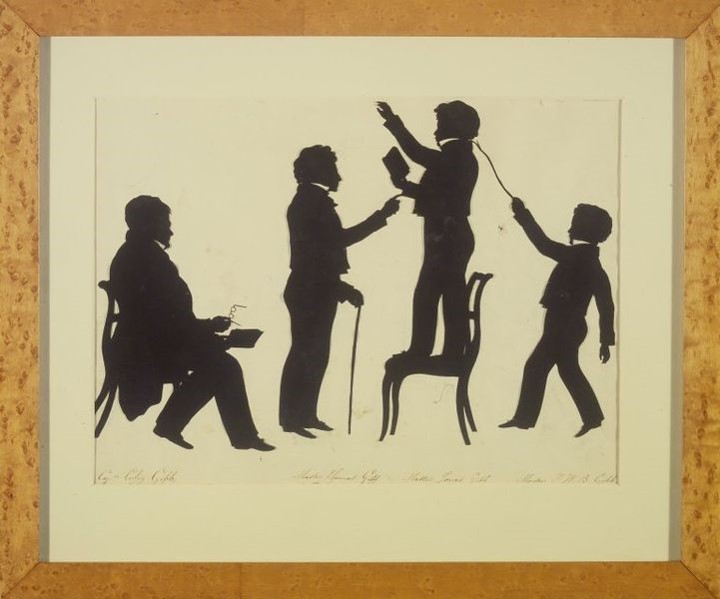 Note the small boy on the right trying to distract the boy on the chair, earnestly declaiming poetry, by tickling the back of his neck.

He spent time in Bath and Cheltenham before moving to Edinburgh, cutting hundreds and hundreds of portraits along the way. And then he decided that he would go to the States, and prepare likenesses of all the great and the good. His years there involved creating some 4,000 portraits, including profiles of four U.S. presidents, five members of the supreme court, six state governors, six college presidents, eighteen mayors, six commodores, thirteen generals, thirty state or federal court judges, fifteen authors, and at least twenty-nine physicians…. 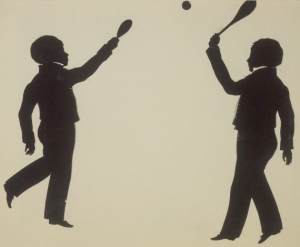 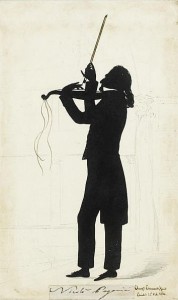 You get the impression that Edouart measured his own importance by the importance of the people whose likenesses he took!

He meticulously kept copies of every single silhouette he ever made – indexed and cross-indexed five times over, with the records kept in numerous leather-bound books. But by 1849 he decided to return to France – and set off aboard the good ship Oneida. The vessel got as far as the Channel Islands where it was wrecked in a bad storm – Edouart escaped with his life, but lost most of his luggage, including many of the volumes of duplicates. 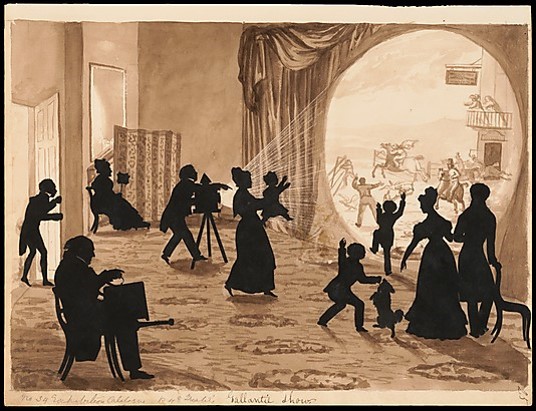 A magic lantern show, the silhouettes positioned against a lithographed background.

The poor man was devastated – he had set such store by keeping a complete record of his life’s work, and he suffered something of a nervous breakdown. Certainly he never cut another profile ever again. Mind you, his withdrawal from the world of silhouettes may have had something to do with the fact that Mr Daguerre had brought out his ‘daguerrotype’ in 1839. The same year had seen Fox-Talbot patent his system of recording photographic images on paper, and the new-fangled photography was spelling the death-knell of the silhouette. It was a shame – some of Edouart’s profiles are beautifully done, and his surviving cut-outs are a fascinating record of the movers and shakers of the period between 1825 and 1850, on both sides of the Atlantic.

If anyone is interested, come along to my talk at the Holburne  next week – tickets are a fiver. The talk accompanies an exhibition at the Holburne Museum, showing some of Edouart’s silhouettes cut while he was in Bath – and I will also be bringing along some of my own collection of dozens of cut-outs  from the 18th Century. More information about my collection can be found here. 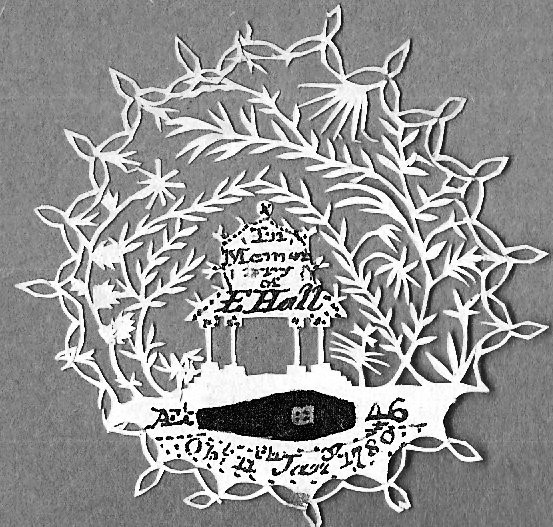