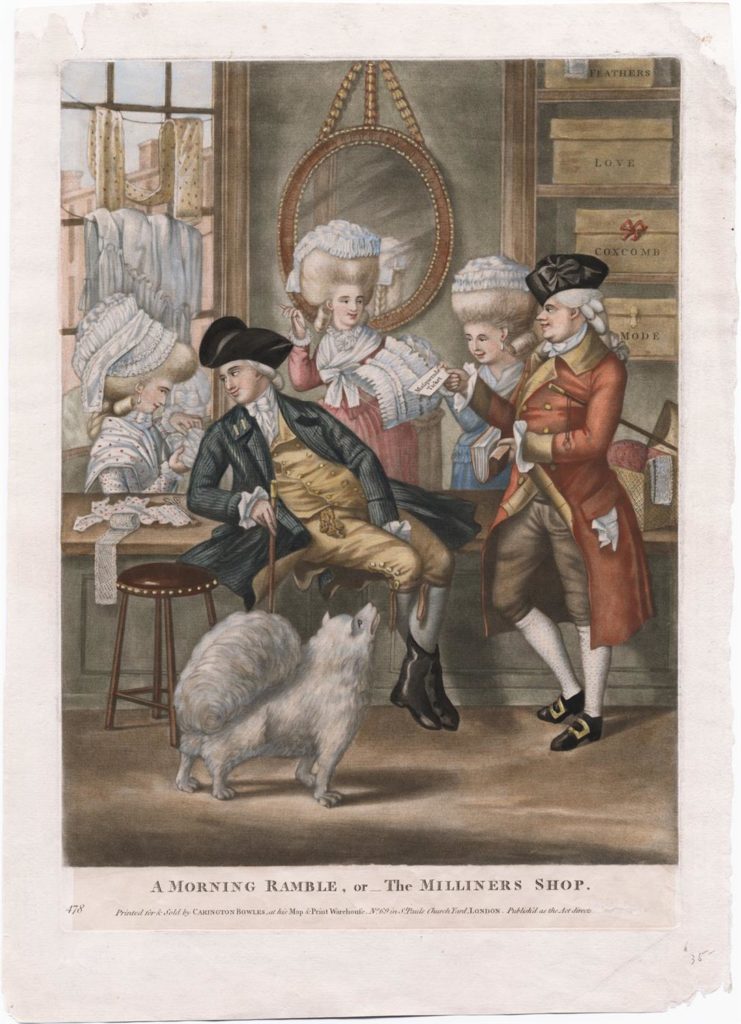 At present I am researching milliner’s shops in the 1780s – an esoteric subject, I appreciate, but one which is fascinating. It is part of my research into the life of an actress who will be featured in my next-book-but-one, on whores, harlots and mistresses who made something of their lives. This particular actress started life as a milliner and I was aware that ‘milliner’ was often a euphemism for ‘whore’.

The term ‘milliner’ extended to far more than making hats and  originally described the range of accessories and fashion items sold by travelling salesmen  from Milan. By 1747 the The London Tradesman could  describe a milliner as a retailer who would ‘furnish everything to the ladies that can contribute to set off their beauty, increase their vanity or render them ridiculous’. They worked alongside others in the fashion industry: the haberdasher supplied the fabrics, the mantua-maker made up the gowns, the stay maker made the stays and the milliner brought everything together and actually made  things fashionable. If you wanted to be a la mode, you went to the milliner. It was the milliner who supplied the sashes and ribbons, the ruffles and other accessories. It was the milliner who dealt in tippits, gloves, muffs – and exotic headwear.

But working in a milliner’s shop was not without its moral dangers: the same article in The London Tradesman stated that ‘the vast resort of young Beaus and rakes to millinery shops exposes young Creatures to many Temptations, and insensibly debauches their Morals before they are capable of Vice’. It went on to warn that ‘Nine out of ten young Creatures that are obligated to serve in these shops are ruined and undone: Take a Survey of all common Women of the Town, who take their Walks between Charing-Cross and Fleet-Ditch and, I am persuaded, more than half of them have been bred milliners, have been debauched in their Houses, and are obliged to throw themselves upon the Town for want of Bread, after they have left them. Whether it is owing to the Milliners, or to the Nature of the business, or to whatever cause is owing, the Facts are clear, and the Misfortunes attending the Apprenticeship so manifest…it ought to be the last shift a young Creature is driven to.’

So I was particularly keen to locate a print I came across a few years ago, published by Carington Bowles in 1782. I found it again on the Lewis Walpole Library site at Yale University and it is entitled ‘A Morning Frolic, or the Milliners Shop’. A differently coloured version can also be found on the British Museum site which describes the scene as follows:

Interior of a milliner’s shop, the counter running across the print, behind it are three milliners, dressed in the fashion of the day with elaborately frilled muslin caps on their high-dressed hair. Two fashionably dressed men are on the near side of the counter, intent on a flirtation. One, wearing riding-dress, sits on the edge of the counter, his legs dangling, while he leans on his elbow and looks over his right shoulder towards a pretty young woman who is sewing, seated in profile to the right. The other visitor (right) lounges against the counter as he hands a “Masquerade Ticket” to a young milliner. The third milliner stands; she is sewing at one of the elaborately frilled muslin head-dresses of the day.
The print shows the arrangement of a shop at this period. The shop-window is partly visible on the left, with wares for sale suspended across it on cords. On the wall is an oval mirror in a carved frame, while on the right shelves fill a recess in the wall and support boxes, inscribed “Feathers, Love Coxcomb, Mode”. An arched-top coffer, such as milliners in street scenes are depicted as carrying, stands open on the counter, a piece of lace hanging from it. On the near side of the counter is a tall circular stool for customers. In the foreground is a Pomeranian dog. 1782

The mezzotint was hand-coloured and is based on a water-colour by the artist Robert Digby. At that stage Carington Bowles was a well-known map-printer who also produced etchings from his shop described as being a ‘Map & Print Warehouse, No.69 in St. Pauls Church Yard, London’. I rather like the idea of the pair of rakish young gentlemen debating what to do with their morning, and deciding to go and chat up the young milliners in the shop round the corner. Armed with a ticket to a masquerade, perhaps at Ranelagh Gardens, they would have thought that they were onto a sure thing – one of the girls was bound to leap at the invitation. And everyone knew  what went on in the dark recesses and quiet alleyways at Ranelagh….