Inside a Regency haberdashery shop. 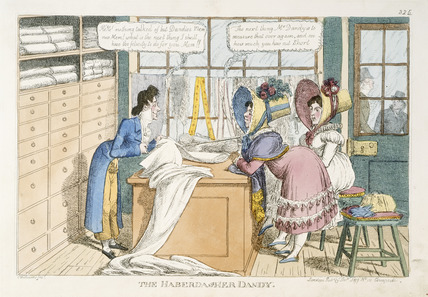 I recently came across this print on the Museum of London site  showing the interior of a haberdashery shop: it is fair to assume that this is what my ancestor’s shop at One London Bridge would have looked like with a low counter suited for cutting out lengths of cloth, and a fitted unit containing shelves and drawers. The picture is entitled The Haberdasher Dandy and dates from 1818. It shows the dandified shop keeper measuring out muslin for two ladies, both of whom are sporting ludicrously long poke bonnets. It looks as though the woman with her elbows on the counter suspects that she is getting short measure. In reply to his question “And what is the next thing I will have the felicity to do for you Ma’m?” she exclaims “The next thing Mr Dandy is to measure that over again and see how much you have cut short.”

It is interesting to see in the caricature that a line has been stretched across the window in order to display ribbons and lace hanging down.

I recall fitted units like the one shown, from the fifties, and a quick look on the web shows that even these “vintage” ones are highly collectable as storage and display items. These two are from  Christies.

Indeed they still have something rather similar at Rigby and Peller, corsetieres to Her Maj at their shop in Knightsbridge. Perhaps my family had similar units to these fitted out when the shop was built in 1767, although they were expressly excluded from the items covered by the expenditure of £111/11/5d recorded by Richard Hall in his diary.

The family shop was on the corner of Lower Thames Street and London Bridge  – both busy thoroughfares – and would have had windows opening onto two sides. I still have the trade cards for Bat (a type of cotton wadding) and Hall’s Velvet so I assume that the window displays would have consisted of small samples of fabric topped off with a descriptive card.

Unfortunately I do not have a copy of the bill-head or shop sign used by Richard – but am really grateful to the Fitzwilliam Museum in Cambridge who showed me this image from their collection, dating from the 1760’s. It is a receipt of purchases made out to a Mrs Blathwayte dated 1 December 1766 and is  signed by the proprietor John Skrym. It sets out the product range held by haberdashers and is an indication of prevailing “style”. 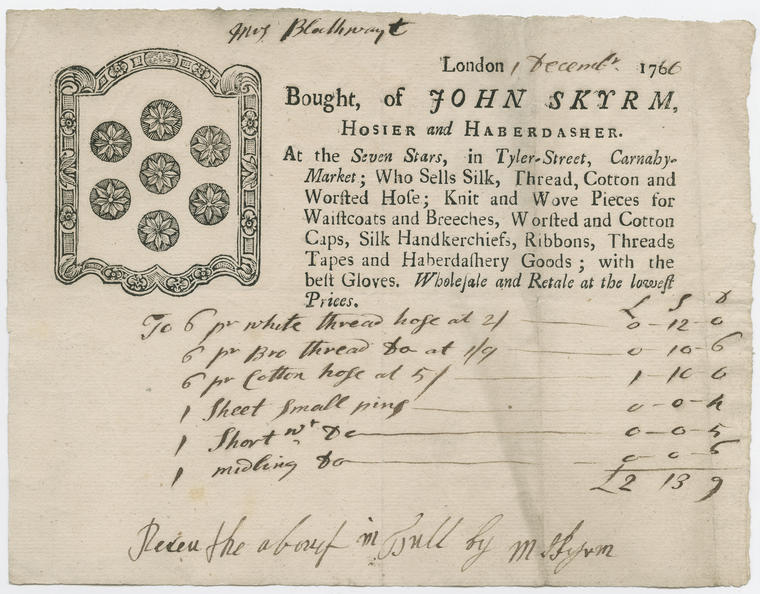 I know that my ancestor specialized in making and selling silk stockings, like this one, and that he could charge three times the price for a fine embroidered effort compared to a plain stocking. I imagine that these would have been kept in colour co-ordinated sets in different compartments of the display cabinet. 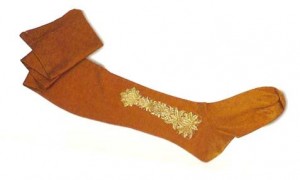 I suspect that with all the coloured fabrics on display the place would have been a riot of colour – not unlike the wonderful Aladdin’s Cave which is the Ray Stitch haberdashery shop in Angel (London. N1) I am grateful to them for the images of fabric, ribbon and ruffles and next time I am in London I will try and visit their emporium, which does look rather splendid!

5 thoughts on “Inside a Regency haberdashery shop.”