Given that interest rates are in the news again, I thought it might be helpful to see what Richard Hall had to say about the changes in interest rates in the period from the reign if Henry VIII through to George III: 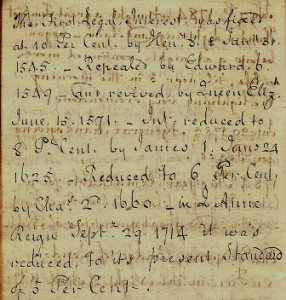 I am sorry that I cannot get the diary extract any clearer (the sermon on the other side of the paper keeps coming through!) but basically what Richard recorded is that on 31st January 1545 the Legal Rate of Interest was fixed at 10%, that this was repealed by Edward VI four years later, and then re-introduced by Queen Elizabeth on June 15th, 1571. It was reduced to 8% by James Ist. Charles II reduced it still further to 6% in 1660 (right at the start of the Restoration of the monarchy) and Queen Anne reduced it yet again on September 29th 1714 ‘to its present standard of 5 per cent’

Both Richard Hall and his brother in law William Snooke lent money to friends and colleagues, as well as to members of the aristocracy, at a rate of four and a half per cent. Hence at the date of his death Richard’s estate included a debt of one thousand pounds due to him from Lady Skipworth. Loans of up to a hundred pounds were dealt with by a simple I.O.U (i.e. a promissory note); from £100 to £1000 was covered by a bond i.e. under seal; and anything above that was protected by a mortgage.

2 Responses to “Interest rates through the ages”