Regardless of whether or not you like boxing, the fact remains that in the eighteenth century boxing  was hugely popular, and was regarded as fairer than duelling with sword or pistol. Huge crowds were attracted to bouts, which could last from dawn until dusk, and widespread gambling underpinned the contests.

7th December marks the anniversary of the death in 1734 of one James Figg, hailed at the time as the Father of Modern Boxing (or, as he would call it, the ‘manly art of self-defence’). 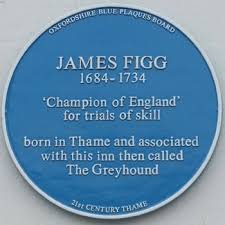 He had been born around 1695 to a poor farming family in Thame, Oxfordshire, the youngest of seven childen. Later he was to develop into a 6-foot tall, 185-pound athlete, who early-on exhibited a prodigious talent for fencing. He also mastered the short sword, cudgel, and quarterstaff. Later he took up the study of “boxing” as the unarmed combat, which had become popular in the late 1600’s, was commonly called. 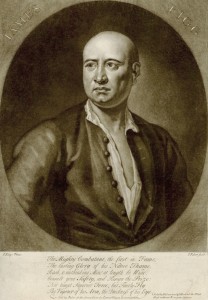 The “boxing”practiced by Figg was in a different league to what we know today: it was a no-holds-barred contest which would usually take place over 3 bouts, one of swordplay with a choice of live swords, daggers & shields; one of bare-knuckle boxing; and one of quarterstaff or cudgels. Bare knuckle fighting permitted eye gouging, hair pulling, spitting, head-butting, purring (shin-kicking), stomping and kicking downed opponents, as well as wrestling throws, and grappling whilst on the ground. The men who took part in these gladiatorial contests were called prize fighters – because they fought for a prize of a purse, or cups or free drinks etc. Of all these prize fighters, James Figg was the outstanding champion of his time.

He developed his own unique style  (known as ‘Figg’s fighting’) – rather than wading in and risking injury to himself he would sum up his opponent first and alter his style accordingly. He brought to boxing the thrust-and-parry skills he had perfected while fencing. If his opponent was a wrestler he would batter him with fierce blows; if the rival was a better boxer then he would grapple him to the ground to gain a submission. Figg prospered as he travelled the length and breadth of the country attending fairs and shows, challenging all-comers. He gained the patronage of the Earl of Peterborough and set up a fighting academy to train other pugilists, as well as a fighting stage known as Figg’s Amphitheatre’. Similar amphitheatres were set up in Hyde Park and in Oxford Street.

Figg went on to claim the title of Champion of  England in 1719.

The pub in Thame named after local hero James Figg

He defended his title on many occasions and is believed to have won 269 out of his 270 fights. The only blemish on his record was when he lost to Ned Sutton, a man he had previously beaten. 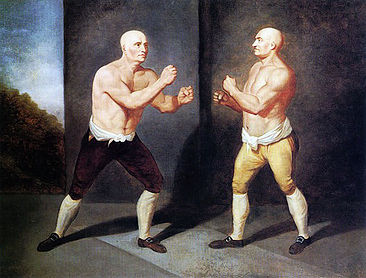 The decider was to take place on 6th of June 1727, in front of an audience of 3,000 spectators, including the Prime Minister Sir Robert Walpole. The first round was with swords and a cut to Sutton’s shoulder resulted in Figg winning that round. A thirty minute break was permitted before the start of the second round. This was bare knuckle fighting which Figg won by a submission. The third round was with cudgels during which Figg shattered Sutton’s knee to win the match and reclaim the title. Not the sort of man to run into on a dark night!

After 1730 Figg largely gave up fighting, concentrating on training and promoting others, in particular George Taylor (who succeeded him as Champion of England and who was to take over the business when Figg died) and the legendary Jack Broughton (possibly Figg’s own grandson, and a man who will get a post of his own in due course). It was Broughton who was the first to introduce rules for boxing (laying down regulations about the size of the ring, who holds the purse, not kicking a man when he is down, and the length of count). Under ‘Broughton’s Rules’ a fallen boxer would be given a count of thirty seconds to come up to his mark – a line scratched on the floor of the ring, If he failed to ‘come up to scratch’ he lost the bout. Prior to Broughton there was the chaotic situation where there were no weight divisions or round limits, and no referee. Broughton also brought in an early form of boxing glove or muffler, but these were used only for exhibition matches and for practice bouts in order to avoid the risk of injury to his trainees, many of whom were young aristocrats.

One Response to “Lest we forget: James Figg, the father of modern boxing, died 7th December 1734.”