Encountering anyone with autism, whether or not combined with savant syndrome, can be an extremely perplexing and fascinating experience. I always found a resonance with the Dustin Hoffman portrayal of Raymond Babbitt in Rainman – my own uncle had a similar pre-occupation with numbers, constantly counting and calculating totals.

So the focus today is about an enigmatic character by the splendid name of Jedediah Buxton, He was born in Derbyshire, near Chesterfield, in around 1702. Father was a clergyman, but Jed “emerged unscathed” from his rudimentary education at the local school, and spent his entire life unable to read or write. Not an auspicious start for a man who somehow or other contrived to make a reasonable living as a farm labourer. So how come that we know about him, and how come there are numerous versions of his portrait? More to the point, how did he manage to run his life so that he had a constant source of free beer? By his own calculations, he blagged his way to 5116 free pints, including 2,130 from the Duke of Kingston. The answer: mental arithmetic. 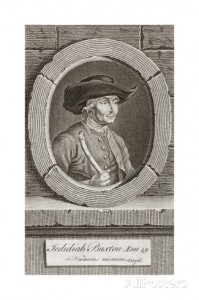 Engraving from The Gentleman’s Magazine, 1754

From the age of twelve Jedediah was pre-occupied with numbers – adding, subtracting, and multiplying. At its most basic level there was a purpose – he could walk a field, calculate its square footage and then divide the total to establish how many broccoli plants would be needed to fill the field if planted seven feet apart, in rows four feet from each other. Except that having worked out the number of plants, he then complicated matters by recalculating the square footage by reference to the number of barley corns (at three barley corns per inch) and then how many human hairs (at 48 hairsbreadth to the inch). If that wasn’t bad enough, he would then decide to multiply the resulting figure by itself – to give a massive figure which would take hours to calculate. Perhaps even more extraordinarily, Jed could down tools and have a drink, and then carry on with these calculations in his head at a significantly later date – sometimes days and even weeks later.

In working out these figures, Jedediah invented several new numbers, to enable him to cope with the concept of “millions of millions of millions”. He referred to “tribes” (a figure of ten to the power of eighteen) and “cramps” (ten to the power of thirty nine ). He was known to be set a challenge, go back to digging ditches in the fields, cogitating and calculating, then sit down in the local pub at the end of the working day and, armed with his free drinks, would finish the number crunching. His skill reached the ears of the editor of the Gentleman’s Magazine, who sent a Mr Halliday to interview Jedediah. He remarked that he found Jedediah to be “a very illiterate man,” though he had “a good notion of the square, oblong, triangle, and circle.” Commenting on his powers of concentration he said “He never regarded our talking, but sat as one heedless of everything about him, except his pot of beer, which he took notice of.” 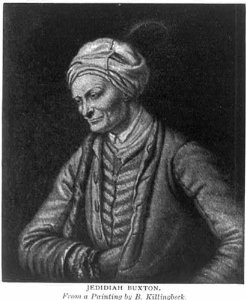 There seemed no end of people who would challenge Old Jed to work out obscure and utterly useless calculations – the number of hairs one inch long in a cubic mile (“586 thousand, 40 millions of millions, 972 thousand, 673 millions, and 24 thousand”).” But, if a hair be no longer than it is broad [i.e. 48 hairs to the cubic inch], he then came up with the answer that there would be 28 tribes,129 thousand, 966 millions of millions, 688 thousand, 305 millions, and 152 thousand hairs, to fill the space of a cubical mile.” Giss another pint!

Another favourite question dealt with the story of the famer who objected to the farrier charging him twopence a nail for the one hundred and forty nails needed to re-shoe all of his horses. “Well”, says the farrier, “what if I charge you a farthing on the first nail, double on the second, and so on?” “Right” said the farmer, only to discover that he had been well and truly had – Jedediah calculated that the farmer would end up paying the staggering sum of 725,958,238,096,074,907,868,531,656,993,638,851,106 pounds, 2 shillings, and 8 pence for his 140th nail – two to the power of 139, divided by 960 (being the number of farthings in the pound). In fact I gather from an interesting article by Steven Smith   giving full details of the calculation that the answer was wrong – various figures were transposed, although many of the figures are correct. As Eric Morecambe  might have said to Andre Previn “They are the correct numbers, just not necessarily all in the right order”.

Jedediah had married Alice Eastwood at Ault Hucknall Church and they had three children − John, Susannah and Sara. But in 1753 Alice died. The following year some sort of wanderlust got into Jedediah and he walked down to London (200-odd miles) to see the sights, take in a show, whatever. He also thought that he would call in and see the King, but George II was not at home. So he went to see a play – the performance was Richard III at the Drury Lane Theatre and it was a chance to listen to David Garrick declaim – but Jedediah preferred to spend the entire performance counting the individual words spoken by the great thespian, and, in the case of the dancers, calculating how many steps they took. (And no, I wasn’t aware that Richard III was that strong on dancers, but there you go). He also called in to say “hello” to the great and the good at the Royal Society, impressed them with his mathematical talents, and received a small stipend in recognition of his remarkable skills. He left the capital distinctly unimpressed by London, and headed back to the fields of his beloved Derbyshire, and carried on digging ditches and counting barleycorn for another eighteen years.

One story goes that in 1772 the Duke of Portland dropped in to make his acquaintance, and volunteered to come back and see Jedediah the following Thursday. Imagine the surprize felt by the Duke when Jedediah announced that he would not be seeing the Duke again, since he expected to die that very Thursday – and die he did at exactly the time specified by him. A neat calculation, and one which he got exactly right…. 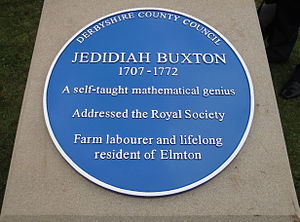 Jedediah was buried in the church in Elmton, the village where he was born and spent his entire life. A blue plaque commemorates his genius.