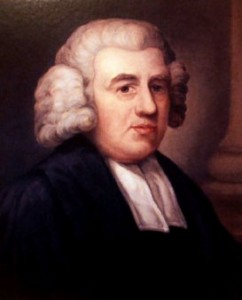 Tomorrow I head to Olney, the town where the Rev. John Newton preached  two and a half centuries ago. It will give me a chance to re-unite the town with a letter written by the good reverend  in October 1775. I am donating the letter to the local museum so that it can be appreciated by a larger audience and it gives me an opportunity of repeating a blog  which appeared in March 2016, and bringing it up to date:

John Newton was the fascinating individual who we remember today as the composer of Amazing Grace – fascinating because he was at one  stage actively involved in the slave trade, but eventually recanted and became a church minister campaigning tirelessly for abolition.

Not that he gave up his wicked ways overnight – despite an epiphany in May 1748 when the ship he was in nearly foundered off the coast of Donegal. The hull was smashed but the cargo broke free and miraculously wedged itself in the gaping hole – and the ship stayed afloat long enough to reach landfall.

It was a while before Newton abandoned all his links to the slave trade. The letter I discovered among Richard Hall’s papers show something of the inner torment he went through, including self-loathing, contempt etc.

I came across it in an envelope written by my great aunt Annie some time in the 1930s – I vaguely recall her from the 1950s when I was a kid, having to bellow into her silver ear trumpet to say ‘thank you’ for the pocket money (all of one penny, if I remember right) which she had pressed into my eager palm. I remember it because even then a penny was a tad derisory, especially as the old bat was loaded. By then she was well into her nineties, and I never saw her again. Mind you she was quite a character: she and her sister never married and lived together in a commune in a remote part of Wales, rearing goats and ingesting prodigious quantities of  cocaine, in one form or another. It was a while before I understood what ‘coke-head’ meant – but Annie was definitely on a higher plane than the rest of us!

She did have her faults – one was being tee-total (no, coke is OK but the demon drink is a dreadful scourge of the working classes…) and when her father died she rushed over to his home in London’s Park Lane, and promptly poured all the contents of his rather extensive wine cellar down the drain…. so I am none too proud of Aunt Annie!

She would seem to have recognized who John Newton was, and why he was important, but that didn’t stop her taking a sharp knife to the letter and cutting off the wax seal with the imprint of Newton’s signet ring (perhaps she collected seals. Maybe she flogged it … or smoked it for all I know). It did rather leave a hole in the letter, but beggars cannot be choosers… 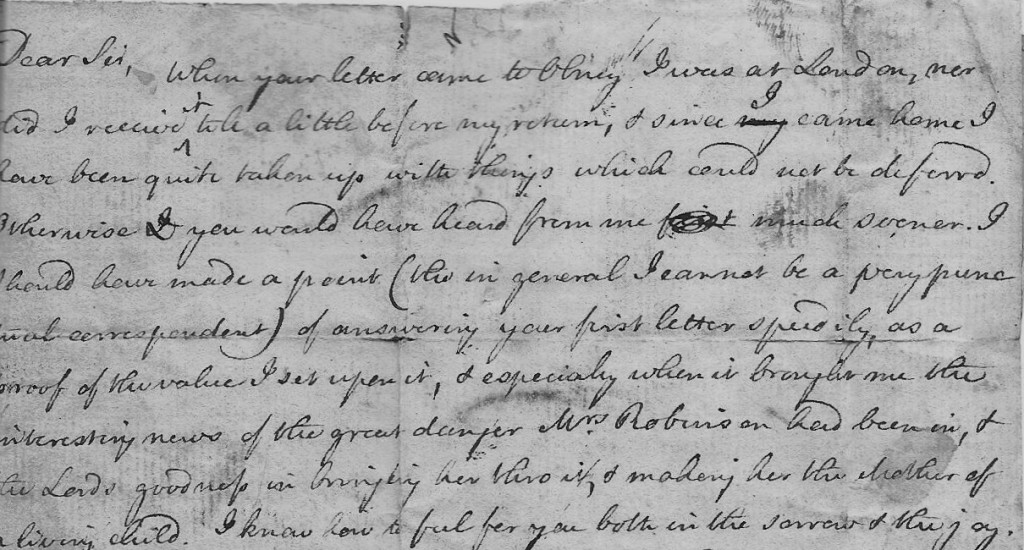 Anyway, the letter was written by John Newton on 2 October 1775. It starts off with the words “Dear Sir, when your letter came to Olney I was in London, nor did I receive it till a little before my return, and since I came home I have been quite taken up with things which could not be deferred. Otherwise you would have heard from me much sooner. I should have made a point (tho’  in general I am not a very punctual correspondent) of answering  your first letter speedily as a proof of the value I set upon it – and especially when it brought me the interesting news of the great danger Mrs Robinson has been in, and the Lord’s goodness in bringing her through it and making her the Mother of a living child.” 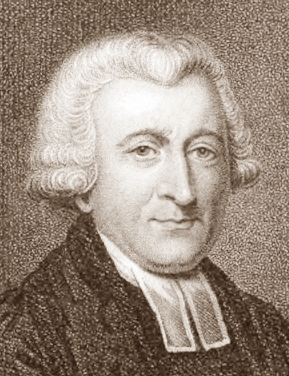 Mrs Robinson was the wife of the Reverend Mr Thomas Robinson of Leicester. Apparently in another letter from John Newton, addressed to John Thornton, he remarked: “that Mr Robinson preaches the gospel at Leicester…  Leicester is a dark place, but if the Lord is pleased to continue Mr Robinson there, who knows but that wilderness may soon blossom like the rose!”

Hmm, so much for Leicester. Some years earlier Rev. Robinson had apparently been passing through the town on election night and abhorred the place so much, and was so disgusted by the general behaviour of the population that he “had privately whispered a prayer to God that it might never be his portion to reside at Leicester”. The prayer was obviously muddled in transit, because back came the good Lord’s decision to make him accept the curacy of St Martin’s (now the cathedral). Not all our prayers are answered…

Robinson’s wife Mary (nee Boys) died in 1791 but at the time of Newton’s letter she had obviously just produced a son. I have no idea what happened to him.

The Newton letter continues: “The Providential turns in my life have indeed been very remarkable yet I can readily allow you to think your own case no less extraordinary, because you are acquainted with your own heart – I am a stranger to mine. Non omnia nec omnibus might have been the proper motto for my narrative. Alas the most marvelous proofs of the Lord’s patience and goodness to me are utterly unfit for publication, nay I could not whisper some things into the ears of a friend. It has been since my conversion, and not by what happened before it that I have known the most striking instances of the vileness and depravity of my nature. My heart, as the ancients fabled of Africa, has been continually producing new monsters…. I have good reason to believe that it is still comparatively  a terra incognita to me and that it contains treasures, mines, depths and sources of iniquity in it of which I have hardly  more conception than I could form of looking at the fishes that are hidden in the sea by taking a survey of the fish in Billingsgate.”

The next bit was excised by my aunt’s sharp knife cutting round the seal, but the epistle continues:  “… I believe most who are called by Grace can recollect previous periods of life when they felt something of the working of Grace put in with them and they derive instruction from them afterwards, yet I conceive that these impressions are for the most part different toto genere  from that great radical and instantaneous change which takes place within the moment of Regeneration when a new and truly spiritual light is darted into the soul and gives us such perceptions as we were before unacquainted with.”

The letter ends “Cease not to pray for us, and believe me to be Your Affectionate and obliged servant and brother, John Newton”

Unfortunately the letter in with Richard Hall’s papers is in poor condition – it has split down the folds and looks somewhat ragged around the edges. Originally it was what was known as ‘an entire’ – in other words it was folded up so that the address appeared on the outside, with the ‘wings’ tucked in on each side. So, no need for an envelope, making for a cheaper postage rate.

Newton wrote many hymns, the most famous being Amazing Grace, which he wrote for a service on New Year’s Day, 1773. In 1780 Newton left Olney to become Rector of St. Mary Woolnoth, London, where he became a particularly effective preacher and a friend of William Wilberforce. Newton died on 21 December 1807. He lived long enough to see Wilberforce’s bill abolishing the slave trade passed in Parliament that same year.

All in all, an interesting piece of history, and one for which I suppose I must thank good old Aunt Annie.  And I am delighted to find a good home for the letter – it has been on a very long journey! 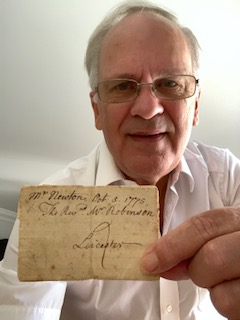 A post-script to the blog: it was great being able to call in and deliver the letter to the Museum staff at Olney. It left me with a lovely feeling that I had ‘done the right thing’. The staff were kind enough to turn out on a Sunday and if ever I had any doubts as to whether the letter was going to a good home, they were totally dispelled! I am so pleased it has a permanent home, in the UK, and has not been snapped up by a wealthy private collector! It can now be appreciated by all visitors to Olney – or at least, it will be once the Museum is able to open normally. At that stage I very much look forward to re-visiting the lovely Museum and meeting the enthusiastic and knowledgeable staff.

4 Responses to “John Newton, Amazing Grace, and a letter from Olney dated 2 October 1775”