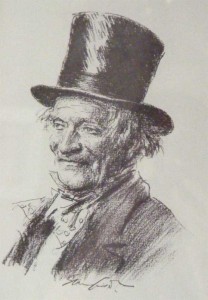 Prudence suggests I preface my words with a confession: I am not here to express an opinion one way or another about hunting. I have never hunted, but have never sought to sabotage a hunt either. I simply comment on the life of a man who lived to hunt (pine marten and hares mostly, but foxes if the chance arose). He is immortalised in a song, written in his lifetime by a close friend, and I thought it was worth finding out about the man behind the song.

The words were written by John Peel’s hunting companion, a man called John Woodcock Graves, in Cumbrian dialect. Graves frequently refined and altered the song, and over time some of the lines have changed. It seems clear that the original version referred to ‘a coat so grey’ – nowadays it is usually ‘a coat so gay’ (referring presumably to the fashion for wearing ‘hunting pink’, allegedly after the tailor named Mr. Pink. Legend has it he was a London tailor who bought large quantities of red material after the American War of Independence in 1783, and became popular for hunting attire. Mr Pink may however have been apocryphal since no-one has located his place or date of business).

It is in any event more likely that John Peel, a rugged farmer in a desolate area of the moors, hunted in a coat woven from the local Herdwick sheep, which are about as grey as you can get.

Grey rather than Gay – and certainly not Pink!
Herdwick rams – Courtesy of Wikipedia.

John Peel was probably born in 1776 – the records show that he was baptized the following year. The family lived at Greenrigg in the parish of Caldbeck, a remote area on the Cumbrian Fells where farming was hard and the population sparse.

When he was twenty he fell head over heels with the eighteen year old Mary White, daughter of a local (more prosperous) farming family. Her family were aghast and forbade the marriage. Mary’s mother interrupted the banns as they were being read with the words ‘I forbid the banns. They’re far ower young!’ Undeterred the impetuous John Peel borrowed ‘Binsey’ (his father’s fleetest horse) and eloped with his lovely lady. She shimmied down from her bedroom window at midnight (ah, the stuff of romance!) and together they galloped up to Gretna Green (across the border in Scotland). They returned, married, a few days later.

And the circumstances in which the song was written? Leave that to Graves, the song’s writer: “Nearly forty years have now wasted away since John Peel and I sat in a snug parlour at Caldbeck, hunting over again many a good run, when a flaxen-haired daughter of mine came in saying “Father, what do they say to what Granny sings?” Granny was singing to sleep my eldest son with a very old rant called “Bonnie (or Cannie) Annie.” The pen and ink for hunting appointments being on the table the idea of writing a song to this old air forced itself on me, and thus was produced, impromptu “D’ye ken John Peel with his coat so gray.” Immediately after I sang it to poor Peel, and I well remember saying to him in a joking style, “By Jove, Peel, you’ll be sung when we’re both run to earth.”

A paper cut-out of horse and hounds, made by my ancestor Richard Hall c. 1780.

For many years Peel kept his own pack of hounds – an expensive hobby, costing about £40 a year. He would start the day’s chase on horseback, mostly on his 14-hand dun gelding called Dunny, but would then abandon the horse to make the pursuit over the rough scree slopes on foot (a custom known locally as ‘chasing the ace’). 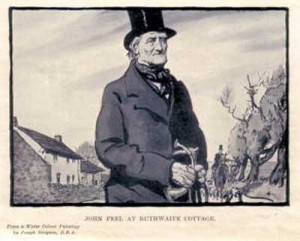 Typically he would set off at daybreak and hunt all day, covering as much as 50 miles of the roughest terrain before returning to sink a pint (or three) at the Sun Inn at Ireby. He must have made a striking figure – a tall man, who stood bolt upright, with chiselled features and bright blue eyes.

He died in 1854 aged 78 and is buried in St Kentigern’s Church at Caldbeck. 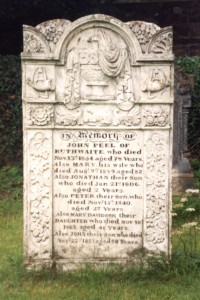 John Peel’s memorial, before it was desecrated and smashed by hunt saboteurs.

And Graves, the man who immortalised Peel? He went to live in Hobart, and died there in 1886. When I was in Tasmania a couple of years back I had the chance to look out his memorial in Hobart’s St David’s Park.

So, all together now:

D’ye ken John Peel with his coat so grey,

D’ye ken John Peel at the break of the day,

With his hounds and his horn in the morning?

For the sound of his horn brought me from my bed,

And the cry of his hounds which he oft-times led;

Or the fox from his lair in the morning.

Yes, I ken John Peel and Ruby too!

Ranter and Ringwood, Bellman and True,

From a find to a check, from a check to a view,

From a view to a death in the morning.

Then here’s to John Peel from my heart and soul,

Let’s drink to his health, let’s finish the bowl,

If we want a good hunt in the morning.

D’ye ken John Peel with his coat so grey?

He lived at Troutbeck once on a day;

Now he has gone far, far, far away;

We shall ne’er hear his voice in the morning.